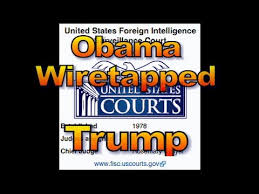 There really aren’t sufficient adjectives in this reporter’s vocabulary to adequately depict the unbelievable importance and outrage and danger of the consequences of this story.
It all started off early this morning when President Trump tweeted out:
“Terrible! Just found out that Obama had my ‘wires tapped’ in Trump Tower just before victory Nothing found. This is McCarthyism!” Back in June of 2016, just after it became apparent that Donald Trump would win the Republican nomination, the Obama administration went before the secretive FISA court to ask for a court order to listen in on everything that was going on inside Trump Tower – then candidate Trump’s headquarters. The justification was to investigate his ties with the Russian government.
That request was denied, but then in October, just a month before the election, the Obama administration put in another monitoring request to the FISA court. This request was focused on a computer server suspected of links to Russian banks.
No evidence of that was found. However, the taps were never turned off, and NSA continued to monitor and record all conversations and data transmissions right through the election, reporting to results to the White House.