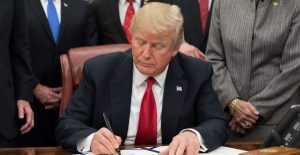 by Steven Nelson, published on Washington Examiner, on November 21, 2018

With Republicans poised to lose control of investigatory panels in the House of Representatives, President Trump is resurrecting a potentially powerful board capable of intimately reviewing intelligence agency conduct on his direct orders.

The White House announced five appointments to the Presidential Intelligence Advisory Board on Tuesday evening, after selecting a chairman and vice chairwoman earlier this year.

The dormant board created by former President Dwight Eisenhower has no formal powers, but derives significant authority directly from the president, operating as his surrogate to smooth over agency rivalries, investigate misconduct, and evaluate intelligence collection policies.

Experts say Trump could roil the intelligence community by asking his hand-picked panel to draft reports, for example, on alleged surveillance abuses against his 2016 campaign associates, a disputed charge made by Republicans on the House Intelligence Committee, who are poised to lose subpoena powers.

“The board can do whatever the hell the president wants it to do, and really it’s about what the president tasks it with,” said University of Notre Dame professor Michael Desch, co-author of the authoritative 2012 history of the board, Privileged and Confidential: The Secret History of the President’s Intelligence Advisory Board.

“If you really had an agenda and were willing to pick reliable people that are also people that are smart and knew enough to be dangerous, you could make life miserable for the intelligence agencies through the board,” Desch said. “If the president were really a competent political warrior, there would be a way to constitute the board in which it could really serve as a gadfly or a prod to the intelligence community, because it has a lot of access … if the president were willing to task it in a serious investigative way and then follow up, the board could be quite useful. But I don’t see President Trump being that serious and that bureaucratically savvy.”

The new members join board chairman Stephen Feinberg, a billionaire hedge fund manager and military contractor appointed by Trump in May, and vice-chairwoman Samantha Ravich, appointed in August. The board historically has had a small staff and office space in the New Executive Office Building near the White House. Members have security clearances and generally meet quarterly.

Desch said the new appointments “look pretty typical” for the board, with a wide variety of professional backgrounds.

Attorney Roel Campos, who served as a member of the board during former President Barack Obama’s first term, said he was unfamiliar with new appointees, but that “the board is essentially the tool of the president,” with historically wide-ranging influence.

“Each president essentially uses the board to his needs and liking,” Campos said. “Bottom line, it all depends on President Trump and how he plans to use the PIAB. … The board, to have any influence at all, has to have the full support of the president, then the board has tremendous influence and power.”

Campos doesn’t believe the board is well-suited to investigate Trump’s claims of 2016 surveillance abuses, which center on secret surveillance orders against former Trump foreign policy adviser Carter Page, saying it would be outside of the historical norms of the board’s work.

“If they are happy to do it, they can issue reports and take positions and they will be measured by the strength of their analysis,” he said. “If he wants something to sway public opinion he would have to have a group of people on the surface objective.”

But Campos added that the board hasn’t always followed the president’s wishes. Former President George W. Bush dissolved his board midway through his presidency after members objected to the use of interrogation tactics that critics consider torture, he said.

“Keep in mind, the board essentially stood up to George W. Bush and presumably most of the board were Republicans,” Campos said.

Desch, the Notre Dame professor, said one parallel to a hypothetical politically motivated Trump request is the board’s work on the “Team B” review of the CIA in the late 1970’s. That review found the agency was insufficiently tough in its Soviet analysis, Desch said, giving ammunition to a more hawkish policy later championed by former President Ronald Reagan.

At other points, Desch said, “it can be, like other boards, a beard behind which you hide. In the past it has taken on embarrassing issues like human rights abuses by CIA assets. You want the board on it to say you’re doing something.”

Steven Aftergood, director of the Project on Government Secrecy at the Federation of American Scientists, that it’s unclear how much the board’s work has mattered in the past, as much of its doings remain classified, and that its near-term future depends on Trump.

“The question that hovers around the new board is, does the White House really want its advice?” Aftergood said. “Will the president even listen to its recommendations? Or is board membership an honorary position that is otherwise inconsequential?”

Aside from the board, another largely dormant but historically influential intelligence review body is being resurrected with recent Trump nominations to the Privacy and Civil Liberties Oversight Board, an independent agency that issued public reports on mass-surveillance programs revealed by former National Security Agency contractor Edward Snowden.

A former Democratic member of the PCLOB, University of California at Berkeley professor James Dempsey, said he’s pleased Trump is re-establishing his advisory body, and doesn’t believe the board would necessarily go along with unconventional orders.

“Looking at their backgrounds, I would assume they will see their mission as supporting the intelligence agencies, not undermining them,” Dempsey said.