by Alexander Warren, published on USA Politics Today, on December 7, 2016 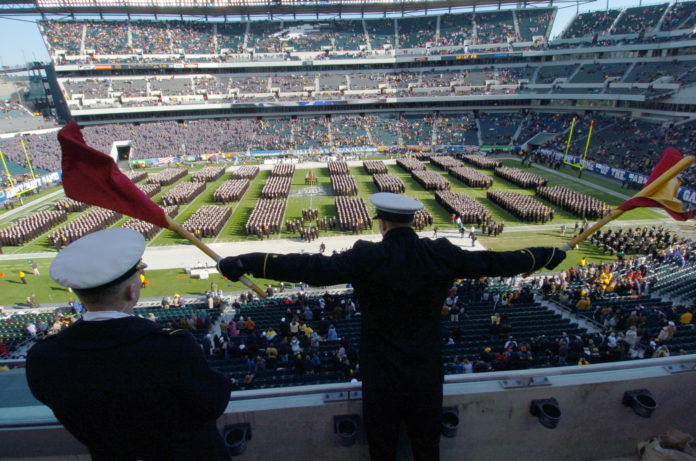 041204-N-9693M-006 hiladelphia, Pa. (Dec. 4, 2004) Ð Midshipman 3rd Class Michael Gocke, left, and Midshipman Reed Kitchen, signals to the brigade of midshipmen to turn and salute the opposing team during pre-game ceremonies at the 105th Army vs. Navy Football game. The Navy has accepted an invitation to play the Lobos of New Mexico University at the Emerald Bowl in San Francisco on Dec. 30. U.S. Navy photo by Damon J. Moritz (RELEASED)

Donald Trump hasn’t been wasting anytime since winning the election, nominating his cabinet, saving and bringing in thousands of jobs for America, and now he is going to do something that is the most American thing he could possibly do.

Donald Trump is going to attend the 117th Army Navy game. Obama could only be bothered to attend what used to be an American tradition for the president once during his presidency and Biden also came once.

Donald Trump is going and he isn’t even sworn in yet.

General James “Mad Dog” Mattis is a huge fan of the games so it will be a surprise if Donald Trump doesn’t bring him along with him.

Mattis had this to say about the Army Navy game.

Army-Navy games are an annual pilgrimage for the last 8 years for me. It is an awe-inspiring experience, full of pageantry, flyovers and a stadium filled with Americans who aren’t afraid to belt out our anthem and, like me, shed a tear or two as the gravity of the the choices our Midshipmen and Cadets have made truly hit home.

It is a football game, but it is so much more. The field and the stands are filled with our future officers, their proud families, the veterans who came before them and grateful Americans like me (who also happen to love football.)

The last time President Obama could spare an afternoon for these young men was 2011. Biden attended in 2012.

What a way to begin his official duties! Honoring our future leaders, veterans and all of the Americans who love and respect them.

In keeping with Presidential tradition, Trump is expected to seat with the Cadets for the first half and move to the Midshipmen side for the second half.

Donald Trump is already setting a great example as President-elect!

He is bringing back a presidential tradition that Obama didn’t want to bother with!