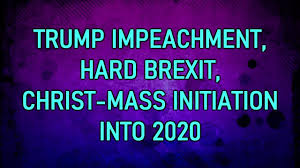 Magenta gives an update regarding the impeachment of Donald Trump, she discusses the probability of a hard Brexit since the election of Boris Johnson and speaks on the downfall and destruction of the inverted matrix, Illuminati, deep state structure. Magenta also looks at the starseed consciousness as expression/creation of the ascension timeline through humanity’s royal anointing at the time of the solstice, Christmas and the eclipse into the new year of 2020.