By Maura Dolan, Staff Writer published on the LA Times, on February 22, 2020 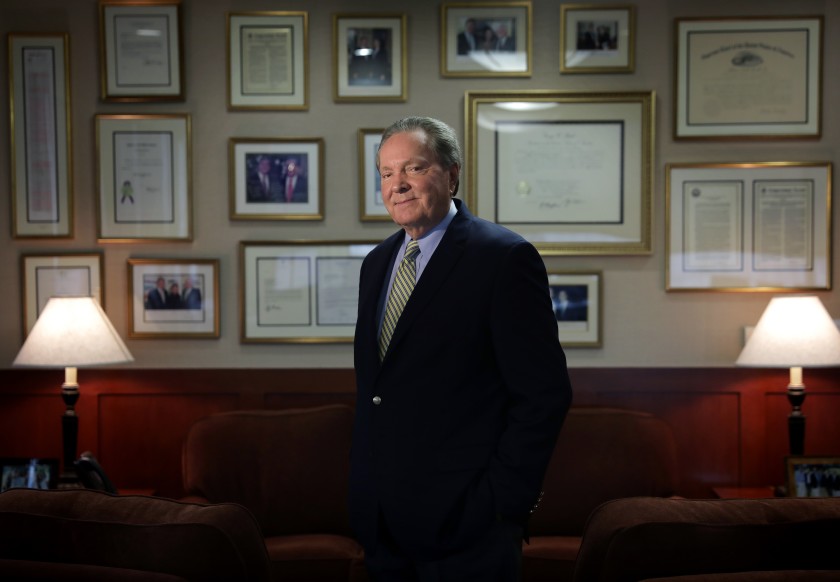 When President Trump ticks off his accomplishments since taking office, he frequently mentions his aggressive makeover of a key sector of the federal judiciary — the circuit courts of appeal, where he has appointed 51 judges to lifetime jobs in three years.

In few places has the effect been felt more powerfully than in the sprawling 9th Circuit, which covers California and eight other states. Because of Trump’s success in filling vacancies, the San Francisco-based circuit, long dominated by Democratic appointees, has suddenly shifted to the right, with an even more pronounced tilt expected in the years ahead.

Trump has now named 10 judges to the 9th Circuit — more than one-third of its active judges — compared with seven appointed by President Obama over eight years.

To assess the early impact of these appointments, The Times interviewed several judges on the 9th Circuit. Some either declined to discuss their colleagues or inner deliberations or refused to be quoted by name, saying they were not authorized to speak about what goes on behind the scenes.

To be sure, some of the new appointees to the 9th Circuit have quickly won the respect of their colleagues. But the rapid influx of so many judges — most without judicial experience — has put strains upon the court and stirred criticism among judges appointed by both Democratic and Republican presidents.

“Ten new people at once sends a shock wave through the system,” a 9th Circuit judge said.

Among those who have caused the most consternation is Judge Daniel P. Collins, a former federal prosecutor and partner of a prestigious law firm.

Some judges said that in the early months of his tenure, Collins has appeared oblivious to court tradition. He has sent memos at all times of the night in violation of a court rule and objected to other judges’ rulings in language that some colleagues found combative, they said.

Collins also moved quickly to challenge rulings by his new colleagues, calling for review of five decisions by three-judge panels, and some of the calls came before Collins even had been assigned to his first panel, judges said.

Active judges vote on the calls behind the scenes, and the public becomes aware of a failed effort only when dissents are later filed by the judges who favored reconsideration. Judges said it was unprecedented for a new jurist to try to overturn so many decisions in such a short period of time. The court has so far rejected most of Collins’ calls.

“Collins has definitely bulldozed his way around here already in a short time,” one 9th Circuit judge said. “Either he doesn’t care or doesn’t realize that he has offended half the court already.”

Collins did not respond to a request for an interview.

Democratic appointees still make up the majority of active judges — 16 to 13. But the court also has judges on “senior status” who continue to sit on panels that decide cases. Senior status rank gives judges more flexibility but allows them to continue to work, even full time.

Of the senior judges who will be deciding cases on “merits” panels — reading briefs and issuing rulings — 10 are Republicans and only three are Democratic appointees, Smith said.

“You will see a sea change in the 9th Circuit on day-to-day decisions,” Smith predicted.

The biggest change will come in controversial cases that test the constitutionality of laws and the legal ability of presidents to establish contentious new rules. The 9th Circuit is weighing challenges to Trump on a wide array of issues, from immigration to reproductive rights, and the rightward tilt is likely to make it easier for the president to prevail.

Only two of the 9th Circuit appointees have prior judicial experience — Bridget S. Bade and Danielle Hunsaker. They also are the only women among the court’s new judges. Three are Asian Americans — one an openly gay man who has two children with his husband. The other five are white men. Several went to the nation’s top universities.

The American Bar Assn. rated six of the 10, including Collins, “well qualified,” the group’s highest rating for circuit judge candidates. Three received the lower “qualified” rating, and one, Lawrence VanDyke, was found to be “not qualified.”

Though conservative, the Trump appointees to the 9th Circuit are not monolithic. Two Trump appointees — Bade, a former federal court magistrate, and Mark J. Bennett, a former attorney general of Hawaii — are regarded by their colleagues as experienced and collegial.

Trump appointee Eric D. Miller also has drawn positive reviews from both Democratic and Republican appointees. Before his appointment, Miller headed up the appellate division of a major law firm.

“I think he will be a good judge,” a 9th Circuit veteran said.

But Trump appointee Judge Ryan D. Nelson rattled other members of the court when he suggested during a hearing in August that the 9th Circuit remove a respected San Francisco district judge, Edward M. Chen, from a case. The 9th Circuit rarely takes cases away from district judges and only in extreme situations.

Chen, a former ACLU lawyer, was serving as a federal magistrate when Obama elevated him to the district court. Nelson complained about him during a hearing on a case in which Chen imposed an injunction on a Trump plan to take away protected status from many immigrants.

“You can reverse Ed Chen from time to time, but to suggest from the bench that are you are going to reassign” a case is “off the reservation,” one longtime 9th Circuit judge said. “Ed is an extremely well respected judge.”

“When he is in a china shop, he doesn’t walk around with caution,” the judge said.

Nelson, an Idaho lawyer who worked as general counsel for a wellness consumer goods company, did not respond to a request for comment.

Ninth Circuit Judge Kim McLane Wardlaw, a Clinton appointee, noted that most of the Trump appointees are still in transition, with the heat of the political process of Senate confirmation not far behind them. She said she was optimistic the 9th Circuit would continue to be collegial.

Another judge predicted that even the hard-charging Collins, educated at Harvard and Stanford, “will mellow.”

“I think he will be fine, though he will never be a go-along-get-along guy,” the judge said.

The behind-the-scenes tensions over Collins spilled into public last month in an order rejecting a call, presumably made by Collins, to reconsider a panel’s decision. The panel had upheld a lower court’s ruling in favor of suppressing evidence from a tribal officer’s search of a vehicle on a public highway. The highway ran through tribal land.

Collins, dissenting from the court’s refusal to reconsider, was joined by three judges, two Trump appointees and one appointed by President George W. Bush.

Two Democratic appointees whose ruling Collins wanted reversed wrote that even in the genre of such dissents, Collins’ was was an “outlier.”

“It misrepresents the legal context of this case and wildly exaggerates the purported consequences of the panel opinion,” wrote Judge Marsha S. Berzon, a Clinton appointee, and Judge Andrew D. Hurwitz, an Obama appointee.

“This case involves an unusual factual scenario and a technical issue of Indian tribal authority,” they said. “It certainly does not present a ‘question of exceptional importance’ meriting en banc consideration.”

The 9th Circuit court has been dominated by Democratic appointees for decades. In 1978, a federal law created 10 new judgeships on the court, allowing President Carter to fill them all. The liberal Carter appointees were followed by judges named by three Republican presidents and two Democrats.

Clinton’s and Obama’s appointees were not uniformly liberal, however, and the 9th Circuit has been growing more moderate. One study, examining the years 2010 to 2015, found that the 9th Circuit was the third most reversed by the Supreme Court, following the Ohio-based 6th and Georgia-based 11th circuits.

Smith predicted the full effect of the Trump appointees won’t be seen until 2021, when they will be carrying full caseloads.

But even now Democratic appointees are likely to be more reluctant to ask for 11-judge panels to review conservative decisions because the larger en banc panels, chosen randomly, might be dominated by Republicans, judges said.

That happened in July after a panel of the three Republican appointees upheld a Trump ruling denying federal family planning funds to clinics that referred women for abortions. A Democratic appointee called for en banc review, and a majority voted in favor. But the randomly selected 11-member panel had a majority of Republican appointees, including two named by Trump.

The 9th Circuit is by far the largest in the federal appeals court in the nation, and its judges are scattered over nine states.

Some judges elect to work alone with their staffs in offices or courthouses near their homes. Most 9th Circuit veterans have yet to have had any experience with the new appointees, and it could take years before they serve on a panel with each of them.

Trump appointed the successors to the late Judges Stephen Reinhardt and Harry Pregerson, two of the most liberal circuit judges in the nation and filled other slots created by Republicans who opted to take senior status.

The new appointees include Patrick Bumatay, the openly gay former prosecutor, and Daniel A. Bress, a former partner at the Washington, D.C., office of Kirkland & Ellis. The ABA rated both qualified. During a hearing in January on challenges to Trump’s immigration policies, Bress appeared ready to side with Trump.

The others are Kenneth Kiyul Lee, a partner in the Los Angeles office of Jenner & Block LLP, who received a well-qualified rating and VanDyke, a former solicitor general of Nevada and a federal deputy assistant attorney general.

In rating VanDyke unqualified for the job, the ABA wrote: “Mr. VanDyke is arrogant, lazy, an ideologue, and lacking in knowledge of the day-to-day practice, including procedural rules.” VanDyke cried during his confirmation hearing when attempting to rebut criticism that he might be unfair to the LGBTQ community.

Trump’s rapid transformation of the circuit courts — three others went from a majority of active judges appointed by Democrats to Republican majorities — was accomplished with the support of Senate Republicans.

Nominations of appellate judges may no longer be blocked by filibuster, and Republican Senate leaders have declined under Trump to follow the practice of allowing an appointee’s home-state senators to veto the president’s choice.

“Trump has set all records for the number of appellate appointees,” said University of Richmond law Professor Carl Tobias.

The federal appeals courts are just one rung below the Supreme Court, and federal judges serve for life.

Though some 9th Circuit veterans expressed unease at the inexperience of some of the new judges, 9th Circuit Judge Consuelo Callahan said they would grow into the job.

Four of Obama’s seven appointees had been judges.

“You have to learn to be a judge,” Callahan said.