Trump Confirms, The Economy Will Be Brought Down & It Will Be Chaotic – Episode 1276a and 1276b

Trump Confirms, The Economy Will Be Brought Down & It Will Be Chaotic – Episode 1276a 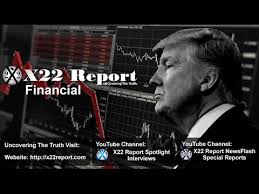 The condo market and the housing market is collapsing at a faster pace. World’s largest oil trade says there is no growth. Retail is contracting, credit is breaking down, JP Morgan Chase is telling smaller banks to combine deposits because there is going to be a problem later this year. The corporate media is now reporting that because of what Trump has done with Comey the economy will collapse. Trump then signaled that the economy will not hit the 3.0% GDP mark. Trump is now pushing the economy to collapse before the central bankers collapse the system.

Trump fires Comey and the deep state is now in panic. After the firing of Comey Trump met with Lavrov and soon after Kissinger. Schumer is flip flopping all over the place because they are starting to realize they are in trouble. Trump has just warned McCasters not to cross him again. Duterte met with China to talk about joining the one belt, one road initiative. As the deep state is pushing for war, Trump was planning something else with China and North Korea. The world is about to get more chaotic than ever before, the collapse is headed our way, Trump signaled with the firing of Comey that he will not sit by anymore and the old way of doing business is over.