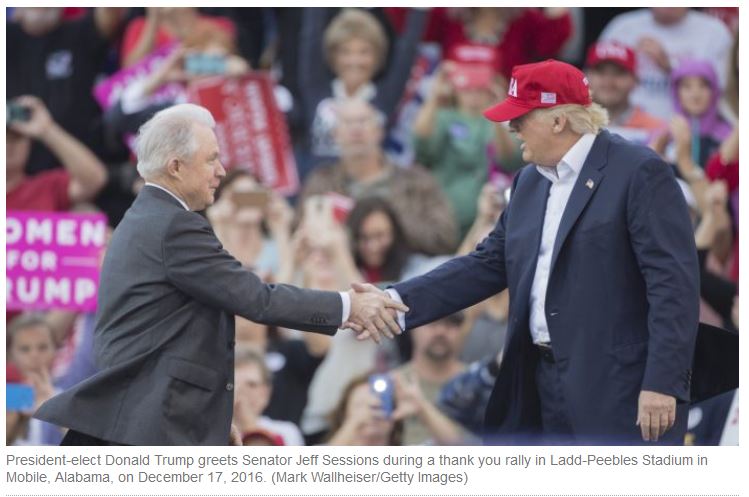 For the past several weeks, President Donald Trump has been ‘calling out’ his Attorney General Jeff Sessions on his Twitter account. A few recent examples:

Will Bruce Ohr, whose family received big money for helping to create the phony, dirty and discredited Dossier, ever be fired from the Jeff Sessions “Justice” Department? A total joke!

“Department of Justice will not be improperly influenced by political considerations.” Jeff, this is GREAT, what everyone wants, so look into all of the corruption on the “other side” including deleted Emails, Comey lies & leaks, Mueller conflicts, McCabe, Strzok, Page, Ohr……

….FISA abuse, Christopher Steele & his phony and corrupt Dossier, the Clinton Foundation, illegal surveillance of Trump Campaign, Russian collusion by Dems – and so much more. Open up the papers & documents without redaction? Come on Jeff, you can do it, the country is waiting!

In his response, issued through his spokesperson, Sessions didn’t say anything that he hasn’t been saying since he recused himself. He’s going to do his job to the best of his ability to enact the President’s agenda while making sure political activism does not occur within his agency.

Here’s what people need to know: The Trump/Sessions ‘feud’ isn’t real. Studying the beginning of the feud tells you this. The cover story is Trump fully believed Sessions was going to remain in charge of overseeing/directing investigations related to the 2016 election even though Sessions himself was a member of Trump’s own campaign team. You’re expected to believe Trump didn’t know about the conflict of interest or planned to completely ignore it. On top of that, you’re also expected to believe that Jeff Sessions didn’t give the President a heads up before recusing himself. Nothing in this narrative makes any sense.

Trump often uses a cover story to hide what he’s really doing. And the cover story often is crafted to give the impression that Trump is being a buffoon or a Triple-A Alpha Male with no clue what he’s doing. It’s an act, designed to keep his enemies out of his way.

Allow me to give several brief examples of the Trump White House deploying chaos narratives to hide the actual things being done behind the scenes until the Trump Team was ready to reveal them.

Little Rocket Man: For months Trump had the media and a lot of the political class in hysterics as he traded very public barbs with Kim Jong Un of North Korea, calling Kim “fat little rocket man,” and boasting that “my [nuclear] button works!” While Trump and Kim were ‘feuding’, then-CIA Director Mike Pompeo—already functioning as a defacto Secretary of State—was traveling in secret to North Korea & setting up diplomatic relations.

Not until the Trump administration was fully ready was it suddenly announced Pompeo was in North Korea. Nothing leaked. It was a complete and total surprise to the entire world.

The Scaramucci Fiasco: President Trump decided to replace outgoing White House Communications Director, and spokesperson,  Sean Spicer with his long time friend, businessman Anthony Scaramucci, a gregarious, outgoing fellow who never saw a microphone he didn’t want to talk into at length. Scaramucci lasted only a week and a half on the job, creating so many waves that White House Chief of Staff Reince Priebus threw his hands up in disgust and quit. Desperate to save a White House descending into complete chaos, Trump frantically brought over General John Kelly from the Department of Homeland Security to be his new Chief of Staff. Everybody in the political class then pointed their fingers at Trump and laughed loudly when Kelly’s first big move was to turn around and fire Scaramucci. What an embarrassing circus, right?

Well people need to go back and look again, as Nurit Greenger  at the Jerusalem Post did. Trump and Scaramucci conned everybody. Scaramucci was Trump’s ‘hatchet man’, the guy who was brought in specifically to shake things up, fire people [or make them quit!], then leaves, so none of the fallout touches the boss who brought him in. It was Trump’s plan to replace Priebus with Kelly all along. It took Scaramucci less than one week on the job to accomplish Trump’s goals. Most of the people in the political elite class still haven’t figured this one out.

Why would Trump expend such time and effort selling false cover stories to his enemies?

Both George H. W. Bush and his son George W. Bush made the exact same mistake when they were the President. They would reach out to the Democrats and the media and try to get them on board with their plans and their strategies, achieve comity with them. Both men spent their entire terms as President being ruthlessly sabotaged by the people they were trying to make into their allies.

Trump came into office having no comfortable illusions whatsoever about foreshadowing his actual plans to his enemies. This incoming President and his administration knew any real information the Democrats and the media got about his actual plans, policies, and strategies would be used to attack and sabotage all his efforts.

So upon assuming office, far from sharing his real plans, goals and strategies with the political DC class and the mainstream media, Trump began using “chaos narratives” to distract his enemies and frustrate their attempts to prevent him from achieving his goals.

The entire 10 month period from February 2016 to October 2016 in which the media and Democrats were thoroughly enjoying snarking at Trump over his “feud” with his own Attorney General, they were completely unaware of what was really going on at the Department of Justice.

Not until DOJ Inspector General Michael E. Horowitz suddenly began rolling out all the voluminous evidence he’d been collecting did people realize a stealth investigation had been underway.

Horowitz went in and dug up all the evidence of the Crossfire Hurricane plot while everybody was watching the President Trump and Sessions Traveling Roadshow™.

You only know the names Peter Srzok, Lisa Page, Bruce & Nellie Ohr, Glenn Simpson and Perkins Coie because of evidence Horowitz found. You only know about how it was the Hillary Clinton campaign that funded the creation of the Steele dossier & that top DOJ/FBI officials laundered that dossier by lying about it to the FISA Court because of Horowitz.

Trump and Sessions are still keeping people’s eyes firmly fixed on them. Once again, his enemies are looking in the wrong places.

Horowitz’s next report, the one where he deep dives into all the shenanigans involving the Steele dossier, Fusion GPS and the FISA Court, is going to hit like a nuclear bomb.

Brian Cates is a political pundit and writer based in southern Texas and the author of “Nobody Asked For My Opinion … But Here It Is Anyway!” He can be reached on Twitter at @drawandstrike