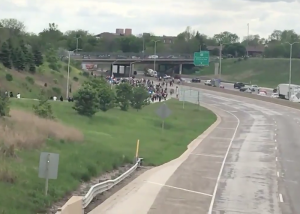 Truck drivers have spent the last year on the front line of a global pandemic and protests. Now many are fearful of what might happen if police departments disband or are defunded.

Truck drivers have been voicing their concerns on the CDLLife App. After reading about their concerns, CDLLife posted a poll on the app.

We asked drivers on the app, “Would you pick up/deliver to cities with defunded or disbanded police departments? Why or why not?”

As of June 13, 2020, we’ve had over 1,283 respondents and 79% say they will refuse loads to cities with disbanded or defunded police departments.

Here are some of their responses:

“…if something was to happen and you have to take matters into your own hands, and then you risk being prosecuted for protecting yourself.”

“This is not an area you need to act fearless and think you you’d look like a fool for saying no…Imagine what kind of fool you look like for driving into a hot spot and putting your life in danger.”

“I will not deliver to an area with a disbanded police department. My life matter and I do this for my family. We are already at the mercy of these towns and cities with laws and hate against us for parking, getting a meal or even using a restroom.”

“Simple. We may not like it all the time, but laws and order is necessary.”

“Most places we go already can be dicy an about only time you see a cop is when lights is on behind you.”

“For my own safety and security of my customers’ loads, I have already informed my dispatcher that I will refuse all loads to cities that have defunded their police departments.”

“According to the Associated Press, on Sunday, a majority of the members of the Minneapolis City Council declared that they support disbanding the city’s police department. Lisa Bender, the city council president, said, ‘It is clear that our system of policing is not keeping our communities safe. Our efforts at incremental reform have failed, period.’ Bender added that the city council is committed to terminating Minneapolis’ relationship with the police force,” Forbes wrote.

Other cities are planning similar but less dramatic options. For example, New York and Los Angeles said they will reduce budget and deploy other resources such as social and youth programs.

Read more about this here.

*Updated to reflect sample size. According to the National Council of Public Polling, “the average poll has a sample size of 1,000 adults.”