“Trauma Not Transformed Is Trauma Transferred” 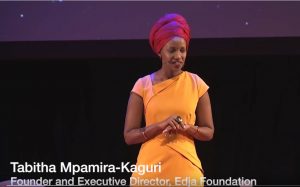 In this powerful talk, Tabitha recalls a time when she was consumed by an overwhelming desire to do something about the sexual violence and trauma she saw in her community. Trauma is like a relay baton, she says, trauma not transformed is trauma transferred. What kind of baton have you received and what will you pass on? more about her work here: https://www.edjafoundation.org/

Tabitha Mpamira-Kaguri is a founder and Executive Director of Edja Foundation, which is now partnered with Nyaka Aids Orphans Project. She works with girls and women who are sexually assaulted and/or have been victims of domestic abuse. Tabitha is Rwandan, grew up in Uganda as a refugee and currently lives in Michigan U.S.A for the last 18years, with her four children and husband. Having experienced complex trauma herself, she was moved to act on behalf of the victims by providing FREE medical, legal, and mental health support. In addition, doing outreach, and advocating to end gender-based violence because she strongly believes: “Enough is Enough.” Her work has been recognized by Global Citizen, where she won people’s choice award 2018. She has been invited to the The Vatican to speak about the urgency of the work to end sexual violence.

Tabitha is currently pursuing her Doctorate in Clinical Psychology but also practices as a mental health therapist. When she graduated with her Master’s Degree, she moved back to Rwanda and served women who had been raped during the genocide as well as their children. She is highly trained in trauma & diversity work. This talk was given at a TEDx event using the TED conference format but independently organized by a local community. Learn more at https://www.ted.com/tedx