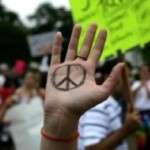 Humanity has reached a fundamental crux point. What do we really need right now?

The Industrial Military Complex is taking over, seeping into all aspects of our lives. Humanity is being aneasthetised and downgraded. The system is designed perfectly to retard our spiritual evolution; to prevent true, empowered human beingness and interconnectivity with the whole of life. It’s become increasingly challenging to be our true selves.

It’s time for non-compliance with injustice and inequity in the system. It’s time to transform humanity, time to reclaim our spiritual power…

The Power of Non-Compliance

Fueled by consumer demand, large corporations are exploiting the earth and seriously damaging the environment. What can we do about it? The power is in our pockets. Money makes the matrix go around! You have enormous power in your decisions of what not to buy.

You and I could begin an absolutely unstoppable revolution that would change the world for the better of all life, and we don’t even have to take to the streets to do it.

As Gandhi fought for Indian independence through non-violence, we can take a leaf out of his book through “non-compliance”. He made personal choices that became an example to others. So he chose to wear a home-spun clothing in order to encourage self-sufficient village industries and thus help alleviate poverty in India. If we stopped buying clothes produced in globalised sweat-shop servitude, that creates wealth for the few who then control us with it, that would immediately start tugging and unraveling the threads of the controlling matrix in which we live.

Likewise, if we chose organic and not GM food, we’d stop contributing to the destruction of our oceans and our top soil eco-systems. In the process, we’d stop lining the pockets of big business who then buy the politicians that pull the wool over people’s eyes, plus we’d find ourselves more healthy in the bargain and our consciousness would expand through the reduction of internally polluting excito-toxins. If just a small percentage of us had the courage to do this, whatever the apparent extra cost might be, the financial system would collapse very quickly bringing with it globalised destructive business and many (if not all) of the corporations that control governments and us.

Right now, we are living not in one world but two. There is the old one of the old values, injustice and inequity. But we can also access another world through the choices that we make. If we choose non-compliance with the old system in everything that we consume, then we’ll find ourselves increasingly accessing a higher vibration. The new world becomes increasingly a reality for us. We’ll feel it in our hearts, our consciousness will expand and what’s more, as more people do this, we’ll accelerate the collapse of the old system around us.

So do you wish to change the world for the better of all? Then I advocate ‘non-compliance’ with the current system, and instead, allowing this state of surrendered openness to guide you.

From my heart to yours,

(on behalf of Openhand)

1 Comment to “ Transformation of Humanity: Reclaiming our Spiritual Power”