As an emergency physician and attorney, let’s talk masks. First let’s not tiptoe around the great big elephant in the room. The facts are not in dispute: masks are completely irrelevant to blocking the SARS-CoV-2 virus. If you doubt that, you must watch our educational session debunking the myth of masks. I encourage everyone to do their own internet search and discover that prior to masks becoming political in March 2020, there was never even an attempt at a pretense that masks, let alone bandanas, stop a virus. It’s a complete fabrication. A virus is 1/1000 the size of a hair. Consider what Emperor Fauci said, when asked if he’s SURE that masks work. Now remember, he is not new to the game, this has been his life’s work for decades. There is NO chance this was a mistake and there is NO chance that SARS-CoV-2 is different than any other RNA virus that he has made his life’s work for decades.

“When you’re in the middle of an outbreak, wearing a mask might make people feel a little bit better and it might even block a droplet but it’s not providing the perfect protection that people think that it is. And often there are unintended consequences; people keep fiddling with the mask and they keep touching their face.”

“It is also clear that masks serve symbolic roles. Masks … are lucky charms that may help increase HCW perceived sense of safety, well-being … Although such reactions may not be strictly logical, we are all subject to fear and anxiety, especially during times of crisis. … Expanded masking protocols’ greatest contribution may be to reduce the transmission of anxiety.” The NEJM. -1 min

I will put it to you plainly my fellow Americas: you have been lied to by the media! Propaganda is not a new phenomenon. Thomas Jefferson said: “The man who reads nothing at all is better educated than the man who reads nothing but newspapers.” And John F. Kennedy pointed out that it does not matter if the propaganda had a sinister purpose. “The great enemy of the truth is very often not the lie … but the myth: persistent, persuasive and unrealistic.”

These days Americans fall into three groups: those who recognize the propaganda, those who have been successfully propagandized, and those who don’t care – we’ll leave them out of it. My message is for mask believers who have not yet realized they are victims of propaganda and who also think its “no big deal” to force other people to wear a mask. In fact, there are three enormous problems with mask mandates.

First, mask mandates are spreading fear and hostility that is changing American culture. We are less friendly, less interactive, more hostile, quicker to be angry with our fellow citizen. Masks are very socially divisive. There is mask shaming and mask virtue signaling; there is #socialcompliance and there is citizen policing of sidewalks and airplanes and restaurants. And in addition to hostility, masks bring a palpable sense of fear that is totally unwarranted by the facts. There are actual human beings who believe they or others will be harmed if they don’t wear a mask. This is tragic.

Second, mask mandates cause an insurmountable civil libertarian issue. In the American legal system, the government cannot force a facial covering because all rights not expressly given to the government belong to the people. The government has neither common law nor statutory right to mandate clothing. Encroaching on a right that belongs

to the people is extremely dangerous. One of our Founding Fathers, 4th President James Madison said: “(… there are more instances of the abridgement of the freedom of the people by gradual and silent encroachments than by violent and sudden usurpations.) It is proper to take alarm at the first experiment on our liberties. We hold this to be the first duty of citizens and one of the noblest characteristics of the revolution. The Freemen of America did not wait till usurped power had strengthened itself.”

Third, wearing masks is a national security issue. When most of the citizenry of our country can be so easily persuaded to do something that is so clearly against our own Constitution, our enemies certainly take notice. We are quite literally telegraphing our weakness and social divisiveness to our enemies.

Now, to those Americans whom are genuinely afraid: we are physicians. We are here to help you with facts that will reduce your fear. First the facts, then the emotion, then the call to action.

First, the facts. Notice that what the “experts” have said for months has been wrong – there are not two million dead, our healthcare system was not overwhelmed, there were 10x the ventilators we needed, nearly everyone survives, and early treatment works. You must not ignore your own life experience! If all you had to do to stop a virus is hold a tissue paper to your face, our ancestors would have learned this centuries ago and your grandmother would have taught you this!

Second, the emotion. Consider what President Jefferson said 200 years ago that newspapers are propaganda and also what President John F. Kennedy later pointed out, which is that it does not matter if the propaganda is a lie or a myth. Kennedy said: “The great enemy of the truth is very often not the lie … but the myth: persistent, persuasive and unrealistic.” Realize just because you believe or feel something is true does not make it true. There has been a massive propaganda campaign to get you to believe something. But you have it within your own power to disprove the propaganda. How? An Internet search proves that no scientist ever believed surgical masks (let alone bandanas!) were relevant against a virus, right up until Covid-19. The myth of masks came from politicians and when something happens in politics, you can be darn sure it’s done for another purpose.

Third, a call to action to the mask believers who have been angry at people who won’t wear a mask – I call on you now to double your anger! But direct your anger toward those people who have lied to you – it is people who are angry who have the power to fix the social divisiveness. We need you to put your anger squarely where it belongs. Unleash all your fury on the professional media complex that has lied and lied and lied to you.

And the final call to action for all Americans: so-called experts keep telling you that a bandana can stop a virus that is 1000x smaller than a hair. How stupid do they think you are?! To all Americans we say: We will be fooled no longer!

“The tiny Emperor Has No Clothes!” 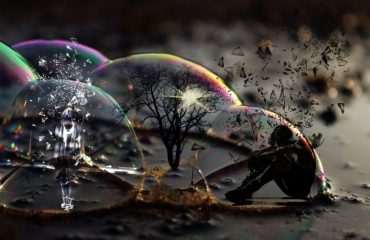 COVID-19 Pt. 5: Psychologists, Scientists and The CIA Tell Us Fear is The Real Killer