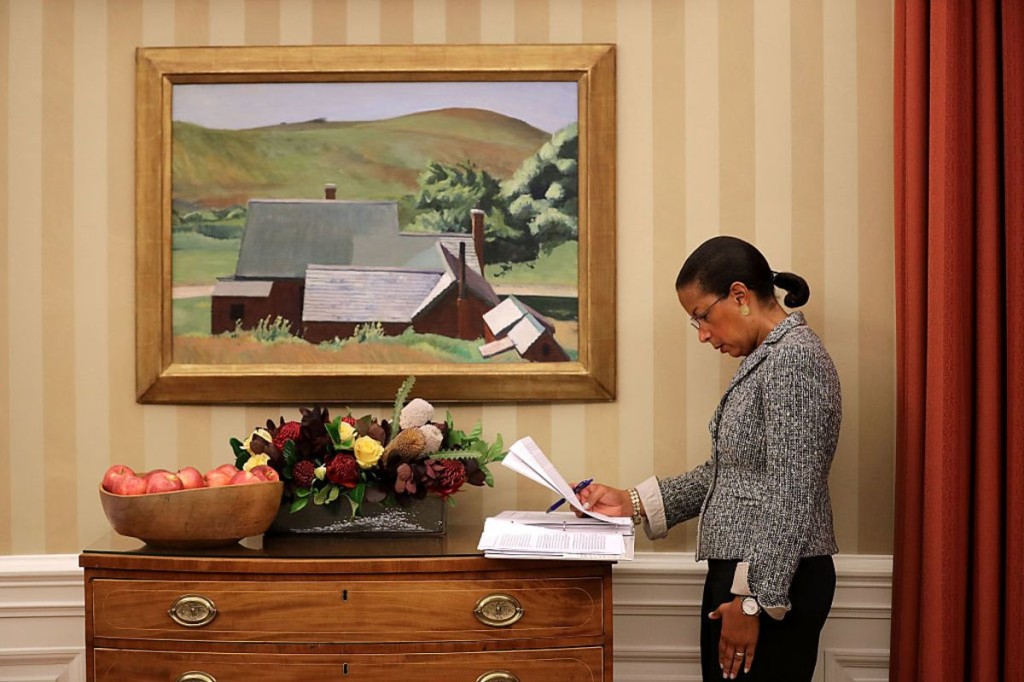 White House lawyers last month learned that the former national security adviser Susan Rice requested the identities of U.S. persons in raw intelligence reports on dozens of occasions that connect to the Donald Trump transition and campaign, according to U.S. officials familiar with the matter.

The pattern of Rice’s requests was discovered in a National Security Council review of the government’s policy on “unmasking” the identities of individuals in the U.S. who are not targets of electronic eavesdropping, but whose communications are collected incidentally. Normally those names are redacted from summaries of monitored conversations and appear in reports as something like “U.S. Person One.”

The National Security Council’s senior director for intelligence, Ezra Cohen-Watnick, was conducting the review, according to two U.S. officials who spoke with Bloomberg View on the condition of anonymity because they were not authorized to discuss it publicly. In February Cohen-Watnick discovered Rice’s multiple requests to unmask U.S. persons in intelligence reports that related to Trump transition activities. He brought this to the attention of the White House General Counsel’s office, who reviewed more of Rice’s requests and instructed him to end his own research into the unmasking policy.

The intelligence reports were summaries of monitored conversations — primarily between foreign officials discussing the Trump transition, but also in some cases direct contact between members of the Trump team and monitored foreign officials. One U.S. official familiar with the reports said they contained valuable political information on the Trump transition such as whom the Trump team was meeting, the views of Trump associates on foreign policy matters and plans for the incoming administration.

Rice did not respond to an email seeking comment on Monday morning. Her role in requesting the identities of Trump transition officials adds an important element to the dueling investigations surrounding the Trump White House since the president’s inauguration.

Both the House and Senate intelligence committees are probing any ties between Trump associates and a Russian influence operation against Hillary Clinton during the election. The chairman of the House intelligence committee, Representative Devin Nunes, is also investigating how the Obama White House kept tabs on the Trump transition after the election through unmasking the names of Trump associates incidentally collected in government eavesdropping of foreign officials.

Rice herself has not spoken directly on the issue of unmasking. Last month when she was asked on the “PBS NewsHour” about reports that Trump transition officials, including Trump himself, were swept up in incidental intelligence collection, Rice said: “I know nothing about this,” adding, “I was surprised to see reports from Chairman Nunes on that account today.”

Rice’s requests to unmask the names of Trump transition officials do not vindicate Trump’s own tweets from March 4 in which he accused Obama of illegally tapping Trump Tower. There remains no evidence to support that claim.

But Rice’s multiple requests to learn the identities of Trump officials discussed in intelligence reports during the transition period does highlight a longstanding concern for civil liberties advocates about U.S. surveillance programs. The standard for senior officials to learn the names of U.S. persons incidentally collected is that it must have some foreign intelligence value, a standard that can apply to almost anything. This suggests Rice’s unmasking requests were likely within the law.

The news about Rice also sheds light on the strange behavior of Nunes in the last two weeks. It emerged last week that he traveled to the White House last month, the night before he made an explosive allegation about Trump transition officials caught up in incidental surveillance. At the time he said he needed to go to the White House because the reports were only on a database for the executive branch. It now appears that he needed to view computer systems within the National Security Council that would include the logs of Rice’s requests to unmask U.S. persons.

The ranking Democrat on the committee Nunes chairs, Representative Adam Schiff, viewed these reports on Friday. In comments to the press over the weekend he declined to discuss the contents of these reports, but also said it was highly unusual for the reports to be shown only to Nunes and not himself and other members of the committee.

Indeed, much about this is highly unusual: if not how the surveillance was collected, then certainly how and why it was disseminated.

This column does not necessarily reflect the opinion of the editorial board or Bloomberg LP and its owners.

To contact the author of this story:
Eli Lake at elake1@bloomberg.net

To contact the editor responsible for this story:
Philip Gray at philipgray@bloomberg.net