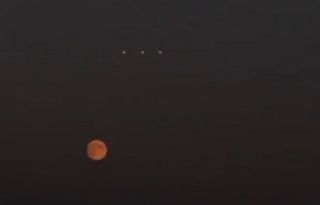 glowing balls can be seen floating from left to right

published on The Huffington Post UK, By Eve Hartley, on August 24, 2015

Three strange lights have been spotted over a rural area of Le Planestel, France in a recent UFO sighting caught on camera. Mystery surrounds the observation of the small spherical glowing orbs, and the film-maker remains unidentified.

As the camera positions itself at the nights sky the glowing balls can be seen floating from left to right.

The footage then focuses on the hovering balls of light, tracking them and zooming in as they move across the screen.

However, although the sighting seems extra-terrestrial, the term UFO simply qualifies an object that we can’t identify and the glowing dots could simply be a plane.

Another explanation for these sightings that does not rely on the existence of little green men, could simply be cloud formations.

Lenticular clouds are often mistaken for being UFOs and are usually created by gravity waves.