THREE Massive Tidal Waves Are Coming And It’s Not What You Think! 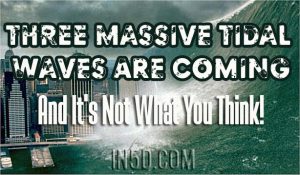 THREE Massive Tidal Waves Are Coming And It’s Not What You Think!

I recently had a dream where I saw three tidal waves. For most people, dreaming about a tidal wave can be very traumatic but in this dream, I saw it quite differently!

In my dream, I was at the beach and I saw this huge tidal wave coming my way. I turned around to seek shelter in a beach house when I noticed another tidal wave 10x bigger than the first one coming up over a mountain in the opposite direction. I went into the beach house as the waves converged over me. At no point in this dream was I ever scared or frightened. While the waves converged above me in this beach house, I could stick my hand through the window and touch the water.

Eventually, the waves resided, so I went outside only to see another tidal wave coming over the mountain, so I go back inside the beach house until it resided again.

As I got out of the beach house, I remembered that my truck was parked up on the mountain, so I went up there to find it. Once I got to the top of the mountain, there were a number of people milling around, but the energy there had changed to something quite peaceful and relaxing. The energy felt completely new as well. At this point, I woke up.

In typical dream analysis, a tidal wave may mean that there is something very overwhelming going on in your life but because there was no trauma or feelings of fear, I looked at this dream from a metaphysical standpoint.

Water is a mutable energy. It can be solid, liquid, or gas. If you think of a tidal “wave”, the wave can be viewed as a wave of energy This is what I feel the dream is portraying to me.

There is a huge wave of energy arriving that all of us will be focused on. In the meanwhile, another wave of energy will be coming from the opposite direction and will converge with the initial energy wave. At that point, something magical will happen! Whether that’s moving into the next stage of spirituality, becoming a lightbody, or something else is unknown, but it will be MAGICAL!

The initial wave may be something similar to what Paul LaViolette calls the Galactic Superwave or it might be one of the cosmic wildcards that I mention in the In5D article, Beyond Imagination! The Cosmic Wildcard.

In dream analysis, a house or a car is you, even if you are in that house or car. When these waves came, I “went within” the beach house or in simpler terms, I went within myself when the wave of energy arrived.

I often get visions before I fall asleep. A few months ago, I had a vision where I saw a person standing in front of me. It could have been myself or someone else. In an instant, a huge flash of light engulfs the planet and all you can feel is unconditional love for everyone and everything. AT that point in time, NOTHING else matters. If you have any fears, worries, or issues, they’re GONE!

I get the feeling that the tidal wave dream and this vision are related to one another. Perhaps at the point of convergence, the white light will engulf the planet?

I wish I had a time frame for this but it all feels like this will happen in this current lifetime. The sooner, the better!

Have you had dreams of tidal waves? If so, please tell us about them below!

Sending you all infinite Love & Light,

1 Comment to “ THREE Massive Tidal Waves Are Coming And It’s Not What You Think!”