This Is How The Incoming TIDAL WAVES Of ENERGY Will Transform You!

This Is How The Incoming TIDAL WAVES Of ENERGY Will Transform You! 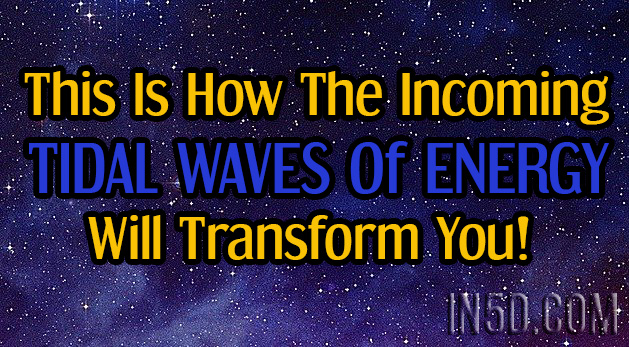 There is a LOT of talk about the recent waves of energy that have covered the planet. We have even received visual proof of the initial wave as captured by satellite imagery.

There is also a lot of speculation as to what these waves mean and what they do for humanity.

In May of 2016, I released an article and video entitled, “THREE Massive Tidal Waves Are Coming And It’s Not What You Think!“. In this video and article, I explained how I saw three massive tidal waves coming, yet there was no fear.

The following is an excerpt from that article:

Water is a mutable energy. It can be solid, liquid, or gas. If you think of a tidal “wave”, the wave can be viewed as a wave of energy This is what I feel the dream is portraying to me.

There is a huge wave of energy arriving that all of us will be focused on. In the meanwhile, another wave of energy will be coming from the opposite direction and will converge with the initial energy wave. At that point, something magical will happen! Whether that’s moving into the next stage of spirituality, becoming a lightbody, or something else is unknown, but it will be MAGICAL!

So, here we are and the first two waves have passed. Now what?

As evidenced by the Mandela Effect, we are seeing timelines converge into the best possible outcome for humanity. I wrote an article called, ” The Mandela Effect – PROOF That Negative Timelines Are Collapsing!“.

The following is an excerpt from it:

Each time a timeline converges, it creates a time anomaly that could include the sensation that time is speeding up, a glitch in time, or something along the lines of the Mandela Effect.

When millions of people experience this as we’ve witnesses throughout the past year, then you know that something amazing is coming to fruition.

Be very cognizant of where you are placing your thoughts and intentions because each thought and intention is affecting the timeline and the highest probable outcome every millisecond!

Just about everyone in this field is cognizant that we are on the precipice of something magical! You can sense it in the air. You can see it in our eyes.

We only have 20 of the 64 codons in our DNA turned on. If these waves of energy have the ability to affect our DNA, then RIGHT NOW is the time to turn on the remaining codons!

But there’s a catch…

What if everyone’s codons and DNA were fully activated? How would those who are not working in humanity’s best interests use these abilities?

This is the safeguard that allows each codon to be turned on. You MUST be service to others or working in humanity’s best interests in order for these codons to become activated.

For example, if someone wanted to use these abilities for their own personal advantage over humanity, the emotion of GREED would not allow this ability to be used because greed is a lower level vibration.
The KEY is to use your new abilities in the highest of vibrations and in the best interests of humanity.

What can I do right NOW?

Once again, the answer is quite simple.

I would also highly recommend setting your intentions in as many ways as possible.

In the following video, I’ll show you what I’m doing to open up all of the codons in my DNA (at the 18:30 marker of the video):

Your thoughts and intentions play a HUGE role in the unlocking of the codons in your DNA.

As mentioned in my 3 Tidal Wave video, there is a third and final wave that has yet to arrive. I believe that this final wave will be the one that is commonly known as ascension. This can be viewed as raising your vibration enough to transcend this 3rd dimensional reality.

I still don’t have a date when this final wave will occur but to me, it doesn’t matter. All that matters is the NOW and right NOW, we should ALL be working on raising our own vibrations and helping others while making this planet a place where we all want to be.

About the Author:
Gregg Prescott, M.S. is the founder and editor of In5D and BodyMindSoulSpirit. He hosts a weekly spiritual show on In5D Radio and promotes spiritual, metaphysical and esoteric conferences in the United States through In5dEvents. His love and faith for humanity motivates him to work relentlessly in humanity’s best interests 12-15+ hours a day, 365 days a year. Please like and follow In5D on Facebook as well as BodyMindSoulSpirit on Facebook!