There are often layers underneath

There are often layers underneath

by Ollie Troll, published on i-uvsweden, on February 3, 2019

Remember the uprising in Ukraine and the coup d’tat were some of the US political establishment handed out cookies and money in support of it? The EU and everyone else jumped on the bandwagon and supported it.

There were hired mercenaries shooting at both police forces and civilians to spread confusion and panic. How are things going with Ukraine today? The nazis in power with help of affiliates are effectively destroying the country from within.

Today we see something similar but in Venezuela. One of the differences is that Venezuela has one of the largest oil reserves in the world. Ukraine is located on Russia’s doorstep meaning both are of interest for the deep state. The deep state is not the same as the US although it might seem that way. You can say that the US military was the brute force of the deep state in the past however this has changed.

Italy refuses to recognize Guaido (the self proclaimed president) but EU keeps on pointing fingers at Venezuela… which is a true moral disgrace!

And why does Trump seem to tag along by endorsing Guaido?

WAIT he has been doing things like this before!! First we had the spat with Kim Jong-Un about who had the largest trigger button aka nuclear bombs?? There was a missile alert in Hawaii at the time if you remember. The narrative was spun that it was a Hawaiian worker who hit the alert by accident. The missile threat was real though and it was launched from a deep state rouge submarine asset and the attack was to be blamed on North Korea followed by another war… instead we got peace talks.. what a turn around. Patriots in control?

This is how the deep state works!!! What was the pretext of the Iraq and Afghanistan war? 9/11, WMD’s and terrorists but the plane hijackers were from Saudi Arabia?

Next was one of the gas attacks in Syria which were followed by Trump bombing Syria. There was about 59 Tomahawk missiles launched but what did they ACTUALLY hit? Maybe they did hit some DAESH (ISIS) resources instead?

enezuela? Let’s check out some of his recent tweets! 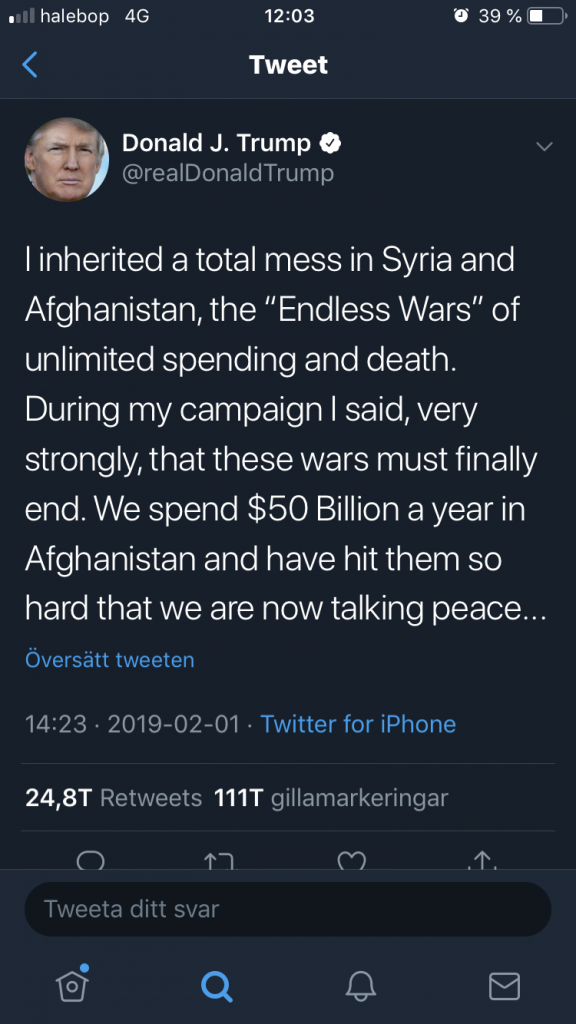 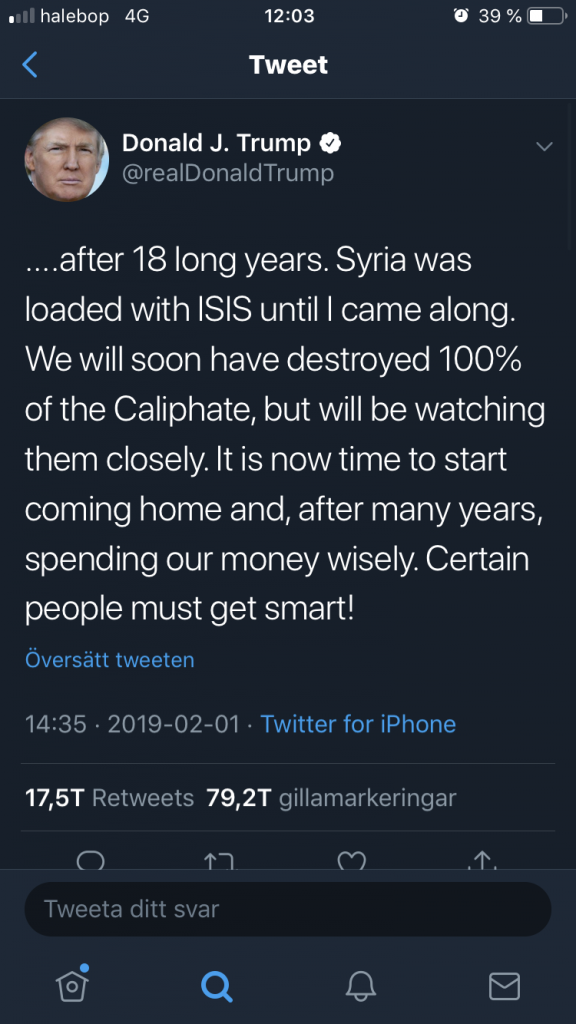 He is pulling out of Syria and Afghanistan has I have written several times. Why is that and why are so many democrats opposing this move along with the barrier wall issue? Who is profiting from drugs and human trafficking the most?

The petro-dollar is failing as is the global current monetary debt slavery system. Trump has to manipulate the economic statistics numbers in order to not make the failing economy a elections issue and in order to re-launch a new gold/asset backed monetary system.The deep state would love to pin down Trump on anything they can get their hands on such has a economic disaster.

He can’t fix everything at once you have to have this and the larger picture in mind. In order to expose the deep state you need to hold all the cards necessary to bring the house of cards DOWN. Think of the might of this task!!!

It truly feels like we are watching an old entity die.. here in Sweden they are about to remove cash entirely and only have digital money!!! Russia, China, India, Turkey and others have been buying up GOLD for years. Why?? They know something is afoot. And why are precious metals so undervalued today? This is off course due to market riggings!!

Q told us the 13th of December in post number 2619 that “Gold shall destroy FED”!

In 2013 there was much fuzz in the alternative media about Germany wanting it’s gold back from FED NEW YORK. Initially they did not get it back and the credebilty of the FED was in questions but it seems like they succeeded in bringing it back 2017!

While we are still at it concerning gold Venezuela wanted to repatriate 14 tons of gold from Bank of England in November last year. Guess what Bank of England refuses to comply and caves from outside pressure not to release the gold. So while it seems like the US is after the oil reserves in Venezuela there is something else going on.

So while these political charades are moving along things as to be brought into place in order to “break the deep state Bank” and no it’s not done in an blink of an eye. If you knew how many multiple fronts this war is fought on you would be amazed. Trump & Co are constantly fighting fake news, big pharma, big banking, human trafficking, drug runners, essentially the deep state…

… have you ever wondered how the heck POTUS is putting up with everything he is facing? In a tweet an anon asks exactly that question and I think somebody in the know answers.. (I have a hard time believing POTUS has the time to answer questions like these but maybe someone of the patriots has). You have to admit that it has to take a lot of courage and stamina to put up with so much smear as the POTUS thus. What I’m getting is that he knows stuff that helps him putting up with all the crap he gets left right and center. 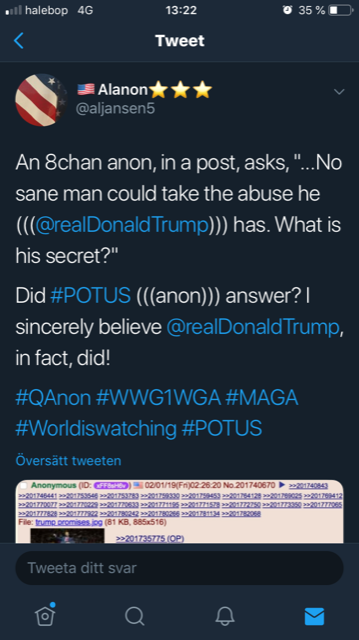 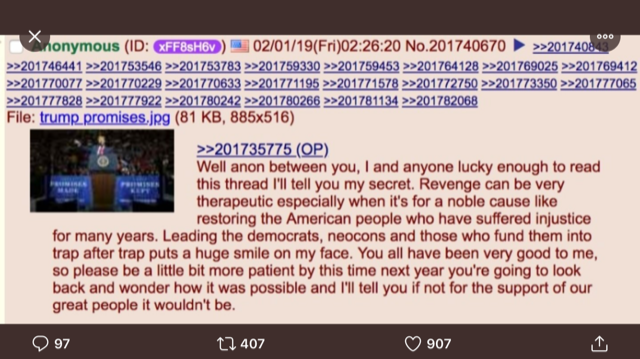 Who did benefit from Hillary having private servers? Who did Hillary sell state secrets to? Is Nancy Pelosi affiliated with a huge asian country? If so which one?

What was Nancy’s latest thwarted trip over seas about? Why did they disclose her destinations? SerialBrain2 is a master of decoding events happening connected to Q Team and POTUS & Co he has made a brilliant picture overview of the latest events surrounding the wall, SOTUS and the latest drug busts. Remember we are at war and this is serious business! See picture below! 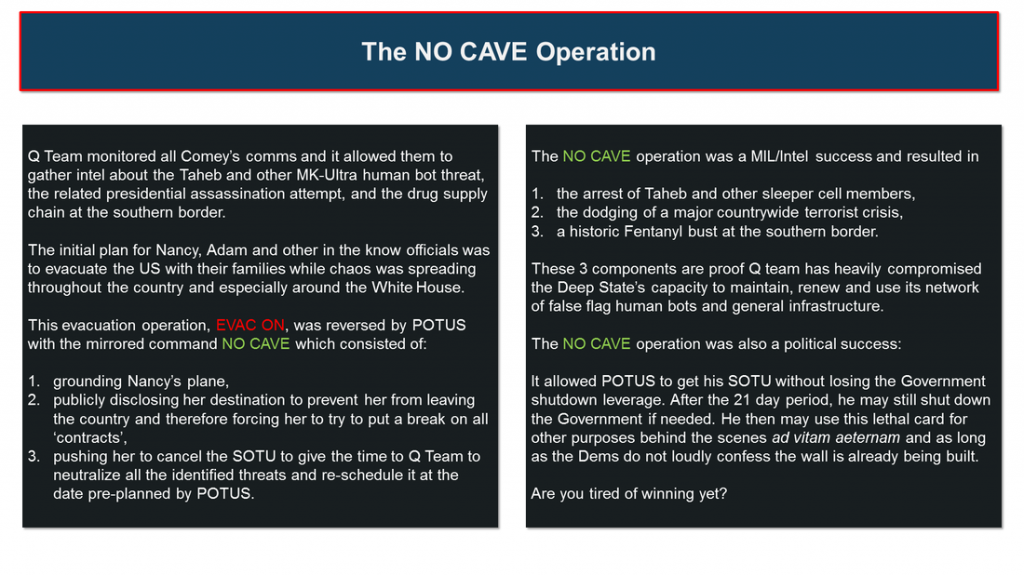 While the surface on the planet seems to more and more engulfed in craziness keep up your good faith and knowledge that we never will succumb to FEAR. Shining the light on information not known to many is one of our tasks here.

Yes, I would want this to end now but apparently things have to play out their course. Do the best you can with what you have with as much joy and happiness you can muster. I would highly suggest that you buy some extra food and some precious metals just in case things go south.