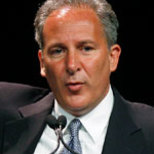 Peter Schiff is one of the few non-biased investment advisors to have correctly called the current bear market before it began.

The more the US antagonizes the world with spying or huge fines on foreign banks, the quicker the process of abandoning the dollar as a reserve currency will be unraveled, Peter Schiff, the president of investment house Euro Pacific Capital, told RT.

RT:This is just the latest in a series of scandals linked to America’s spying on Germany. Why does Berlin not react more strongly?

Peter Schiff: I do not know. America is doing a lot to p*** off its friends – not only spying on them. Believe me, many Americans do not like it any more than the Germans. But we are also fining major European banks in Switzerland, in France and in the UK for violating US law. The Germans maybe should be even more concerned with what happened to their gold than about the spying.

RT: Why are European countries so economically dependent on the States?

RT: If Germany did decide to do something about America’s spying activities, what could it actually achieve?

PS: I do not know, but certainly what emboldens the US to act in this way is this feeling of invincibility or superiority, and it is going to be very humbling when the truth comes out, when America is going to be forced to face what has happened to this country. We have been living beyond our means, we have been living based on our fantasy, not based on reality and the world is certainly helping to preserve that fantasy by accumulating US dollars, by continuing to loan us more money. If the world was not loaning us so much money, we wouldn’t be able to afford to spy on anybody, even on American citizens. Speaking as an American citizen, that would be an improvement.

RT: Germany is a friend of the US, so should it even be worried about being spied on?

PS: Look, Americans are afraid that they are being spied on, too. Nobody wants people spying on them. The government claims that this is all to keep us safe, this is all to protect us from terrorists, but I do not trust government and if the Germans do not trust our government, then I don’t trust them either. You always have an abuse of power, so you want to limit government power, and I think what the US government is doing with respect to the American citizens is not only immoral but unconstitutional. And again, welcome to the club. If the Germans were upset about “our government spying on us,” they probably have a right to be. But at least if they are spying on the Germans, maybe they can make an argument that might be more related to potential terrorist threats than spying on Americans.

The statements, views and opinions expressed in this column are solely those of the author and do not necessarily represent those of RT.