The water in Saturn’s rings and satellites is like that on Earth except for moon Phoebe, which is out of this world

The water in Saturn’s rings and satellites is like that on Earth except for moon Phoebe, which is out of this world 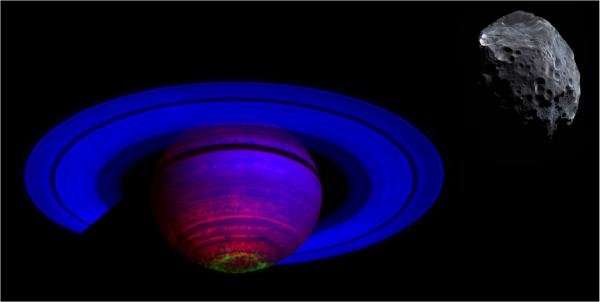 By developing a new method for measuring isotopic ratios of water and carbon dioxide remotely, scientists have found that the water in Saturn’s rings and satellites is unexpectedly like water on the Earth, except on Saturn’s moon Phoebe, where the water is more unusual than on any other object so far studied in the Solar System.

The results, found in the Icarus paper “Isotopic Ratios of Saturn’s Rings and Satellites: Implications for the Origin of Water and Phoebe” by Planetary Science Institute Senior Scientist Roger N. Clark, also mean we need to change models of the formation of the Solar System because the new results are in conflict with existing models. Robert H. Brown (U. Arizona), Dale P. Cruikshank (NASA), and Gregg A. Swayze (USGS) are co-authors.

Isotopes are different forms of elements but with differing numbers of neutrons. Adding a neutron adds mass to the element, and that can change processes of how a planet, comet, or moon is formed. Water is composed of two hydrogen (H) atoms and one oxygen atom, H2O. Adding a neutron to one hydrogen atom, then called deuterium (D), increases the mass of a water molecule (HDO) by about 5 percent, and that small change results in isotopic differences in the formation of a planet, moon, or comet, and changes the evaporation of water after formation. The deuterium to hydrogen ratio (D/H) is a fingerprint of the formation conditions, including temperature and evolution over time. Evaporating water enriches deuterium in the remaining surface.

Models for the formation of the Solar System indicate that the D/H should be much higher in the colder outer Solar System than in the hotter inner system where the Earth formed. Deuterium is more abundant in cold molecular clouds. Some models predict the D/H should be 10 times higher for the Saturn system than on Earth. But the new measurements show this is not the case for Saturn’s rings and satellites except Saturn’s moon Phoebe.

The discovery of an unusual deuterium to hydrogen isotopic ratio (D/H) for Saturn’s moon Phoebe means it was formed in and comes from a far part of the Solar System, Clark said. “Phoebe’s D/H ratio is the highest value yet measured in the Solar System, implying an origin in the cold outer Solar System far beyond Saturn.”

The team also measured the carbon-13 to carbon-12 (13C/12C) ratio on Saturn’s moon Iapetus and Phoebe. Iapetus, which also has D/H similar to Earth, also has 13C/12C close to Earth’s values, but Phoebe is almost five times higher in the carbon isotope. The carbon dioxide presence places limits on how much of Phoebe could have evaporated to space after formation, leaving the only possibility that Phoebe formed in the very cold outer reaches of the Solar System, much further out than Saturn, and was subsequently perturbed into an orbit where it was captured by Saturn. Exactly how far out Phoebe originated is unknown. There are currently no measurements of D/H or 13C/12C for the icy surfaces on Pluto or Kuiper Belt objects beyond Pluto, but this new methodology will enable us to make such measurements of the surface ices.

The measurements were made from the NASA Cassini spacecraft using the Visual and Infrared Mapping Spectrometer (VIMS) over the course of the mission. An improved calibration of the instrument, completed early in 2018, enabled the precision needed for these measurements of reflected light from the rings and satellites. The new method of measuring isotopic ratios on solids like water ice and carbon dioxide ice using reflectance spectroscopy remotely will enable measurements of isotopic ratios for other objects throughout the Solar System, putting further constraints on models of Solar System formation.

The Saturn system D/H values close to the Earth’s values imply a similar water source for the inner and outer Solar System, and new models need to be developed where the change from inner to outer Solar System is less.

The NASA Europa Clipper mission could be used to measure isotopic ratios on the icy Galilean satellites around Jupiter, and Clark is a Co-Investigator on the mission and hopes to make such measurements.