The War On Cash Goes Nuclear In India, Australia and Across The World

The War On Cash Goes Nuclear In India, Australia and Across The World 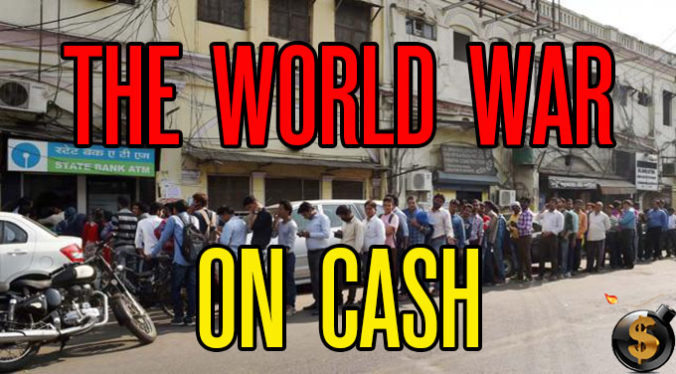 We are living in a world where paper fiat money is becoming a novelty.

In Australia, Citibank has just become the first to declare that it no longer will accept notes or coins. Only digital transactions. This follows on the heels of India banning large cash denominations.

The cash-oriented changes of these two countries are especially troubling in light of the eventual plans to phase out large denomination euro notes and the US 100 dollar bill by 2018.  Just as the Economist predicted nearly 30 years ago, the world is going cashless.

A few days ago we wrote (here) about how the Reserve Bank of India eliminated 500 and 1000 rupee banknotes from the money supply. These notes represent 20% of the cash value in circulation and 80% of cash outstanding in the country.

The main reason India has been combating cash in conjunction with selling off gold, is because people in the “black” or “free” Indian marketplace were supposedly circumventing the financial system by conducting business and then slowly buying physical gold with large denomination bills.

Since the transactions were not being tracked or monitored, it was much easier to hide earnings from the government trying to extort them. So naturally, being a greedy crime syndicate that operates parasitically on extorted funds, the government is putting a stop to something that it views as an ongoing, expanding threat.

Of course, there’s a reason why Indian women wear their wealth – gold and silver – on their bodies. Indians have been through this before. Indian societies are very old, perhaps the oldest in the world, and they’ve gone through numerous metals confiscations in the past.

Of course, what’s going on is not being described as a “confiscation.” So far, reasons to remove cash are not coordinated. In India, it’s because of “corruption.” In Australia, it’s supposedly because customers simply don’t want or need cash.

Citibank’s Australian head of retail banking Janine Copelin stated, “We have seen a steady decline in the demand for cash services in our branches — in fact less than 4% of Citi customers have used this service in the last 12 months.”

Which is both believable and possible considering most people don’t understand the significant benefits of paying with cash or don’t care that the government and banks are able to track their every move and transaction. Then again, Citi could simply be exaggerating.

It’s the same mentality that people inside the US had and continue to have after they learned that the NSA was tracking all their information after Edward Snowden’s revelations.

A lot of people responded by saying that they have nothing to hide and therefore nothing to worry about. “Let the government track me all they want, we have to stop the criminals and terrorists”.

The criminals and terrorists ARE the government, dummies. But, that’s what government indoctrination camps (schools) are for.

So starting November 24th, Aussies who bank with Citi, will be forced to use ATMs to withdraw their money – which besides being more inconvenient for customers, will likely also cause them to have to spend much more money on ATM fees.

Perhaps the Aussies liked what they saw in India, though that seems hard to understand. The Indian economy is heavily reliant on revenue from tourism starting in November. The recent attack on cash is squelching the industry by turning away foreigners who are having trouble exchanging their money for the local currency the minute they land in the airport.

According to UBS Group AG:  “Australia should follow India’s lead and scrap its biggest bank notes.”

“Removing large denomination notes in Australia would be good for the economy and good for the banks. Benefits would include reduced crime and welfare fraud, increased tax revenue and a ‘spike’ in bank deposits.”

Increased tax revenue, by the way, is only a “benefit” to the government, not anyone else.

This is all part of an increasing trend to move toward a society entirely bereft of cash. It is ongoing in Sweden, as well, where you cannot pay for bus fare with cash. Not to mention that of Sweden’s 1,600 bank branches, about 900 no longer keep cash on hand or accept cash deposits.

In Uruguay, residents can no longer buy gas with cash in the evening. Eventually, Uruguay plans to forbid employers from paying workers in cash. Everyone working in Uruguay will have to receive funds in bank accounts. No doubt this will be replicated elsewhere if it comes to pass.

Meanwhile, according to “experts” Sweden will be entirely cashless in less than five years. And the Swedes appear to be progressing quickly toward that stated goal with circulation of their Swedish krona having fallen from around 106 billion in 2009 to around 80 billion this past year.

All these cashless initiatives are a part of a longstanding globalist banking plan to move toward a one-world currency. Though it will be said that cash is being gotten rid of to cut down on things like terrorism, tax evasion, and financial crime, the real reason is to consolidate power.

It is certainly likely, as well, that the “cashless” move has been advanced by negative interest rates. As people face such rates, they are likely to try to remove their cash from banks or convert it to gold and silver – rather than hold cash in banks while paying for the privilege.

And, yes, there are other “real” reasons as well. With cash increasingly becoming digitized, it makes it easier for the real criminals (government and central bankers) to exercise more totalitarian control in tracking transactions.

We won’t hear about these reasons in the mainstream media. Instead, we’ll be informed that people “aren’t interested” in cash or that cash is innately a mechanism of corruption.

Hopefully as this progresses, people will start to raise their voices in opposition. The idea that governments can track your every transaction and that you cannot hold cash in alternative forms of money such as gold and silver is extremely authoritarian.

“A chaotic situation is prevailing at the bank branches and this is unbearable for both customers as well as bank employees and officers,” said S Nagarajan, general secretary of AIBOA and his counterpart at AIBEA, in the letter to IBA, the apex body of bank managements.

Plus, apparently there have already been some 25 deaths due to Indian demonetization in just six days after the decision. In the Bulandshahr, branch of Kailash hospital, owned by union culture and tourism minister Mahesh Sharma, a child died because the parents had only old currency notes. The hospital wanted them to deposit a Rs 10,000 cash advance for admission. Of course, the hospital has denied the charge.

Then in Surat, Gujarat, a middle aged mother of two committed suicide because she wasn’t able to buy rations to feed her family. The shops she used, refused to accept the old currency notes.

Governments like to tell you that their actions are for “your own good,” but it never works out that way. If governments ever really gain total effective control over money and your use, expect to be even more deeply impoverished than you already are.

There are currently riots occurring in Greece upon O’Bomber’s arrival.  The Greek banking system has been nearly shuttered now for years.  Cyprus depositors found their funds confiscated over one weekend in 2013. Italian and German banks are on the brink of failure.  Indians are dying in the streets amidst mass chaos as the government has demonetized much of their currency.  And in places like Sweden and Australia they are quickly moving to get rid of cash as well.