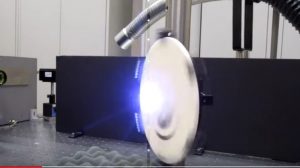 Within three years, the Pentagon’s non-lethal weapons lab hopes to have a direct energy weapon that can produce an effect like a haunted walkie-talkie or the biblical burning bush.

Watch the video above and listen carefully for what sounds like a human voice during the second spin. That’s not an audio recording or a broadcast transmitted over radio…it’s not human at all. It’s an auditory effect that’s created by military scientists who manipulated the air with lasers — and it’s the Pentagon’s most interesting idea for stopping people charging checkpoints, or just scaring the crap out of them.

The U.S. military’s Joint Non-Lethal Weapons Program, or JNLWD, is inching closer to a weapon that alters atoms to literally create words from thin air. It’s called the Laser-Induced Plasma Effect and, fingers crossed, they hope to be able to say intelligible words within the next three years.

The weapon is composed of two parts: first, a femtosecond laser, which shoots a burst of focused light for 10−15 seconds, just long enough to rip the electrons from air molecules and create a ball of plasma. (Sometimes called the fourth state of matter, plasma is a field of electrified gas, highly responsive to electromagnetic effects.) The scientists then hit that plasma field with a second nanolaser, tuned to an extremely narrow range of wavelengths. They use that to manipulate the plasma field in a way that can produce light and noise. Get the interaction precise enough and you get something that sounds like a haunted walkie-talkie.

“We’re this close to getting it to speak to us. I need three or four more kilohertz,” says David Law, who runs JNLWD’s technology division. Ultimately, he wants a single system that can produce multiple effects — noise, light, even heat — and replace a wide variety of non-lethal weapons that the military has been testing. We have the exclusive video.

The weapon’s most interesting aspect may be the way it creates noise: at a specific and distant point in space, rather than blasting it out of a nearby speaker. That means that soldiers between the weapon and the target are unaffected.

How far away can that point be? “Range is a function of the optics. The bigger the mirrors, the farther the range,” Law said. A five-inch mirror creates the effect about one kilometer away; an 8-inch mirror, about five kilometers, he said. “They’ve created plasmas at 20 or 30 kilometers,” he said. “This is the first non-lethal weapon that could go out tens of kilometers.”

The Kerr effect, a term that refers to minute changes in the refractive index as a result of electromagnetic field changes, makes it actually easier to create the effect at a distance.

“One of the things about the ultra short pulse, it wants to form at longer ranges. It’s harder to form at shorter ranges,” said Law.

Patrick Tucker is technology editor for Defense One. He’s also the author of The Naked Future: What Happens in a World That Anticipates Your Every Move? (Current, 2014). Previously, Tucker was deputy editor for The Futurist for nine years. Tucker has written about emerging technology in Slate, … Full bio