The US has imposed sanctions on four serving or retired Venezuelan generals for rights abuses or corruption.

US imposes more sanctions on Venezuelans

BZ: you are starting to see what has been going on “behind the scenes” flow out into the global “linear” consciousness. All softening the ground and stair stepping up the cognitive awareness of what each being knows in quantum that is occurring in the linear time line of the crumbling false construct. 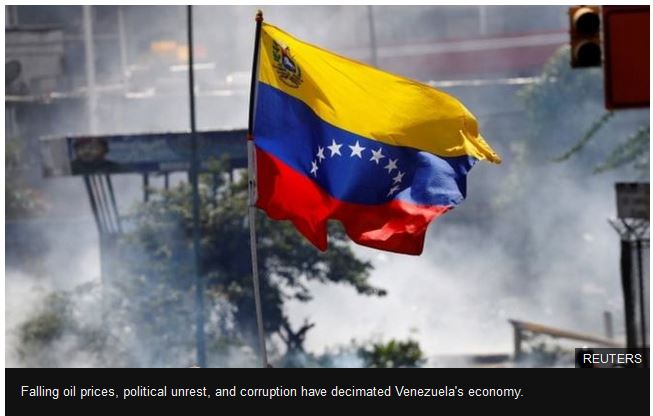 The US has imposed sanctions on four serving or retired Venezuelan generals for rights abuses or corruption.

The list includes Rodolfo Marco Torres, whom the US Treasury sanctioned for food smuggling when he was in charge of the country’s distribution network.

All the men have had their assets frozen and US businesses are forbidden from working with them.

Forty-four Venezuelan officials have been sanctioned to date including President Nicolas Maduro.

Venezuela has angrily dismissed the move with its Foreign Minister, Jorge Arreaza, saying the country would never submit to what he called the imperialist and war-mongering forces of the US government.

He said the army “will never bow to any foreign power, much less to the imperialist and warlike forces of Donald Trump’s supremacist government. We demand respect”.

US Treasury Secretary Steven Mnuchin justified the sanctions by saying that “President Maduro and his inner circle continue to put their own interests above those of the Venezuelan people”.

Two years ago President Maduro put the military in charge of food distribution after shortages led to food riots.

US press reports described military kickbacks to generals for food contracts and bribes to move food out of ports.

The opposition-led Congress pointed the finger at Gen Torres and publically censured him.

Separately, prosecutors in the US began investigating the allegations believing some of the bribes had passed through the US financial system.