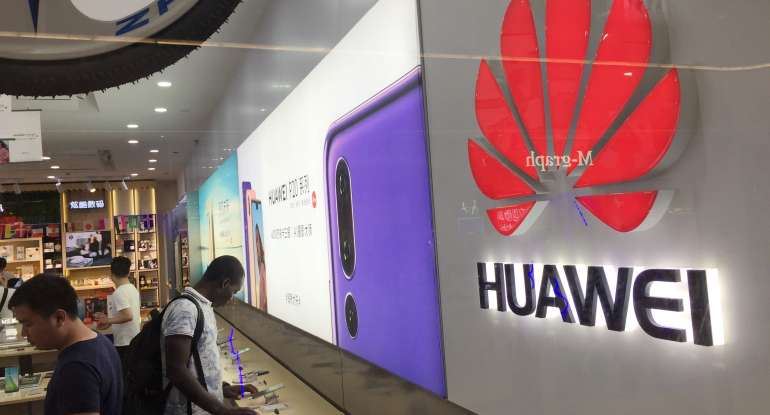 Customers shop at a Huawei store in Wuhan, China, on June 18, 2018. (Imaginechina via AP Images)

Although Johnson was in support of the Chinese tech giant laying the non-sensitive portions of 5G infrastructure, he said China’s lack of transparency about coronavirus made the communist-run country untrustworthy.

President Trump, Attorney General William Barr, Secretary of State Mike Pompeo and members of the so-called  “Five-Eyes” countries that share intelligence information, brought huge pressure on the Brits to dump Huawei. The U.S. pressed hard for the UK to dump Huawei because of widespread speculation that China would use the 5G infrastructure to spy and use the remote command structure for blackmail.

Senator Ted Cruz has said that if the UK used Huawei it would be next to impossible to share intelligence information with the ally.

Earlier this week, Huawei, detecting a change of heart by the Brits due to anger over the coronavirus, sent a threatening letter to Johnson. Huawei’s UK chief Victor Zhang told British leaders that pulling up stakes now would leave Britain in the “digital slow lane.”

“There are those who choose to continue to attack us without presenting any evidence. Disrupting our involvement in the 5G rollout would do Britain a disservice.”

The company is believed to be directly answerable to, if not an implicit part of, the Chinese government.

The U.S. Department of Justice has begun a China Initiative to keep the communist behemoth from exercising its 5G advantage.

In a speech in February that is well worth watching and reading (see below), Attorney General William Barr said fighting for technological supremacy is about national security and Western everyday life. Here are just some of the stakes Barr, a former telecom company executive and Chinese studies graduate student, mentioned in his speech.

5G technology lies at the center of the technological and industrial world that is taking shape.  In essence, communications networks are not just for communications anymore. They are evolving into the central nervous system of the next generation of internet, called the “Industrial Internet,” and the next generation of industrial systems that will depend on that infrastructure.

Much of the discussion on the dangers of allowing China to establish dominance in 5G has been focused on the immediate security concern of using communications networks that China can monitor and surveil.  That is, in fact, a monumental danger.  For that reason alone, we should mobilize to surmount China’s drive to dominate 5G. But the stakes are far higher than this.

From a national security standpoint, if the Industrial Internet becomes dependent on Chinese technology, China would have the ability to shut countries off from technology and equipment upon which their consumers and industry depend.  The power the United States has today to use economic sanctions would pale by comparison to the unprecedented economic leverage we would be surrendering into the hands of China.

…Some Americans think that all we are talking about here is analogous to the shift from 3G to 4G in our wireless networks.

The jump to 5G is a quantum leap beyond this.  We are now talking about multi-Gigabits per second peak rates for both download and upload.

Devices of all kinds – some “smart,” some sensors collecting and transmitting data, and some actuators carrying out remote commands – can be dispersed and embedded in business and industrial equipment across a wide array of businesses, such as transportation, energy, finance, healthcare, agriculture, heavy construction, and so forth.  5G provides the command-and-control function for managing industrial processes.

As the world of 5G unfolds, we will be seeing not just smart homes, but smart farms, smart factories, smart heavy construction, smart transportation systems, and so forth.  And a host of new emerging technologies, in addition to AI, will become interwoven with and dependent upon 5G and the Industrial Internet, including for example: robotics, the Internet of Things, autonomous vehicles, 3-D printing, nanotechnology, biotechnology, materials science, energy storage, and quantum computing.

The Tory Conservative party began a serious effort to claw back the contract from Huawei after seeing the communist nation’s response to the coronavirus pandemic, its failure to report about the rampant virus, attempts to corner the market on protective hospital clothing, and realizing that key medications needed for survival were sourced and made in China.

Bloomberg talked with Tory members who were fighting Johnson on Huawei:

“We need to devise a proper, realistic exit strategy from relying on Huawei,” Conservative Member of Parliament Damian Green told Bloomberg News. “Our telecom providers… need to know the government is determined to drive down Huawei’s involvement to zero percent over a realistic timescale.”

“The mood in the parliamentary party has hardened,” said Tom Tugendhat, the Conservative Party’s chairman of the House of Commons Foreign Affairs Committee.

“It’s a shared realization of what it means for dependence on a business that is part of a state that does not share our values,” Tugendhat said.

Besides unleashing the coronavirus on the world, the Chinese are responsible for the theft of U.S. military technology and of hacking into the database of the Office of Personnel Management – retrieving the 21 million real identities and personal details of American spies as well as workaday government employees — and broke into the database of Equifax.

The tech giant is banned from the United States.