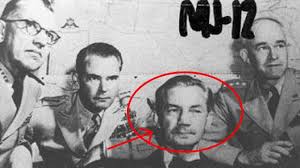 Secretary of defense James Forrestal began to object to the secrecy. He was a very idealistic and religious man who believed that the public should be told. When he began to talk to leaders of the opposition party and leaders of congress about the alien problem he was asked to resign by Truman. He expressed his fears to many people and rightfully believed that he was being watched. This was interpreted by those who were ignorant of the facts as paranoia. Forrestal later was said to have suffered a mental breakdown and was admitted to Bethesda Naval Hospital. In fact it was feared that Forrestal would begin to talk again and he had to be isolated and discredited. Sometime in the early morning of May 22, 1949 he became one of the first victims of the cover-up. ,,