The Starseed Initiation (August 21st Total Eclipse of the Sun) 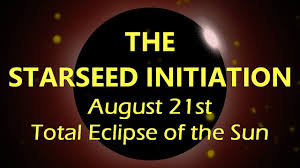 The Starseed Initiation (August 21st Total Eclipse of the Sun)

At this time upon your planet, that which we have called ‘The Emerald Gateway’ it is in actual fact a collective initiation. It is most significant for you to realise this. It is an anointing on a grand scale. We call this the Starseed Initiation. Channelled, written and narrated by Magenta Pixie. Video compiled by Catzmagick using royalty free media.