The Speech of the Unknown 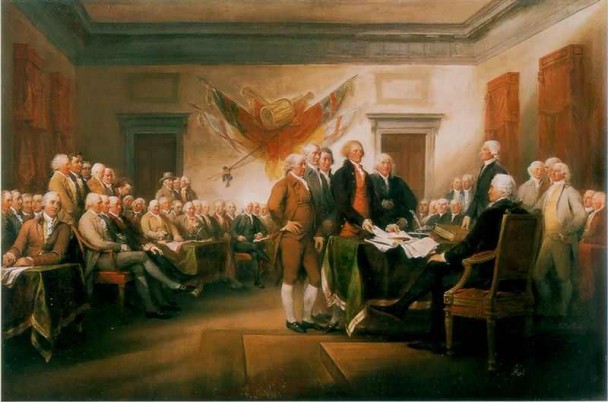 Signing the Declaration of Independence

The Speech of the Unknown

From the Editor of Reverse Spins: The following is taken from Washington and His Generals: or, Legends of the Revolution by George Lippard, published in 1847. The signers of the Declaration of Independence sat in Independence Hall at Philadelphia, contemplating losing their heads or being hanged. Their courage wavered. The document sat there unsigned. An extraordinary catalyst was needed to move them to action. An unknown man rose and gave an electrifying speech. He disappeared soon after.

By signing the Declaration, all were guilty of high treason under British law. The penalty for high treason was to be hanged by the neck until unconscious, then cut down and revived, then disemboweled and cut into quarters. The head and quarters were at the disposal of the crown.

No wonder they wavered! No wonder they discussed back and forth for days on end before signing the document that carried so grave a penalty. An old legend dramatizes the story of the one who galvanized the delegates and gave them the courage to sign that document.

But still there is doubt–and that pale-faced man, shrinking in one corner, squeaks out something about axes, scaffolds, and a–gibbet!

“Gibbet!” echoes a fierce, bold voice, that startles men from their seats–and look yonder! A tall slender man rises, dressed–although it is summer time–in a dark robe. Look how his white hand undulates as it is stretched slowly out, how that dark eye burns, while his words ring through the hall. (We do not know his name, let us therefore call his appeal)

THE SPEECH OF THE UNKNOWN.

“Gibbet? They may stretch our necks on all the gibbets in the land–they may turn every rock into a scaffold–every tree into a gallows, every home into a grave, and yet the words on that Parchment can never die!

“They may pour our blood on a thousand scaffolds, and yet from every drop that dyes the axe, or drips on the sawdust of the block, a new martyr to Freedom will spring into birth!

“The British King may blot out the Stars of God from His sky, but he cannot blot out His words written on the Parchment there! The works of God may perish–His Word, never!

“These words will go forth to the world when our bones are dust. To the slave in the mines they will speak–hope–to the mechanic in his workshop–freedom–to the coward-kings these words will speak, but not in tones of flattery. No, no! They will speak like the flaming syllables on Belshazzar’s wall–

THE DAYS OF YOUR PRIDE AND GLORY ARE NUMBERED!

THE DAYS OF JUDGMENT AND REVOLUTION DRAW NEAR!

“Yes, that Parchment will speak to the Kings in a language sad and terrible as the trump of the Archangel. You have trampled on mankind long enough. At last the voice of human woe has pierced the ear of God, and called His Judgment down! You have waded on to thrones over seas of blood–you have trampled on to power over the necks of millions–you have turned the poor man’s sweat and blood into robes for your delicate forms, into crowns for your anointed brows. Now Kings–now purpled Hangmen of the world–for you come the days of axes and gibbets and scaffolds–for you the wrath of man–for you the lightnings of God!–

“Look! How the light of your palaces on fire flashes up into the midnight sky!

“Now Purpled Hangmen of the world–turn and beg for mercy!

“Where will you find it?

“Not from God, for you have blasphemed His laws!

“Not from the People, for you stand baptized in their blood!

“There–and a scaffold looks you in the face.

“All around you–death–and nowhere pity!

“Now executioners of the human race, kneel down, yes, kneel down upon the sawdust of the scaffold–lay your perfumed heads upon the block–bless the axe as it falls–the axe that you sharpened for the poor man’s neck!

“Such is the message of that Declaration to Man, to the Kings of the world! And shall we falter now? And shall we start back appalled when our feet press the very threshold of Freedom? Do I see quailing faces around me, when our wives have been butchered–when the hearthstones of our land are red with the blood of little children?

“What are these shrinking hearts and faltering voices here, when the very Dead of our battlefields arise, and call upon us to sign that Parchment, or be accursed forever?

“Sign–and not only for yourselves, but for all ages. For that Parchment will be the Text-book of Freedom–the Bible of the Rights of Man forever!

“Sign–for that declaration will go forth to American hearts forever, and speak to those hearts like the voice of God! And its work will not be done, until throughout this wide Continent not a single inch of ground owns the sway of a British King!

“Nay, do not start and whisper with surprise! It is a truth, your own hearts witness it, God proclaims it.–This Continent is the property of a free people, and their property alone. [17-second applause] God, I say, proclaims it!

“Look at this strange history of a band of exiles and outcasts, suddenly transformed into a people–look at this wonderful Exodus of the oppressed of the Old World into the New, where they came, weak in arms but mighty in Godlike faith–nay, look at this history of your Bunker Hill–your Lexington–where a band of plain farmers mocked and trampled down the panoply of British arms, and then tell me, if you can, that God has not given America to the free?

“It is not given to our poor human intellect to climb the skies, to pierce the councils of the Almighty One. But methinks I stand among the awful clouds which veil the brightness of Jehovah’s throne. Methinks I see the Recording Angel–pale as an angel is pale, weeping as an angel can weep–come trembling up to that Throne, and speak his dread message–

“`Father! the old world is baptized in blood! Father, it is drenched with the blood of millions, butchered in war, in persecution, in slow and grinding oppression! Father–look, with one glance of Thine Eternal eye, look over Europe, Asia, Africa, and behold evermore, that terrible sight, man trodden down beneath the oppressor’s feet–nations lost in blood–Murder and Superstition walking hand in hand over the graves of their victims, and not a single voice to whisper, “Hope to Man!”‘

“As God lives, my friends, I believe that to be his voice! Yes, were my soul trembling on the wing for Eternity, were this hand freezing in death, were this voice choking with the last struggle, I would still, with the last impulse of that soul, with the last wave of that hand, with the last gasp of that voice, implore you to remember this truth–God has given America to the free!

“Yes, as I sank down into the gloomy shadows of the grave, with my last gasp, I would beg you to sign that Parchment, in the name of the God, who made the Saviour who redeemed you–in the name of the millions whose very breath is now hushed in intense expectation, as they look up to you for the awful words–`You are free!'”

O many years have gone since that hour–the Speaker, his brethren, all, have crumbled into dust, but it would require an angel’s pen to picture the magic of that Speaker’s look, the deep, terrible emphasis of his voice, the prophet-like beckoning of his hand, the magnetic flame which shooting from his eyes, soon fired every heart throughout the hall!

The work was done. A wild murmur thrills through the hall.–Sign? Hah? There is no doubt now. Look! How they rush forward–stout-hearted John Hancock has scarcely time to sign his bold name, before the pen is grasped by another–another and another! Look how the names blaze on the Parchment–Adams and Lee and Jefferson and Carroll, and now, Roger Sherman the Shoemaker.

And here comes good old Stephen Hopkins–yes, trembling with palsy, he totters forward–quivering from head to foot, with his shaking hands he seizes the pen, he scratches his patriot-name.

Then comes Benjamin Franklin the Printer…. 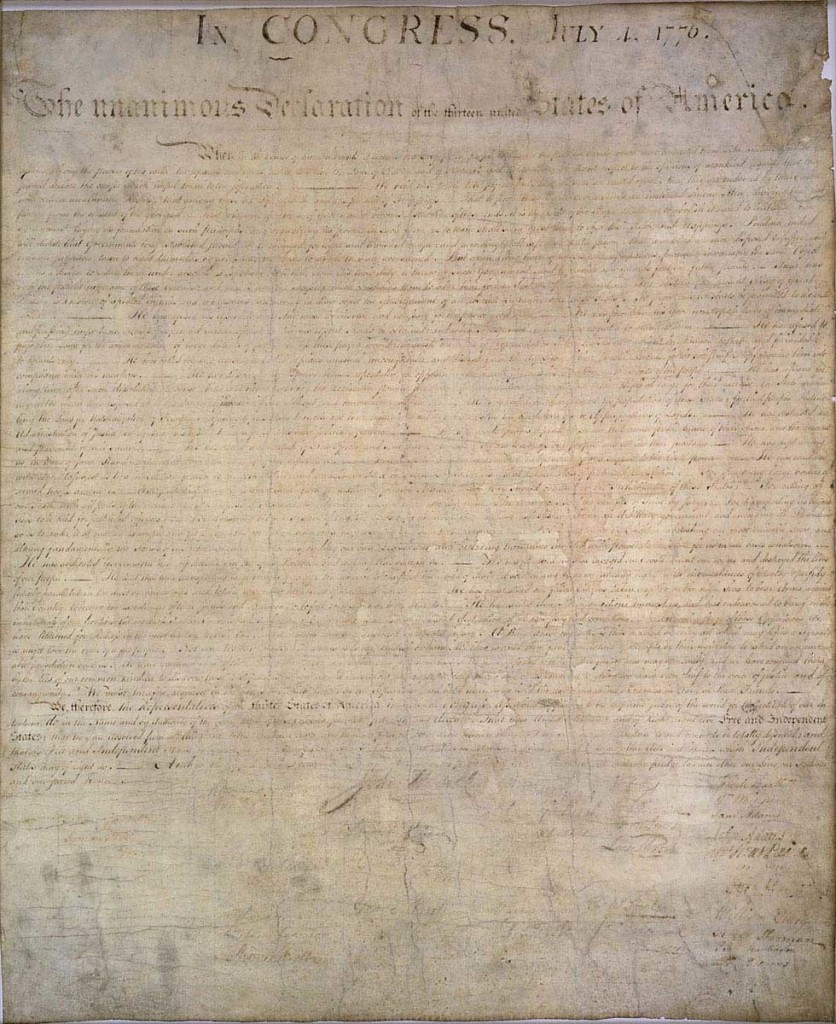 The Original Declaration of Independence

And now the Parchment is signed; and now let word go forth to the People in the streets–to the homes of America–to the camp of Mister Washington, and the Palace of George the Idiot-King–let word go out to all the earth–

And, old man in the steeple, now bare your arm, and grasp the Iron Tongue, and let the bell speak out the great truth:

FIFTY-SIX TRADERS, LAWYERS, FARMERS AND MECHANICS HAVE THIS DAY SHOOK THE SCHACKLES OF THE WORLD!

Hark! Hark to the toll of that Bell!

Is there not a deep poetry in that sound, a poetry more sublime than Shakespeare or Milton?

Is there not a music in the sound, that reminds you of those awful tones which broke from angel-lips, when news of the child Jesus burst on the shepherds of Bethlehem?

For that Bell now speaks out to the world, that–

GOD HAS GIVEN THE AMERICAN CONTINENT TO THE FREE–THE TOILING MILLIONS OF THE HUMAN RACE–AS THE LAST ALTAR OF THE RIGHTS OF MAN ON THE GLOBE–THE HOME OF THE OPPRESSED, FOREVERMORE!

Are we not bought with a price?

This reading is taken from the book Washington and His Generals: or, Legends of the Revolution by George Lippard, published in 1847.

Manly P. Hall, in his book “The Secret Destiny of America” chapter 17, wrote:

“Some years ago, while visiting the Theosophical colony at Ojai, California, A. T. Warrington, esoteric secretary of the society, discussed with me a number of historical curiosities, which led to examination of his rare old volume of early American political speeches of a day earlier than those preserved in the first volumes of the Congressional Record.
He made particular mention of a speech by an unknown man at the time of the signing of the Declaration of Independence. The particular book was not available at the moment, but Mr. Warrington offered to send me a copy of the speech, and he did; but unfortunately neglected to append the title or the date of the book. He went to India subsequently, and died at the Theosophical headquarters at Adyar, in Madras. …”

The Mysterious Rosicrucian Who was the Father of the American Republic The story behind the Speech of the Unknown.

Editor: In esoteric circles, many believe that the unknown man was Saint Germain. Only a master of his attainment could have charged the atmosphere of the room with such fire that all fear melted away. He had assembled many of his most stalwart friends (e.g. Ben Franklin) from over the centuries to embody at that point in time and space to help create a country dedicated to freedom, the most important freedom being that of religion. His greatest ally in that cause was none other than George Washington. The father of our country was not in the room of course. He was not a delegate. Go to The Mystical George Washington below, to learn of his extraordinary connection to God and the secret destiny of America.