The search for space aliens just hit a speed bump

The search for space aliens just hit a speed bump

Spotting signs of life in an exoplanet’s atmosphere may be tougher than we thought. 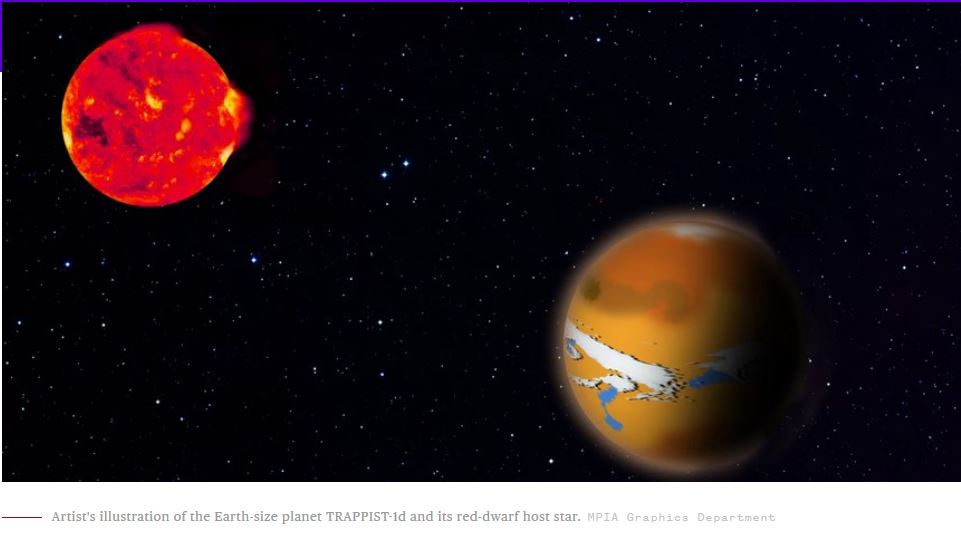 Spotting signs of life in an alien planet’s atmosphere may be tougher than scientists had thought.

One prominent such “biosignature” target, ozone, may get trapped near the equators of Proxima b, TRAPPIST-1d and other potentially habitable worlds that orbit close to their host stars, making the gas hard to detect from afar, a new study suggests.

“Absence of traces of ozone in future observations does not have to mean there is no oxygen at all,” study lead author Ludmila Carone, of the Max Planck Institute for Astronomy in Heidelberg, Germany, said in a statement. “It might be found in different places than on Earth, or it might be very well hidden.” [Exoplanet Discovery: The 7 Earth-Sized Planets of TRAPPIST-1 in Pictures]

Ozone is an unstable molecule that consists of three oxygen atoms. Here on Earth, the stuff is generally produced in the atmosphere after ultraviolet (UV) radiation from the sun splits “normal” diatomic oxygen (O2).

The vast majority of Earth’s O2 is generated by living organisms — plants and photosynthetic microbes — so ozone serves as a sort of secondary biomarker, at least for Earth-like life.

Earth’s atmospheric flows distribute most ozone relatively evenly into our planet’s famous ozone layer, which helps shield life from harmful UV radiation. So hypothetical aliens studying Earth from afar with powerful telescopes would have a good chance of detecting the gas. 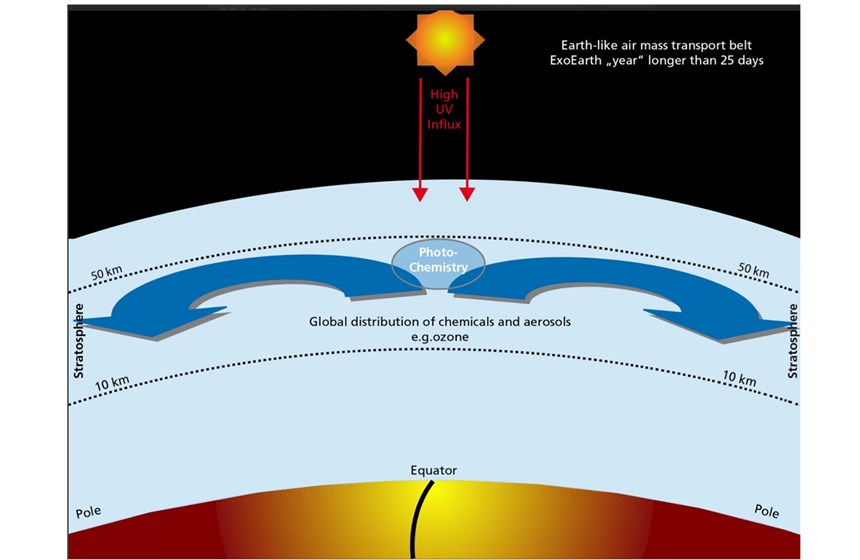 Earth’s atmosphere has a “transportation belt” of air flows that move ozone trappfrom the main production areas near the equator toward the poles. This mechanism is important for creating Earth’s global ozone layer. MPIA (L. Carone and Graphics Dept.)

But the situation is likely different on Proxima b, TRAPPIST-1d and other tidally locked worlds — those that always show the same face to their parent stars, and therefore have a “dayside” and a “nightside” — according to Carone and her colleagues. (Tidal locking is a consequence of a very tight orbit; TRAPPIST-1d and Proxima b complete one lap around their stars every four Earth days and 11 Earth days, respectively.)

Modeling work performed by the researchers indicates that, on planets with orbital periods of 25 Earth days or less, airflows tend to concentrate ozone (and other photochemically produced molecules) in an equatorial band.

“We all knew from the beginning that the hunt for alien life will be a challenge,” Carone said. “As it turns out, we are only just scratching the surface of how difficult it really will be.”

The new results also suggest that worlds like Proxima b don’t have a global ozone layer. That may or may not have a significant negative effect on their habitability, Carone said. 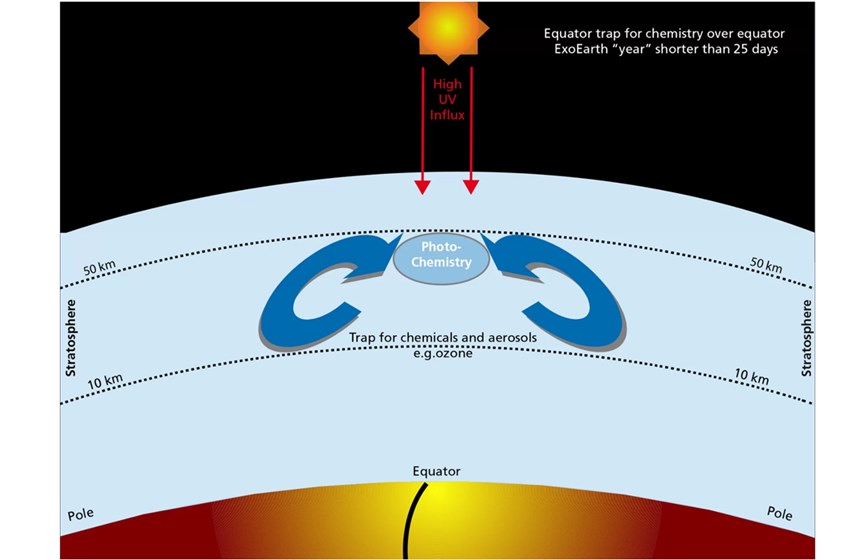 Tidally locked exoplanets could have air flows that trap ozone in the equatorial regions, presenting a previously unforeseen complication for the search for traces of life on these planets. MPIA (L. Carone and Graphics Dept.)

“Proxima b and TRAPPIST-1d orbit red dwarfs, reddish stars that emit very little harmful UV light to begin with,” she said in the statement. (Tidally locked planets pretty much have to orbit dim dwarf stars to be habitable; worlds that orbit so close to sunlike stars are far too hot to host life as we know it.)

“On the other hand, these stars can be very temperamental, and prone to violent outbursts of harmful radiation, including UV,” she added. “There is still a lot that we don’t know about these red dwarf stars. But I’m confident we will know much more in five years.”

In five years, astronomers will have a lot more data — from telescopes such as NASA’s $8.8 billion James Webb Space Telescope, which is scheduled to launch in early 2019 — to inform their inferences about the habitability of red-dwarf planets. And advances in modeling techniques over this time span should help as well, study team members said.

The new study will appear in the Feb. 1, 2018, issue of the journal Monthly Notices of the Royal Astronomical Society.