The saga of ‘Pizzagate’: The fake story that shows how conspiracy theories spread

The saga of ‘Pizzagate’: The fake story that shows how conspiracy theories spread 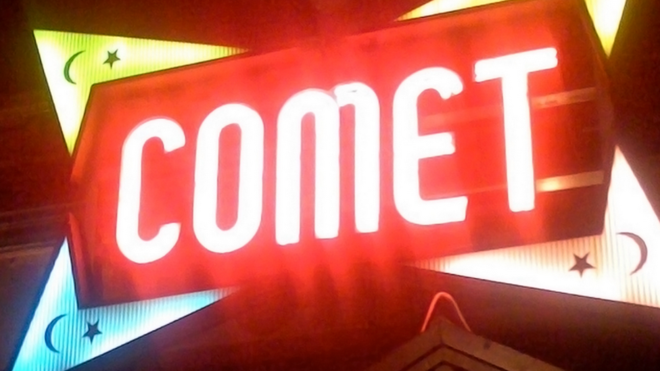 No victim has come forward. There’s no investigation. And physical evidence? That doesn’t exist either.

But thousands of people are convinced that a paedophilia ring involving people at the highest levels of the Democratic Party is operating out of a Washington pizza restaurant.

So how did this fake story take hold amongst alt-right Trump supporters and other Hillary Clinton opponents?

Let’s start with the facts.

In early November, as Wikileaks steadily released piles of emails from Clinton’s campaign chairman John Podesta, one contact caught the attention of prankster sites and people on the paranoid fringes.

James Alefantis is the owner of Comet Ping Pong, a pizza restaurant in Washington. He’s also a big Democratic Party supporter and raised money for both Barack Obama and Hillary Clinton. He was once in a relationship with David Brock, an influential liberal operative.

Alefantis – who’s never met Clinton – appeared in the Podesta emails in connection with the fundraisers.

And from these thin threads, an enormous trove of conspiracy fiction was spun.

Users of 4chan, a message board known for free speech, extreme content and trollish behaviour, began posting speculation and supposed connections gleaned from internet searches. They trawled Alefantis’ Instagram feed for pictures of children and the modern art which lines his restaurant’s walls, and dreamt up a paedophile sex ring involving prominent politicians and political donors.

Soon there were protesters outside of Comet Ping Pong. Alefantis even invited some of them in – they filmed the encounter and put it on YouTube.

“They ignore basic truths,” Alefantis tells BBC Trending. For instance, the conspiracy supposedly is run out of the restaurant’s basement. “We don’t even have a basement.”

The conspiracy theory bubbled up from 4chan onto the mainstream internet when a Reddit user posted a long document with all of the “evidence” several days before the US election. It first appeared on a section of the site popular with Donald Trump supporters from the extremist white nationalist alt-right.

Alefantis, along with Comet Ping Pong employees and others, started to get threatening messages. He locked his Instagram account.

The fake story remained the preserve of 4chan and alt-right Reddit until mid-November, when Turkish pro-government media outlets suddenly took an intense interest.

Their tweets were in Turkish, but they used the English hashtag: #Pizzagate.

As outlined by Efe Kerem Sozeri of the Daily Dot, supporters of Turkish President Recep Tayyip Erdogan cottoned onto the tale as a way to accuse opponents of hypocrisy.

Those opponents, the logic goes, had been sharply critical of Erdogan following the revelation of a real child abuse scandal at a Turkish government-linked foundation. So why weren’t they similarly outraged about “pizzagate”?

The rumour also provided a distraction from another controversy: Erdogan’s party also recently proposed a controversial draft bill that would have given amnesty to child abusers if they married their victims. It was later withdrawn after protests.

Sozeri says liberal and secular opponents of Erdogan, already sensitive to mistreatment of children, also picked up on the rumours.

The Turkish tweets boosted “pizzagate” to whole new levels of prominence online. Around the same time, Donald Trump backed away from talk of an investigation of his defeated opponent over her use of a private email server while she was Secretary of State.

On Twitter alt-right activists, conservative journalists, and others who had urged Clinton’s prosecution over the emails – took up the “pizzagate” cause with renewed vigour. 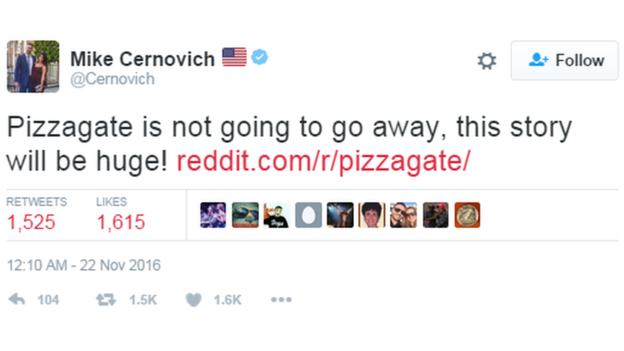 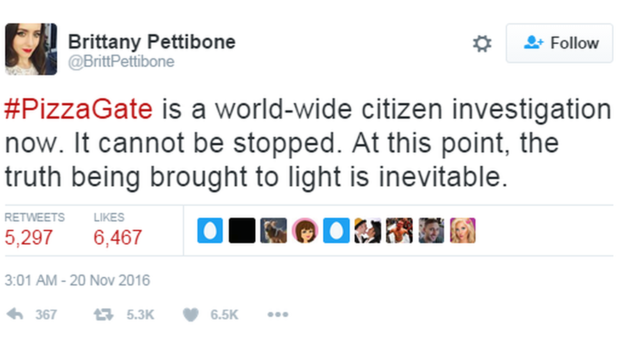 Despite the complete lack of physical evidence or victim testimony, there are reasons why the hardcore conspiracy theorists are particularly sensitive to allegations of child sex abuse.

It’s known, for instance that Bill Clinton and Donald Trump flew on the private plane of convicted child abuser Jeffery Epstein. Tony Podesta, the brother of the Clinton aide whose emails were hacked, was a friend of Dennis Hastert, a Republican politician who earlier this year was sentenced to 15 months in prison, and has admitted abusing boys. The Jimmy Savile scandal in the UK has featured in speculation as an example of a serial child abuser getting away with his crimes.

Viren Swami, professor of social psychology at Anglia Ruskin University, says “pizzagate” might well be an example of a trend in a hyper-partisan America, where conspiracy theories become fodder for political factions.

“What’s happening in the US over the last year or two is that conspiracy theorising is being deployed as a political weapon,” he says. “And that’s a very big change in the way that conspiracy narratives are being used.”

The saga has prompted debunkers by the New York Times and Fox News, among many others, but no factual news story has slowed the torrent of Tweets from the true believers.

Other stories have fuelled the rumours and prompted claims of a cover up. For instance, Reddit deleted a “pizzagate” thread – the page now reads “we don’t want witchhunts on our site” – and its CEO admitted altering posts made by Donald Trump supporters.

Alefantis says threats against him, his staff and his customers have reduced somewhat since the height of the social media flurry, but that he is still wary of the conspiracy mongers.

“It’s very scary to be under a social media attack, a lot of threats are death threats or serious continuing threats by very impassioned people,” he told Trending. He’s reported the threats to the FBI and local police.

“I consider this to be a politically orchestrated attack,” he says. But it hasn’t discouraged him from continuing to be involved in politics: “I like to push back because I consider these threats against me, the artists on our walls, the musicians who play here and my customers here as an assault on first amendment rights and my right to freedom of expression.”

Meanwhile, on 4chan, where the whole saga started, while some users continued to promote the rumours, others were lamenting what had happened.

“I’m sorry to say this guys but it was a mistake,” said one recent post. “Not every conspiracy theory is true.”

“Moral panics are not something new and you’re just experiencing a new cycle of it,” said another. “You guys have a bunch of creepy pictures and you’re finding symbols and other circumstantial bunk… You guys have absolutely nothing and it’s a little embarrassing that you guys are on a rabid witch hunt based on this evidence.

“Are you guys even aware of how stupid all of this is.”