The Reality Of It: “Immigration Can NEVER Be An Effective Way To Deal With The Suffering People Of The World” (Video Presentation)

The Reality Of It: “Immigration Can NEVER Be An Effective Way To Deal With The Suffering People Of The World” (Video Presentation)

by Mac Slavo, published by Shift Plan, on February 5th, 2017 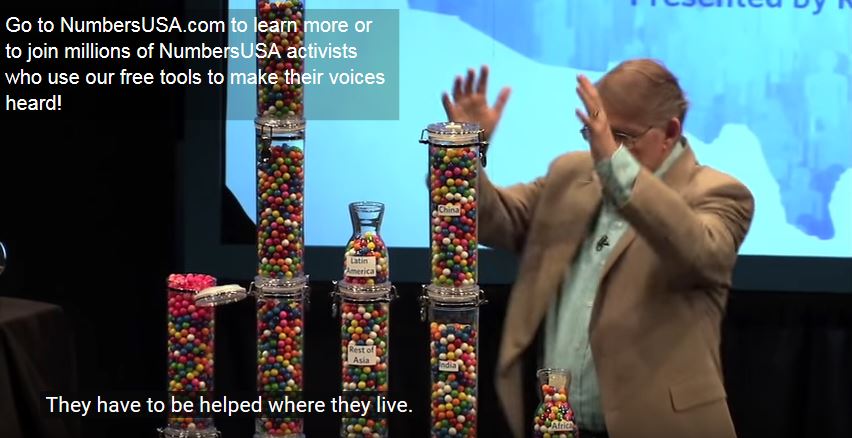 The most oft cited reason by opponents of President Trump’s immigration policies for why America should open its borders to the millions of impoverished and persecuted individuals around the world often center around humanitarian reasons. As a rich country with plenty of land mass, we should be able to take in anyone and everyone who may be in need, right?

While that notion, like Marx-Engels’ ideas for taking from those who have the ability and giving to those who need, may seem great on paper, successfully implementing such policies in the real world is starkly different.

According to Census Bureau statistics, some 1.3 million foreign-born individuals legally immigrated to the United States in 2014. That figure doesn’t include the nearly one million immigrants that enter the country illegally each year. Those who support open border immigration have said that we need to take in even more people.

But according to journalist Roy Beck, taking in one million people per year makes almost no difference in the grand scheme of things because for every million we bring into the United States, another 80 million people yearly are born into countries with extreme levels of poverty, violence or war. According to Beck, even opening our borders to five million more people per year would do nothing to stem the the real problems.

In what is one of the most viewed immigration policy videos on the internet from Numbers USA, Beck ingeniously utilizes gumballs to demonstrate why open borders simply will not work. As well, he provides a seemingly novel solution that has for decades fallen on deaf ears:

We never get ahead of what’s happening in these countries… Don’t you see? Immigration can never be an effective or significant way to deal with the suffering people of the world… they have to be helped where they live…

99.9% of them will never be able to immigrate to a rich country… there is no hope for that… they have to bloom where they’re planted… the only place that 99.9% of these people can be helped is where they live… let’s help them there.

In short: taking in millions of immigrants doesn’t even make a dent.

So for those utilizing immigration as justification for violent protests and kinetic civil war, or for those who follow such narratives blindly based strictly on emotions that are devoid of any rational thought, we encourage you to consider the reality of bringing in millions of immigrants from impoverished countries.

And don’t just consider the non-effect of such policies as they relate to the global humanitarian situation, but consider the implications this has on America’s resources, as well as our citizens, who will be burdened with heavy taxation to cover the costs.

Even if we went by the most radical proposals in Washington, which are to actually double our immigration to two million year… which would totally overwhelm our physical, natural and social infrastructures, we couldn’t even make a visible difference.