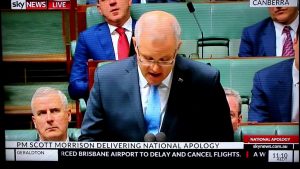 On behalf of all survivors of Child Sexual Abuse & Satanic Ritual Abuse (SRA), I would like to thank our Prime Minister Scott Morrison for the National Apology today. You have been heard. There is much work yet to do, however our Prime Minister has made an emotional, powerful & restorative first step.

The achievements of the Royal Commission into Institutional Responses to Child Sexual Abuse are a tribute to the victims and survivors, their families and supporters. Their courage has helped create a culture of accountability and of trust in children’s voices that help all of us take responsibility for keeping children safe and well.

On Monday 22 October 2018, the Prime Minister of Australia, the Hon Scott Morrison MP, will deliver the National Apology to Victims and Survivors of Institutional Child Sexual Abuse at Parliament House in Canberra The Apology was developed on the advice of an independent, survivor-focused Reference Group and from consultations with communities throughout Australia from May to July 2018. https://www.nationalapologyconsultati…