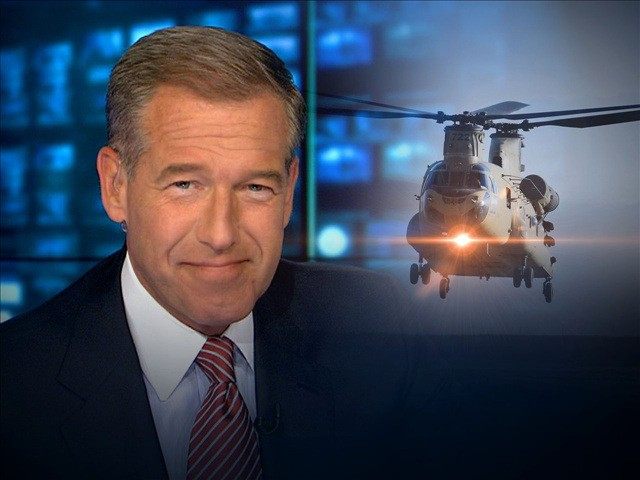 How in the world did NBC News let its biggest star and face of its division run around America for more than ten years telling stolen valor lies, lie-lies, whoppers, white lies, exaggerations, and — if you want to be charitable — embellishments.

Brian Williams didn’t just spew bald-faced lies from David Letterman’s couch. He lied repeatedly on the air at NBC News and its affiliates. He lied to NBC News legend Tim Russert. Stories Williams’ shared with NBC’s own Tom Brokaw both on the air and at Columbia Journalism school are now disputed. Things told to other reporters don’t add up.

Numerous accounts now verify that NBC News not only wanted Brian Williams out there building his brand with the likes of Jon Stewart, David Letterman, and Saturday Night Live, but that the NBC brass knew their star was a serial liar. According to the Washington Post, Williams made 80 appearances on entertainment shows, and…

…when Williams was talking about himself outside the confines of his anchor’s desk, he seemed to want to make his experiences more dramatic, colleagues said. He was the biggest news anchor in the country, the undisputed ratings champ, but he often pushed stories to their limit — and sometimes beyond.

Apparently, as long as Brian Williams’ lies helped build the NBC News brand and the “Nightly News” ratings, nobody in charge chose to say anything. Now that he’s been caught, NBC News is finally taking action while telling what looks like a big fat lie of its own — the lie that NBC News didn’t know about this the whole time.

Below is a list of the things Williams has said over the years that are either proven lies, suspected lies, disputed by on-the-record eye witnesses, or contradicted by Williams himself.  I lost count after 30. And I probably missed a few.

Below, I have copy and pasted directly from the sources linked. The quotes all belong to Williams. The descriptions of what Williams’ said are written by the linked news source.

— “A terrible moment a dozen years back during the invasion of Iraq when the helicopter we were traveling in was forced down after being hit by an RPG.” — NBC Nightly News, January 30, 2015

— “It was no more than 120 seconds later that the helicopter in front of us was hit.” — Brian Williams to Tim Russert on CNBC, March 2005

— “I was instead following the aircraft” [that was struck by the RPG]. — NBC Nightly News, Wednesday February 5, 2015

— Williams’ original [March 26, 2003, NBC News] report indicated that a helicopter in front of his was hit. — PolitiFact

— NBC publishes a book [in 2003], “Operation Iraqi Freedom,” in which they describe Williams’ experience, implying that his helicopter sustained fire. — PolitiFact

— May 2008: Williams writes another [NBC News] blog, responding to a note from a soldier who he met in Iraq. In this post, Williams indicates that he was in a helicopter that took fire. — PolitiFact

— “I’ve done some ridiculously stupid things under that banner, like being in a helicopter I had no business being in Iraq with rounds coming into the airframe,” he said [to Alec Baldwin in March 2014] — PolitiFact

— “We were in some helicopters. What we didn’t know was, we were north of the invasion. We were the northernmost Americans in Iraq. We were going to drop some bridge portions across the Euphrates so the Third Infantry could cross on them. Two of the four helicopters were hit, by ground fire, including the one I was in, RPG and AK-47. — Williams to Letterman on March 26, 2013 — PolitiFact.

— In the initial NBC broadcast where he described his 2003 Iraq reporting mission, embattled NBC anchor Brian Williams falsely claimed that “we saw the guy . . . [who] put a round through the back of a chopper,” which he further and incorrectly claimed was “the Chinook [helicopter] in front of us.” — Breitbart

— “We flew over a bridge. He waved to the lead pilot very kindly. With that someone else removed the tarp, stood up, and put a round through the back of a chopper missing the rear rotor by four or five feet.” — To Tom Brokaw on March 26, 2003 — Breitbart

— “[Y]ou go back to Iraq, and I looked down the tube of an RPG that had been fired at us and it hit the chopper in front of ours.” — Williams to Fairfield University in 2007 —  Ace of Spades

— “We have some idea which of our special operations teams carried this out,” Williams said on “The Late Show With David Letterman” the day after the raid [May 2, 2011]. “It happens to be a team I flew into Baghdad with, on the condition that I would never speak of what I saw on the aircraft, what aircraft we were on, what we were carrying, or who we were after.” — Huffington Post

— “Now, people might be hearing about SEAL Team 6,” Williams said the next night, May 3, 2011, on “Nightly News.” “I happen to have the great honor of flying into Baghdad with them at the start of the war.” — Huffington Post

— “I flew into Baghdad, invasion plus three days, on a blackout mission at night with elements of SEAL Team 6, and I was told not to make any eye contact with them or initiate any conversation,” Williams said. (Three days after the U.S. invasion would have been March 22, 2003, not April 9, 2003, which was the day Williams broadcasted from the Baghdad airport.) — To David Letterman in May of 2012 — Huffinton Post

— In the 2012 “Late Show” appearance, Williams also recalled carrying a box of Wheat Thins, which he said a hungry special operator dug into with a “hand the size of a canned ham.” They got to talking, and Williams told the commando how much he admired his knife. “Darned if that knife didn’t show up at my office a couple weeks later,” Williams told Letterman. — Huffington Post

— “About six weeks after the Bin Laden raid, I got a white envelope and in it was a thank-you note, unsigned,” Williams said on “Letterman” in January 2013. “And in it was a piece of the fuselage of the blown-up Black Hawk in that courtyard. Sent to me by one of my friends.” — Huffington Post

— In February 2014, Williams elaborated on the helicopter gift in another media appearance, this time on the sports talk show hosted by Dan Patrick. “It’s one of the toughest things to get,” he said, “and the president has a piece of it as well … It’s made of a material most people haven’t seen or held in their hands.” — Huffington Post

Fall of the Berlin Wall

— “I’ve been so fortunate,” he said during a 2008 forum at the Ronald Reagan Presidential Library. “I was at the Brandenburg Gate the night the wall came down.” — CNN

— While delivering the commencement address at Catholic University that year [2004], Williams said the “highlight” of his time at the school “was in this very doorway, shaking hands with the Holy Father during his visit to this campus.” — CNN

— “There were Katyusha rockets passing just beneath the helicopter I was riding in,” he told a student interviewer from Fairfield (Conn.) University that year [2007]. — Washington Post

— “All of us watched [in the Superdome] as one man committed suicide.” — Williams to Tom Brokaw, at Columbia University in 2013.

–. My week, two weeks there was not helped by the fact that I accidentally ingested some of the floodwater. I became very sick with dysentery.” — Williams to Tom Brokaw at Columbia University in 2013.

— “Our hotel was overrun with gangs. I was rescued in the stairwell of a five-star hotel in New Orleans by a young police officer – we are friends to this day.” — Williams to Tom Brokaw at Columbia University in 2013.

— “When you look out of your hotel window in the French Quarter and watch a man float by face down, when you see bodies that you last saw in Banda Aceh, Indonesia, and swore to yourself that you would never see in your country,” Williams told Eisner [in 2006], who suggested in the interview that Williams emerged from former NBC News anchor Tom Brokaw’s shadow with his Katrina coverage. — USA Today

— In Williams’s telling, the pathos of the scene extended to his crew’s access to food. “We were desperate for food and drink. But not like the people we were seeing in the streets,” he said in the documentary “In His Own Words: Brian Williams on Hurricane Katrina.” — Washington Post

— “I remember one such house fire — the structure was fully involved with flames and smoke. I was wearing a breathing apparatus, conducting a search on my hands and knees, when I felt something warm, squishy and furry on the floor of a closet. I instinctively tucked it in my coat.” — October 2011, USA Today

— “All I ever did as a volunteer fireman was once save two puppies.” — January 2007, Esquire

In a 2005 interview with Esquire magazine, Williams said a thief drew on him in the 1970s — leaving him “looking up at a thug’s snub-nosed .38 while selling Christmas trees out of the back of a truck.” – NY Post

— “One day, I’m at the copy machine in the White House and Walter Mondale comes up behind me and clears his throat. A classic throat-clearing. I thought people only did that in movies, but it turns out vice-presidents do it, too. Anyway, it makes for an exceptionally good morning, and I run from the White House to the GW campus for class. I’m still wearing my West Wing hard pass on a chain, and when my professor sees it, he admits that he’s only been to the White House on the public tour. And I thought to myself, This is costing me money that I don’t have, and I’m a young man in too much of a hurry. So I left school.” — Brian Williams to Esquire, 2005

— But then a friend invited him to drive to Washington, D.C., for a weekend, and everything changed. Smitten with the city and its youthful energy, Williams decided to move there. He transferred what credits he could from Brookdale to Catholic University and took a job in the public relations department to help pay his expenses. He landed an internship at the White House, and when that ended, he answered an ad for a clerking job at a broadcasting association. — 2009, New Jersey-Star Ledger