The Illusion of Time: Physics Reveals Time Is Not Real Read more

The Illusion of Time: Physics Reveals Time Is Not Real  Read more

By Bob Pershing, published on Learning Mind, on January26, 2016 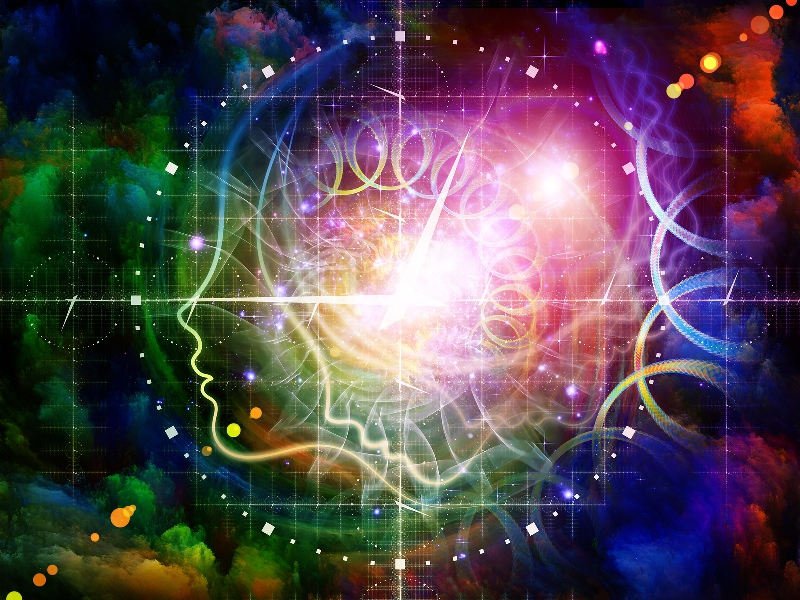 According to certain theories in physics, the time is not real and is nothing but a product of our consciousness. Let’s explore these theories and the concept of the illusion of time.

Our daily experience, as well as our predecessors’, regards time as a flowing entity that defines what we conceive to be the past and also what we conceive as the future. Time is something that is directly linked to our brain’s consciousness abilities. Our mind records what we have seen in the past and can also retrieve it. In our daily experience, our mind cannot construct what is going to happen in the future.

In Newton’s classical mechanics that has been the masterpiece of classical physics since its introduction in 1640, time is defined as an absolute characteristic of the universe, independent from our location. It is regarded as a straight passage of events that defines past, present and future.

In 1905 and later in 1917, with the introduction of the Einstein’s theories of relativity (special theory of relativity and general theory of relativity), the idea of absoluteness of time received a heavy blow and it was proved that there was no absolute time. Indeed, it was proved that the time difference between two events totally depends on such parameters as speed, gravitational field at the location of the observer, and that two simultaneous events for an observer would not be simultaneous for other observers.

Quantum Mechanics (QM) went even further and suggested that time is a discrete property and there is no continuous time with the quantum of time being of the order of 10-43 s. In this interpretation, time is still regarded as a reality, and the statistical interpretation of causality principle within the framework of the Heisenberg’s uncertainty principle is still respected.

However, recent discoveries at the quantum level are now directing us to the idea of the illusion of time and the conclusion that time actually may not exist and that it exists only with regards to an arbitrary reference point. In order to make it simple, let us have a comparison between space and time coordinate.

Generalizing the same concept to the time coordinate as the 4th dimension will lead us to the result that the past and the future may indeed be reversed for another observer at a different reference point. This simple comparison can be best described in a picture that is named block universe, which is presented below. 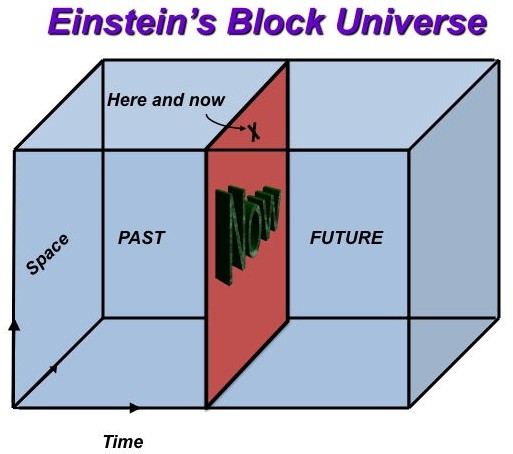 This is the view of the universe by an observer outside of space and time looking from a vantage point at our universe. In this picture past and future are not absolute; rather, they depend on the reference point of the observer. In this theory, the concept of past and future for time are as relative as the concept of right and left for location.

In the 1970s, the famous US physicist John Archibald Wheeler along with the physicist Bryce Dewitt, working on the unification of quantum mechanics and Einstein’s theory of gravitation, developed an equation in which time as a separate concept had no role. The theory was a big step towards the elimination of time from the description of the universe.

This concept, although seemed weird and led to many controversial debates among physicists, was later developed to its extreme limit by the physicist Julian Barbour. According to him, the time is not real and what we regard as the time is no more than changes that lead to the illusion of time. This notion of time is in total contradiction with the Newtonian concept of time as a linear and homogenous passage of a river and that of Einstein as the 4th dimension.

According to Barbour, what our mind records are moments that he calls “Nows” and what we perceive as the passage of time is just our move through a succession of “Nows”. While these may be interpreted by our conscious as the passage of time from the past to the future, they may be interpreted the reverse for another observer in another reference point.

The concept is already quite weird, but Barbour has presented answers to many seemingly unresolved mysteries of his theory. In his theory, events like birth and death are not regarded as a proof for the passage of time; they are rather cycles of energy that our conscious mind perceives as if we are watching a linear passage of time.

The theory although is currently a highly abstract one, but there are some new empirical results favoring it. For example, new findings by researchers at Australian National University (ANU) studying the Wheeler’s theory at the atomic scale suggest that what we perceive as reality may not exist unless it is measured, which is in line with Barbour’s theory and the general concept of the illusion of time. There have to be more experiments and research to result in a solid proof of the theory, but with the current momentum of scientific research, the theory may receive stronger confirmation in the next coming year.

I started writing articles as an amateur journalist since I was a high school student. My articles cover stories for children magazines. But before launching my career as a journalist, I earned my MS in Physics and electrical engineering and conducted research in radar communication. Owing to my previous background and my strong interest in writing articles and putting a human face on groundbreaking stories about science, technology, health and sustainability, I decided to work as a part-time freelance journalist, writing articles in English, French and Arabic media. I also enjoy drawing caricatures which I normally send them to French media. While I am at home I love to solve mathematics and play soccer. I live in UK.