The Heart Has Its Own ‘Brain’ and Consciousness

The Heart Has Its Own ‘Brain’ and Consciousness

Far more than a simple pump, as was once believed, the heart is now recognized by scientists as a highly complex system with its own functional “brain.”

Research in the new discipline of neurocardiology shows that the heart is a sensory organ and a sophisticated center for receiving and processing information. The nervous system within the heart (or “heart brain”) enables it to learn, remember, and make functional decisions independent of the brain’s cerebral cortex. Moreover, numerous experiments have demonstrated that the signals the heart continuously sends to the brain influence the function of higher brain centers involved in perception, cognition, and emotional processing.

The heart generates a continuous series of electromagnetic pulses in which the time interval between each beat varies in a dynamic and complex manner. The heart’s ever-present rhythmic field has a powerful influence on processes throughout the body. We have demonstrated, for example, that brain rhythms naturally synchronize to the heart’s rhythmic activity, and also that during sustained feelings of love or appreciation, the blood pressure and respiratory rhythms, among other oscillatory systems, entrain to the heart’s rhythm.

[How The Heart-Brain Connection Works 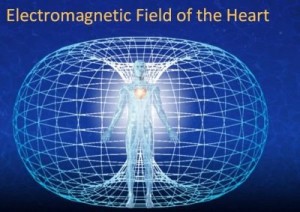 We propose that the heart’s field acts as a carrier wave for information that provides a global synchronizing signal for the entire body. Specifically, we suggest that as pulsing waves of energy radiate out from the heart, they interact with organs and other structures. The waves encode or record the features and dynamic activity of these structures in patterns of energy waveforms that are distributed throughout the body. In this way, the encoded information acts to in-form (literally, give shape to) the activity of all bodily functions—to coordinate and synchronize processes in the body as a whole. This perspective requires an energetic concept of information, in which patterns of organization are enfolded into waves of energy of system activity distributed throughout the system as a whole.

Basic research at the Institute of HeartMath shows that information pertaining to a person’s emotional state is also communicated throughout the body via the heart’s electromagnetic field. The rhythmic beating patterns of the heart change significantly as we experience different emotions. Negative emotions, such as anger or frustration, are associated with an erratic, disordered, incoherent pattern in the heart’s rhythms. In contrast, positive emotions, such as love or appreciation, are associated with a smooth, ordered, coherent pattern in the heart’s rhythmic activity. In turn, these changes in the heart’s beating patterns create corresponding changes in the structure of the electromagnetic field radiated by the heart, measurable by a technique called spectral analysis.

More specifically, we have demonstrated that sustained positive emotions appear to give rise to a distinct mode of functioning, which we call psychophysiological coherence. During this mode, heart rhythms exhibit a sine wave-like pattern and the heart’s electromagnetic field becomes correspondingly more organized.

At the physiological level, this mode is characterized by increased efficiency and harmony in the activity and interactions of the body’s systems. [1]

In sum, our research suggests that psychophysiological coherence is important in enhancing consciousness—both for the body’s sensory awareness of the information required to execute and coordinate physiological function, and also to optimize emotional stability, mental function, and intentional action. Furthermore, as we see next, there is experimental evidence that psychophysiological coherence may increase our awareness of and sensitivity to others around us. The Institute of HeartMath has created practical technologies and tools that all people can use to increase coherence.

Most people think of social communication solely in terms of overt signals expressed through language, voice qualities, gestures, facial expressions, and body movements. However, there is now evidence that a subtle yet influential electromagnetic or “energetic” communication system operates just below our conscious awareness. Energetic interactions likely contribute to the “magnetic” attractions or repulsions that occur between individuals, and also affect social exchanges and relationships. Moreover, it appears that the heart’s field plays an important role in communicating physiological, psychological, and social information between individuals. 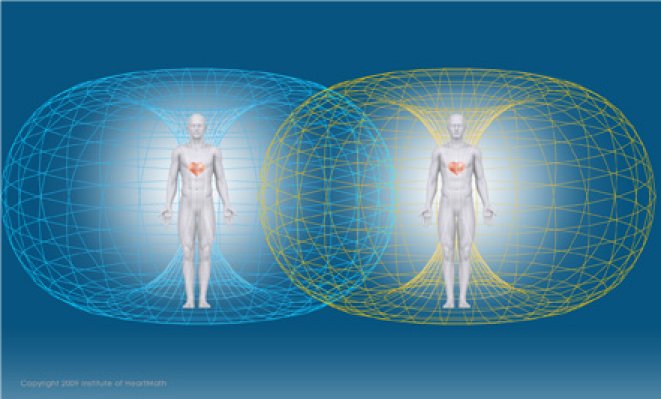 Experiments conducted at the Institute of HeartMath have found remarkable evidence that the heart’s electromagnetic field can transmit information between people. We have been able to measure an exchange of heart energy between individuals up to 5 feet apart. We have also found that one person’s brain waves can actually synchronize to another person’s heart. Furthermore, when an individual is generating a coherent heart rhythm, synchronization between that person’s brain waves and another person’s heartbeat is more likely to occur. These findings have intriguing implications, suggesting that individuals in a psychophysiologically coherent state become more aware of the information encoded in the heart fields of those around them.

The results of these experiments have led us to infer that the nervous system acts as an “antenna,” which is tuned to and responds to the electromagnetic fields produced by the hearts of other individuals. We believe this capacity for exchange of energetic information is an innate ability that heightens awareness and mediates important aspects of true empathy and sensitivity to others Furthermore, we have observed that this energetic communication ability can be intentionally enhanced, producing a much deeper level of nonverbal communication, understanding, and connection between people. There is also intriguing evidence that heart field interactions can occur between people and animals.

In short, energetic communication via the heart field facilitates development of an expanded consciousness in relation to our social world.

The Heart’s Field and Intuition

There are also new data suggesting that the heart’s field is directly involved in intuitive perception, through its coupling to an energetic information field outside the bounds of space and time. Using a rigorous experimental design, we found compelling evidence that both the heart and brain receive and respond to information about a future event before the event actually happens. Even more surprising was our finding that the heart appears to receive this “intuitive” information before the brain. This suggests that the heart’s field may be linked to a more subtle energetic field that contains information on objects and events remote in space or ahead in time. Called by Karl Pribram and others the “spectral domain,” this is a fundamental order of potential energy that enfolds space and time, and is thought to be the basis for our consciousness of “the whole.”

In the same way that the heart generates energy in the body, we propose that the social collective is the activator and regulator of the energy in social systems.

A body of groundbreaking work shows how the field of socioemotional interaction between a mother and her infant is essential to brain development, the emergence of consciousness, and the formation of a healthy self-concept. These interactions are organized along two relational dimensions—stimulation of the baby’s emotions, and regulation of shared emotional energy. Together they form a socioemotional field through which enormous quantities of psychobiological and psychosocial information are exchanged. Coherent organization of the mother-child relations that make up this field is critical. This occurs when interactions are charged, most importantly, with positive emotions (love, joy, happiness, excitement, appreciation, etc.), and are patterned as highly synchronized, reciprocal exchanges between these two individuals. These patterns are imprinted in the child’s brain and thus influence psychosocial function throughout life. (See Allan Schore, Affect Regulation and the Origin of the Self

Some organizing features of the heart field, identified in numerous studies at HeartMath, may also be shared by those of our hypothesized social field. Each is a field of energy in which the waveforms of energy encode the features of objects and events as energy moves throughout the system. This creates a nonlocal order of energetic information in which each location in the field contains an enfolded image of the organization of the whole system at that moment. The organization and processing of information in these energy fields can best be understood in terms of quantum holographic principles. [3]

Another commonality is the role of positive emotions, such as love and appreciation, in generating coherence both in the heart field and in social fields. When the movement of energy is intentionally regulated to form a coherent, harmonious order, information integrity and flow are optimized. This, in turn, produces stable, effective system function, which enhances health, psychosocial well-being, and intentional action in the individual or social group.

Heart coherence and social coherence may also act to mutually reinforce each other. As individuals within a group increase psychophysiological coherence, psychosocial attunement may be increased, thereby increasing the coherence of social relations. Similarly, the creation of a coherent social field by a group may help support the generation and maintenance of psychophysiological coherence in its individual members. An expanded, deepened awareness and consciousness results—of the body’s internal physiological, emotional, and mental processes, and also of the deeper, latent orders enfolded into the energy fields that surround us. This is the basis of self-awareness, social sensitivity, creativity, intuition, spiritual insight, and understanding of ourselves and all that we are connected to. It is through the intentional generation of coherence in both heart and social fields that a critical shift to the next level of planetary consciousness can occur—one that brings us into harmony with the movement of the whole.

For more information on the Institute of HeartMath’s research and publications, please visit www.heartmath.org.

1.Correlates of physiological coherence include: increased synchronization between the two branches of the autonomic nervous system, a shift in autonomic balance toward increased parasympathetic activity, increased heart-brain synchronization, increased vascular resonance, and entrainment between diverse physiological oscillatory systems.
2.Holographic organization is based on a field concept of order, in which information about the organization of an object as a whole is encoded as an interference pattern in energy waveforms distributed throughout the field. This makes it possible to retrieve information about the object as a whole from any location within the field.
3.The term “quantum,” as used in quantum holography, does not mean that this kind of energetic information processing is understood in terms of the principles of quantum physics. Rather, quantum holography is a special, nondeterministic form of holographic organization based on a discrete unit of energetic information called a logon or a “quantum” of information.

Once again, I cannot overemphasize the importance of going within while the Schumann Resonance is rising. If you can connect to nature through your heart and synchronize the heartbeat of the planet to your own heart, you can be assured that you will rise in frequency and vibration in conjunction to Mother Earth.