by Bix Weir, published on The Road To Roota

Let me start off by saying that what I am going to postulate should not in any way be considered fact…because I am not in possession of proof. I am merely postulating on where all the mystery silver comes from to be sold on the physical silver market.

Since the early 2000’s almost every serious silver analyst has been pounding the table that there is no above ground silver available and it is the “buy of a lifetime”. But at the same time, silver prices never seem to live up to their expectation. Of course, anyone with an ounce of common sense can see that the COMEX and LME silver markets are rigged by a powerful cabal of bankers (and others) that seem to be above the law (or more likely, in collusion with the law), but at the end of the day physical silver must be delivered for industrial applications and investors taking possession. So where does it all come from? ….I think I may have stumbled upon the answer!

After a grueling day of watching another COMEX silver rigging operation in late December, I turned on the History Channel for some mindless entertainment. The program that was running was called “Lost Worlds – Secret Cities of the A-Bomb” (you can buy it here http://store.aetv.com/html/product/index.jhtml?id=76496). It was an investigative piece on the Manhattan Project focusing on the Top Secret city that was built in Oakridge, TN and a facility called Y-12. The program was interesting to me, but one part specifically made me jump up out of my seat and run to my computer to find out what it was all about.

During WWII, in order for the scientists to enrich enough Uranium for the A-bomb they had to make the largest electromagnet ever built. It would be called a Calutron and according to the narrator, they needed many tons of copper wiring which they claim was not available at the time due to war shortages. Here is a picture of it: 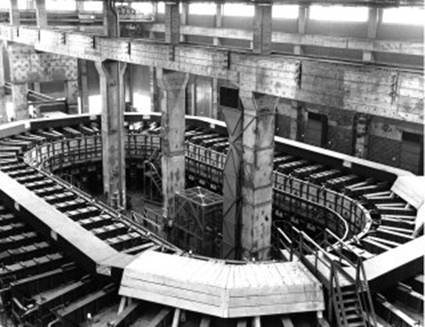 Instead of copper they went to the US Treasury and “borrowed” 14,700 TONS OF SILVER. (…of course silver is a much better conductor of electricity than copper, so the copper shortage story was likely intentionally planted to conceal the necessity of silver). 14,700 tons of silver is about 470,000,000 ounces that were taken from the US vaults, made into silver wire and “busbars”, and installed into the greatest secret project in the history of the world. Let’s call that “deep storage silver” because, theoretically, the Calutrons could be removed and the silver melted back into bars. As a matter of fact, according to the program and government statements, that is what was done in 1954. If you believe that the US Government risked not being able to make nuclear bombs in 1954 I have some lovely swampland in Florida to sell you!!

It is interesting to note that the US Treasury embarked on a “Silver Purchase Program in 1934 with Mexico that ran into the mid 1940’s – the same time that the silver was being transferred out of the Treasury to be used for Y-12.

Here is a picture of the silver magnets being assembled and installed back in 1941: 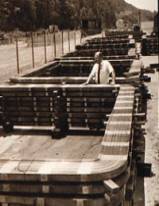 Look at all that SILVER!

Now here is a picture of their enclosures taken with a low quality digital camera (likely mid 1990’s): 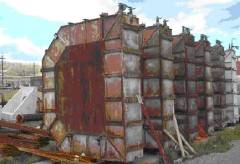 The government claimed back in the 1980’s that there was a new gaseous way to enrich plutonium, which there was, and the Calutrons were not needed. But wait! There are many articles on the internet showing that the Calutrons were in full operation until 1993, then shut down for 3 years and restarted in 1995. In a March 1999 news release Oakridge Laboratories said they got an order from the DOE to finally “retire” the calutrons.

“ORNL has received instructions from DOE to shut the devices down permanently. Up until about a year ago, the calutrons were producing stable isotopes after resuming operations in 1995 following a three-year shutdown.”

The “official” line is that the silver was returned to the Treasury in 1954, but I see no reason for that to occur. The Treasury knew where the silver was and Y-12 was the most important manufacturing facility in human history to that point. This was classic disinformation on the part of the Treasury/Bankers. No way they would risk the Calutrons not working so they never sent the silver back, and Y-12 was operational until the mid-1990’s when other priorities developed in the silver market.

There were 32 Calutrons with 8 of them used for plutonium processing. There was also silver used in the “busbars” for Y-12. I’m no nuclear scientist but lets assume that the Calutrons used about 14,000,000 oz each and the rest was used in the track. This is a stretch but my take is they shut down the 24 non-plutonium Calutrons in the 1993 “stand-down” and sent the silver back to Treasury to be used to suppress the price of silver. This coincides with the additional 10,000 tons of silver shipments to the UK from 1995-1998.

Then, with the Buffet purchase and silver scare in 1998, they went back for the remaining 150M oz of silver and announced the complete shut down of the facility.

Interestingly enough,Y-12 was brought back into operation in 2005:

“The facility was not part of the September 1994 stand-down in which virtually all operations at Y-12 were halted because of safety concerns raised by the Defense Nuclear Facilities Safety Board.”

SO HERE ARE MY CONCLUSIONS:

2) There was no reason to “give back” the silver in 1954 because it would just sit in a vault and the enriched uranium was the most important item in the world to the new nuclear super power. According to the program, enriched uranium was very difficult to mass produce and the Calutrons were the best at it.

3) The US could retrieve the silver when it was needed it by dismantling the Calutrons.

4) The Calutrons ran for 50 years without any technological obsolescence.
http://www.ornl.gov/info/reporter/no1/calutron.htm

5) In the 1990’s something changed such that the US had to a) shutdown the Calutrons for three years b) bring them back on line for a few years c) then completely dismantle them by order of the DOE.

6) From 1995-1998 approximately 10,000 additional tons of US silver was exported to the UK to suppress the physical silver market on the LME.

7) The mid 1990’s corresponds directly with the “strong dollar policy” (fixing of the commodity markets by Greenspan, Clinton, Rubin etc.)

I believe 470,000,000 ounces of silver that was being used as an essential secret component of the Manhattan Project magnets to enrich uranium have been removed to assist in the price suppression of silver. I also believe that the significance of this occurrence can not be underestimated because it means the powers that control the rigging of the silver market were so desperate for physical metal in the 1990’s that a strategic military installation had to be dismantled to retrieve this “deep storage” silver. I contend that over the past 20 years this silver was taken off the market by industrial and investment users such that the silver ETF had to be established (likely using the silver shanghaied from Buffett to save General Re) in order to lease additional paper and divert huge flows of institutional money into a black hole of non-backed paper silver (SLV).

So where does that leave us?…Well, if 10,000 tons or 320m oz were needed from 1995-2001 and then add to that the additional 150M oz from 2001-2014 we’re looking at a burn rate of additional physical of 20m-30m oz per year on average. This is not scientific of course, and it is escalating at a rapid pace because of the investor information on silver spreading.

On October 10, 2006, right before their inventory jumped 20M oz in one day in December, the iShares Silver ETF filed a new (revised) prospectus REMOVING the world “Bullion” from all the references to “Silver Bullion”.

Those are my speculations and although I have no idea if I am right, it sure can explain where all the “mystery silver” came from over the past 15 years.