The Golden Consciousness of New Earth – February to April 2021 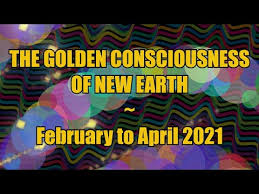 The Golden Consciousness of New Earth – February to April 2021

Magenta Pixie brings forward the White Winged Collective Consciousness of Nine with an energetic update on the metaphysical and the physical realms for the time period from 2nd February through to the end of April 2021. — Channelled, written and narrated by Magenta Pixie. Video compiled by Catzmagick. Magenta Pixie Website: https://www.magentapixie.com