Science fiction becomes fact as scientists develop an acoustic hologram which can hold and move objects, but its uses will be more surgical than Star Wars 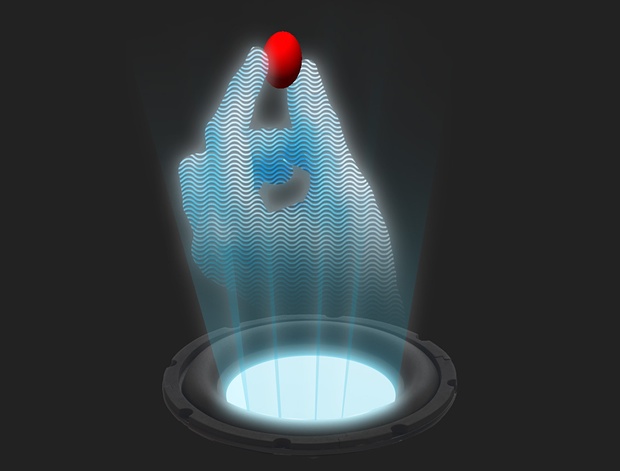 A sonic tractor beam that can grab tiny objects and move them around has been created by scientists in Spain.

They used the same technology to lift and spin objects in the air using only the forces produced by a field of ultrasonic waves.

Though not much use for capturing vessels in the vacuum of space, the team at the Public University of Navarre in Pamplona, Spain, hope the technique can be used to operate microsurgical instruments inside patients’ bodies, and direct drugs to damaged tissues.

Writing in the journal Nature Communications, the researchers describe how they used ultrasound to move tiny polystyrene beads measuring only 3mm across and weighing a fraction of a gram.

“We can move bigger and heavier objects than we have done, but the main application is going smaller to manipulate things inside the human body,” said Asier Marzo, who worked on the project.

Marzo’s team showed that by carefully adjusting the sound waves, they could create moving acoustic holograms that worked like 3D cages, tweezers or rotating spirals that could lift, grab, spin and nudge tiny particles around.

The sonic tractor beam uses a 3D hologram with the shape of a cage or bottle in which the object to be moved is captured. The walls of the cage are created by high pressure ultrasound waves, while inside the cage, the pressure is close to zero.

“When the particle is surrounded by high pressure, it gets trapped there. And we can update the hologram in real time to move the cage towards us, and the particle moves with the trap,” said Marzo.

Because sound waves can travel through body tissues, the scientists see medical applications as a priority for the technology. “It could be used to manipulate kidney stones, clots, or microsurgical instruments that you control from outside, without having to make any incisions in the patient,” said Marzo. “Or you could hold a drug wherever you wanted to inside a patient, so it doesn’t go anywhere else in the body.”

The technology allows for what the scientists call “containerless transportation”, which could find uses in applications where material is dangerous to handle, or at risk of being contaminated by people or machinery.