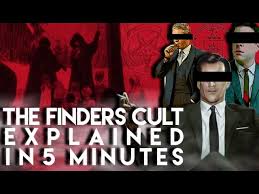 To fully understand what is taking place now, we must journey back to 1987, a year before the Franklin Credit Union Scandal broke. An anonymous person in Tallahassee Florida phoned police upon seeing two men in their late twenties, both dressed in dark suits, traveling with six children, bruised and disheveled. They were living in a van in the park. Of the six children, two showed signs of sexual abuse. They claimed they were in route to Mexico, to what they described as a ‘school for smart kids’. Local police discovered that these men were part of the Washington DC-based cult, the Finders Cult.

BZ: here is a short portion of specific data trail that documents the Finders and the sweeping under the rug… Visit http://www.voxfux.com/features/cia_child_sex.html   for full data trail-

THE CIA TRAFFICS IN DRUGS, CHILD RITUAL SEXUAL ABUSE, AND GLOBAL MURDER
They count on the fact that the more bizarre and perverted they act the safer they are because the average joe cannot even fathom the depths of evil that this agency perpetrates.

One by one, the dots get connected. The same names keep popping up and they are linked with the same activities over and over and over again until the pattern becomes so clear and undeniable, the circumstantial evidence becomes so overwhelming and the picture emerges that is so frightening that it is hard to believe that it is true. The picture that has emerged is that indeed the major institutions of the United States of America, the CIA, the FBI and the many of our governmental and media institutions are involved in child sexual slavery and ritualistic abuse. The same names keep surfacing in relation to the same subjects over and over again. The CIA, child sexual abuse, the Catholic church, George Bush Sr., The secret societies of the Scull and Bones, the Freemasons, The Knights of Malta and others and on and on and on.

If you think this sounds like some “looney conspiracy theory,” congratulations, that’s exactly how they programmed you to think, you have been brainwashed – your mind has been successfully obliterated. For, the evidence presented on the voxfux.com website is so overwhelming and so indisputable that to ignore it any longer or write it off as too outrageous to be true, is to be a low immoral retarded coward. If you decide to continue reading, prepare yourself to connect all the dots of this evil incarnate. Read on. Your life and the safety of you family depends on it.

On February 7th of 1987, the Washington Post ran an interesting story that did not at first seem to have any particularly national significance. The article concerned a case of possible kidnapping and child abuse, and material discovered in the Washington area that they say points to a 1960s style commune called the Finders, described in a court document as a “cult” that conducted “brainwashing” and used children “in rituals.” DC police who searched the Northeast Washington warehouse linked to the group removed large plastic bags filled with color slides, photographs and photographic contact sheets. Some showed naked children involved in what appeared to be “cult rituals,” bloodletting ceremonies of animals and one photograph of a child in chains.

Customs officials said their links to the DC area led authorities into a far-reaching investigation that includes The Finders — a group of about 40 people that court documents allege is led by a man named Marion Pettie — and their various homes, including the duplex apartment in Glover Park, the Northeast Washington warehouse and a 90 acre farm in rural Madison County, VA.

It was the US News and World Report that would ultimately provide the follow-up to the Finders story, noting that there is a certain Customs Service memorandum that was written at the time of the original investigation, written by Ramon J. Martinez, Special Agent, United States Customs Service, describing two adult white males and six minor children ages 7 years to 2 years. The adult males were Michael Houlihan and Douglas Ammerman, both of Washington, DC who had been arrested the previous day on charges of child abuse.The children were covered with insect bites, were very dirty, most of the children were not wearing underpants and all of the children had not been bathed in many days. The men were somewhat evasive under questioning and stated only that they were the children’s teachers and were en route to Mexico to establish a school for brilliant children. The children were unaware of the functions of telephones, television and toilets, and stated that they were not allowed to live indoors and were only given food as a reward.

A Detective Bradley had initiated an investigation on the two addresses provided by the Tallahassee Police Department during December of 1986. An informant had given him information regarding the cult, known as the “Finders,” operating various businesses out of a warehouse located at 1307 4th Street, N.E., and were supposed to be housing children at 3918/3920 W St., N.W.

Cursory examination of documents revealed detailed instructions for optaining children for unspecified purposes. The instructions included the impregnation of female members of the community, purchasing children, trading and kidnapping. There were telex messages using MCI account numbers between a computer terminal believed to be in the same room, and others located across the country and in foreign locations.

There were pictures of nude children and adult Finders, as well as evidence of high-tech money transfers. There was a file called “Pentagon Break-in,” and references to activities in Moscow, Hong Kong, China, Malaysia, North Vietnam, North Korea, Africa, London, Germany, “Europe” and the Bahamas.

There was also a file labeled “Palestinian.”

One such telex specifically ordered the purchase of two children in Hong Kong to be arranged through a contact in the Chinese Embassy there. Other documents identified interests in high-tech transfers to the United Kingdom, numerous properties under the control of the Finders, a keen interest in terrorism, explosives, and the evasion of law enforcement.

There was also a set of instructions that appeared to broadcast via computer an advisory to the participants to keep the children moving through different jurisdictions and instructions on how to avoid police detection.