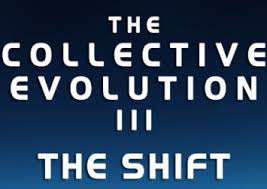 The Film That Proves We Are Living In The Most Important Time Of Human History
By Joe Martino, published on February 27, 2014

For two and a half years this documentary went through the stages of creation and is now released for free on YouTube for everyone to watch. Since ideas first started coming together for this film, I knew it was going to be something special in that it would set out to not only prove that we are living in unprecedented times but that it would engage people in getting involved and embracing the shift that makes its way across the consciousness’ of everyone on the planet.

This film brought much growth, change and experience into my life and am so grateful for the journey that was made possible by all those who supported the creation of this film. Years of travel, research and post production brought together a film we are happy to stand by as it is built to shift, inspire and bring together each and every one of us.

The Collective Evolution III: The Shift

Synopsis:
The Collective Evolution III is a powerful documentary that explores a revolutionary shift affecting every aspect of our planet. As the shift hits the fan, people are becoming more aware of the control structures that prevent us from experiencing our full potential. CE3 uses a different level of consciousness and scientific facts to bring clarity about the shift while dispelling myths about our true nature. It offers practical steps that we can implement right now to transition out of survival mode and into our more natural state of peace and co-operation . CE3 includes fascinating interviews with revolutionary speakers and people who are already opting out of the current socioeconomic system. The film examines hidden technologies and exciting alternatives for a bright limitless future. This is the most exciting time in the history of our world.