The FBI is reopening its investigation into Secretary Hillary Clinton 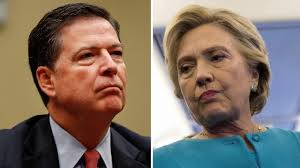 The FBI has reopened its investigation into Hillary Clinton’s use of a private server while secretary of state after discovering new emails – apparently during the probe of former Rep. Anthony Weiner’s sexting – in a stunning turn of events just days before the presidential election.

FBI Director James Comey informed top members of Congress in a letter Friday that the bureau has “learned of the existence of emails that appear to be pertinent to the investigation.”

Comey did not detail those emails, saying only that they surfaced “in connection with an unrelated case.”

An FBI source, though, confirmed to Fox News that the new emails were discovered after the bureau seized devices belonging to disgraced ex-Rep. Weiner and his wife Huma Abedin, a top Clinton aide who recently announced she was separating from the former congressman. The New York Times first reported on the Weiner investigation connection, noting the FBI had been probing texts Weiner sent to a 15-year-old girl.

As Donald Trump and congressional Republicans seized on the FBI’s decision, interim Democratic Party leader Donna Brazile simply tweeted, “Good grief,” after the news of the Anthony Weiner connection broke. The Clinton campaign called the decision to revisit the case so close to the election “extraordinary,” and urged Comey to provide more details.

Comey gave only a brief overview in his letter to lawmakers of what prompted their decision. He wrote that the investigative team briefed him on the information a day earlier, “and I agreed that the FBI should take appropriate investigative steps designed to allow investigators to review these emails to determine whether they contain classified information, as well as to assess their importance to our investigation.”

He said the FBI could not yet assess whether the new material is significant and he could not predict how long it will take to complete “this additional work.”

The move comes after Comey and the Justice Department decided in July not to pursue charges over Clinton’s email practices, saying at the time that the investigation was finished.

Comey later came under criticism from Trump, GOP lawmakers and others who claim the investigation downplayed the mishandling of classified information during Clinton’s tenure.

Trump, speaking to cheering supporters Friday afternoon in Manchester, N.H., praised the FBI for having the “courage” to “right the horrible mistake that they made” – saying he hopes that is “corrected.”

“Hillary Clinton’s corruption is on a scale we have never seen before,” Trump said. “We must not let her take her criminal scheme into the Oval Office.”

In a nod to the significance of the FBI’s announcement, Trump quipped: “The rest of my speech is going to be so boring.”

Other GOP lawmakers also weighed in, urging the bureau to pursue a thorough new probe.

“The FBI’s decision to reopen its investigation into Secretary Clinton reinforces what the House Judiciary Committee has been saying for months: the more we learn about Secretary Clinton’s use of a private email server, the clearer it becomes that she and her associates committed wrongdoing and jeopardized national security,” House Judiciary Committee Chairman Bob Goodlatte, R-Va., said in a statement.

Republican National Committee Chairman Reince Priebus said the discovery must be “serious” for the bureau to investigate this close to the election.

Clinton did not respond to questions from reporters about the development as she landed in Cedar Rapids, Iowa, and did not address the matter while speaking to supporters in the same city.

“Upon completing this investigation more than three months ago, FBI Director Comey declared no reasonable prosecutor would move forward with a case like this and added that it was not even a close call. In the months since, Donald Trump and his Republican allies have been baselessly second-guessing the FBI and, in both public and private, browbeating the career officials there to revisit their conclusion in a desperate attempt to harm Hillary Clinton’s presidential campaign,” he said in a statement.

Podesta said “we have no idea what those emails [that have come to light] are and the Director himself notes they may not even be significant.”

According to a source connected to the Clinton campaign who spoke to law enforcement, the FBI has four devices – one belongs to Abedin, and at least one belongs to Weiner. So far, no classified information has been found on the devices, Fox News is told.

The development comes 11 days before the general election, and is the latest shockwave to hit the race. Clinton had been gaining in the polls over Trump in the wake of the release of footage showing Trump talking about groping women and subsequent allegations of sexual assault and harassment against him which he denies.

However, daily revelations from hacked Clinton campaign emails obtained by WikiLeaks have become a headache for the Democrat’s campaign. The resumption of the FBI probe poses a potentially bigger problem.

Ron Hosko, former assistant director of the FBI, told Fox News in a telephone interview that retired FBI officials were “livid” at Comey over the fact that charges were not brought against Clinton in round one of the investigation.

“He lit her on fire and then walked away,” Hosko said of Comey holding a news conference laying out Clinton’s mishandling of classified information but then not pressing criminal charges.

Hosko said he still defends Comey for not pressing charges because the FBI always has to make a decision “based on what they have” at the time. Hosko said he thinks agents found emails that made them say, “Oh my God look at what we have.”