There is only really the Eternal Now and that Now exists in the beginning and also in the end of the standing wave that we call physical existence and evolution, which means that time is cyclical. The Now is the ‘alpha-omega’ of the cycle – as symbolized by the point where the symbolic Ouroboros snake is biting and swallowing its own tail. However, that Now is also the ‘zero nodes’ in the standing wave, and in all standing waves.

A ‘standing wave’ is a wave of energy that has become trapped between two points: when the travelling wave hits a point where it can go no further, it turns back on itself, becoming a two-way wave of energy-information. 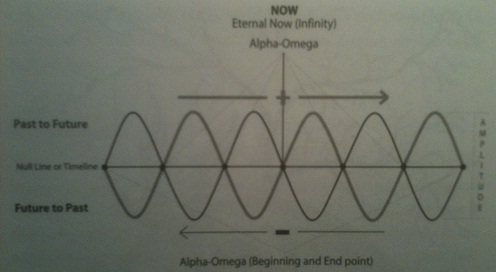 This means that if the Now exists in any and all cycles and standing waves from the macrocosm to the microcosm, then it also means that the Now can be ‘accessed’ at any time along the path of evolution and this means at every instant during the cycles of our own lifetime or timeline.

How does one do this? Well that is what the shaman is attempting to do through sustaining conscious awareness in the hypnagogic trance state (the transition from the waking state into sleep), which can ultimately lead him to reach the point of enlightenment. Within the Now is all the information we need and it is also within us, which is why the shaman goes inside himself.

The Now is simply found within the ‘transliminal phase point’ of each and every cycle, ‘where’ and ‘when’ the positive crosses into the negative, and vice-versa, as in travelling waves, and also the nodes in standing waves. This also means that it surely exists within our own consciousness, which is also cycling – oscillating many times a second – and therefore the Now is really the moments in the cycle ‘where’ and ‘when’ we become unconscious.

The shaman attempts to become ‘conscious of the subconscious’ and in doing so he experiences and becomes the Now – like Jesus, who said that he was the ‘Alpha and Omega’. Of course this is a rebirth, and it is through this kind of rebirth in the Now, and during his lifetime, that the shaman then begins to understand the cyclical process, and how the life-death cycle is really a larger version of the waking-sleeping cycle. By accessing the unconscious in the waking-sleeping cycle via hypnagogia, one also accesses the unconscious knowledge of the life-death process.

As in the waking-sleeping cycle one is often unconscious at the point of death, and if so, then the cycle will repeat, with one having no knowledge of any previous lives, or indeed that one is creating one’s reality and is trapped in the cycles one is actually creating.

However, becoming conscious at the point of death, as one would in the hypnagogic state in the waking-sleeping cycle, one becomes aware, and with full knowledge of one’s condition, and so one becomes an Enlightened Master: sentient, superconscious. Everything collapses into the Now and one can choose either to exit the cycle, or to re-enter it – but with full knowledge of one’s condition, allowing one to create consciously and be able to awaken others.

It is interesting that the Mexican Nagals are called the ‘Now Shamans’, which also remind us of the ‘Present Moment’ associated with the ancient Egyptian god Aker, who like the Roman Janus, and also Baphomet, looks to the past and to the future.

Moreover it could be said that everything we are and experience Now – meaning our very existence in material reality – is being held in balance between these two waves – much as the electron is continually appearing at these wave centres and is held for a moment in time. Of course this phenomenon at the subatomic level, of millions and millions of wave centres, appears as built-up static objects at our level of perception and experience, So again, it could be said that even our very physical existence is at the ‘midpoint’ – but because we rely mostly on our left brain perceptions, which are related to the flow of energy-information moving from past to future, we are only having half the facts.

It should be stated, though, that the information in the future and the ‘goal’ of evolution itself, is not static but can be altered and changed, and that all the possibilities are given to us in that ‘return wave’; we make our choices subliminally based on our internal dialogue, which is why the patterns we experience will tend to repeat and stay the same. Evolution is also a cyclical process of which we are subconscious (female and related right-brain) as well as a linear one, of which we are conscious (male and related left-brain).

It can be seen then that the phenomenon of physical reality – its actual creation at every point in its fabric, and so its very existence – depends on the friction between Yes and No, the two-way flow of energy information we find in the standing wave, and that it manifests and exists in that friction.

Julian Websdale is an independent researcher in the fields of esoteric science and metaphysics, and a self-initiate of the Western Esoteric Tradition. His interest in these subjects began in 1988. Julian was born in England, received his education as an electronic and computer engineer from the University of Bolton, served in a Vaishnava monastery during 2010, and has travelled to over 21 countries. Julian is also a member of the Palestinian Solidarity Campaign.