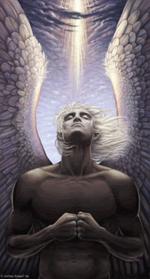 In the material realms, in the lower dimensions of the materials realms, the physical aspects of physical creations must survive and reproduce; that is their primary function as this human personality understands from study in biology, that is the actual measure of ‘success’ for a biologic unit or a species. Therefore the mentality, which is what you ended up terming in this epoch, the reptilian mindset represents simply a focus, an intense narrow focus that is necessary for biological beings – species and individuals — to survive and reproduce and continue and expand in the material realms.

Now unfortunately the perception of that mentality has been seen as bad or negative or undesirable. This is not the case. The case is that this is simply a necessary focus in order for biological units to survive in the lower material realms and reproduce and continue and expand and differentiate.

Now when this mentality in the last recent epoch of your journey came up against the expansive, all-inclusive heart based spiritual cosmic mindset/perception, there obviously developed an extreme conflict, not just in this realm (meaning this planetary system), but throughout the entire galaxy and actually this entire universe, because this is a universal process/project that has been engaged in.

This particular galaxy is the most intense final focus, but this was a project that came directly from Creator and that has lasted millions of years. But the division and the dualistic thinking of dark and light is obviously simply a matter of perception, as they are both part of the Whole. The ‘materialistic’ mindset was necessary for the creation of this realm, simply due to the mechanics.

It was utilitarian, that’s all. What we have achieved over this timeframe (in time, which is also part of the material realms obviously and an illusional creation), is that we now at this moment in what you call time in the place where you call a place — planet Earth and this system — have achieved a balance, achieved the successful resolution of the blend of these 2 perspectives/mindsets/approaches, in order to create an entirely new form of being in the multiverse. What is called the Hu-man race, the new human race, is the manifestation of this blend and the balance of this blend.

This is NOT a simple or easy balance to achieve, or maintain! But as has been shown by you, it is possible, and has come to a successful conclusion, and it is now stored in your genetic make-up (and in other areas as well).

So this physical ascension of planet Earth with all the beings upon it is the end product of an incredible process that has never before been part of Creation. The original purpose of this entire process has been successfully achieved and now ascended humanity, which is what you term it, can now truly begin to enjoy and play and create throughout the Multiverse, in ways that have never before been seen and in ways that will maintain the balance so that the extremism of the paths that were taken during these times will not have to be repeated, and there is a whole new chapter of Creation that will now expand.

It was necessary to achieve what was needed to be achieved as an experiment, as a project, as an exploration, and the exploration did go to the limits of material existence, represented by what you term now in your community as the ‘shadow side’ of human nature. But that ‘shadow side’, to redefine it for you, is simply the dualistic survival mentality, the reptilian type of mindset or focus, taken to its logical radical extreme — which was an integral part of the process. So there will be no more journeys into the labyrinth of the darkness and confusion that has plagued not only human beings but also other humanoid beings for eons and eons, especially in this particular galaxy.

Imagine the amazing creative power of a material-realm/survival mentality blended with a clear understanding of universal abundance, tempered and balanced via the full-time awareness of Unity Consciousness. With the assimilation of Unity Consciousness, the infinite creative expansion of our playground called the Multiverse, and its en-JOY-ment via limitless adventure – but sans the pitfalls and dead-ends experienced prior to this Project’s completion — is now available to and for ALL!

–The Elohim, transcribed by Azar