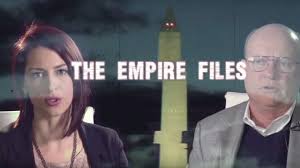 Abby Martin interviews retired U.S. Army Colonel Lawrence Wilkerson, former national security advisor to the Reagan administration, who spent years as an assistant to Secretary of State Colin Powell during both Bush administrations. Today, he is honest about the unfixable corruption inside the establishment and the corporate interests driving foreign policy.

Hear a rare insider’s view of what interests are behind U.S. wars, the manipulation of intelligence, the intertwining of the military and corporate world, and why the U.S. Empire is doomed. http://multimedia.telesurtv.net/v/the…

1 Comment to “ The Empire Files: ‘This Ship is Sinking’ Says Former Bush Official”