The debate regarding the impact of the human population on the world around us has been an ongoing one, reignited each time we witness a significant shift in the climate or the environment as a whole. In fact, this whole situation has become so commonplace in our society that it no longer phases us the way that it should.

A perfect example of this level of complacency is the recent string of major earthquakes that are rocking our world. One would like to think that the occurrence of a major earthquake would quickly be known throughout the globe, the events making headlines and shocking our nation. However, over the course of a single week, we saw a total of 144 major earthquakes, a startlingly high number.

The phenomenon is occurring along a horseshoe-shaped active seismic belt called the ‘Ring of Fire’, an area that runs around the edge of the Pacific basin. The area is well known for a large number of volcanoes and earthquake epicenters, due to the fact that it runs along the boundaries of the planet’s tectonic plates. In fact, most of the world’s strongest earthquakes, and 75% of the world’s volcanoes are all located along these fault lines. 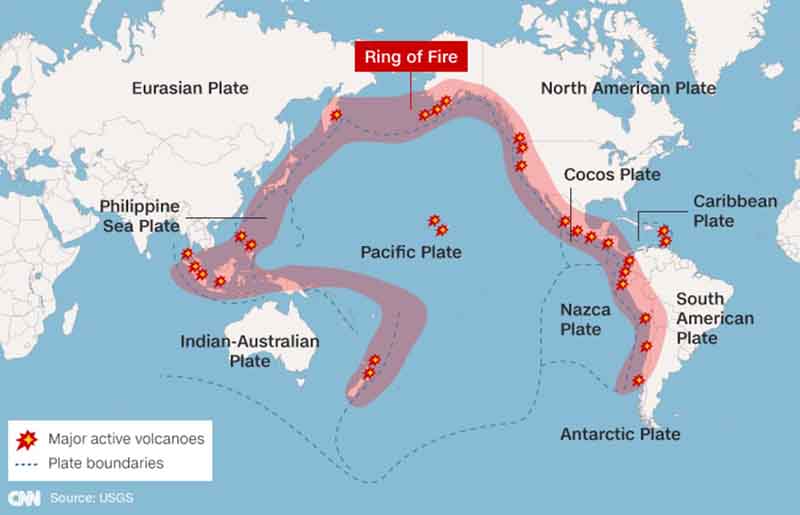 However, despite the high level of activity that regularly happens here, we’ve never seen anything like the recent events. In order to be considered a ‘major earthquake’, that means that each of these earthquakes exceeds a magnitude of 4.5. These aren’t minor tremors. These are major events with the potential to dramatically alter the lives of those that they impact.

Of these 144, there are two specifically that stood out. Early in the week, a magnitude 8.2 earthquake was recorded in the Pacific Ocean, just 174 miles northeast of Fiji’s Ndoi Island. Miraculously, reports show that there were no causalities or damages from the quake due to the fact that it occurred so deep below the planet’s surface. Then, just days later, a 7.3 magnitude earthquake hit Venezuela’s northeast coast. While there were reports of minor damage, once again we were lucky to see no casualties. However, this earthquake was a particularly frightening experience for locals as it was the largest to hit the area since 1900!

British seismologist Stephen Hicks explains, “M7.3 earthquake today along the northern coast of Venezuela is one of the largest ever recorded earthquakes along the boundary between the Caribbean & South American plates. There was a M7.7 quake to the west in 1900 but this will have preceded detailed instrumental recordings.”

It has long been theorized that earthquake activity along the Ring of Fire is like a game of dominoes, with one event leading to another and another… continuing to rock the area. This leaves many wondering, where is the next major quake going to hit?

Included in the Ring of Fire is the west coast of the United States. While the area is part of the high activity zone, Americans have been lucky to be experiencing very little activity in the area. But, is this ‘dry spell’ possibly coming to an end? Are we due for a devastating hit?