The Eagle and the Condor are uniting…

The Eagle and the Condor are uniting… 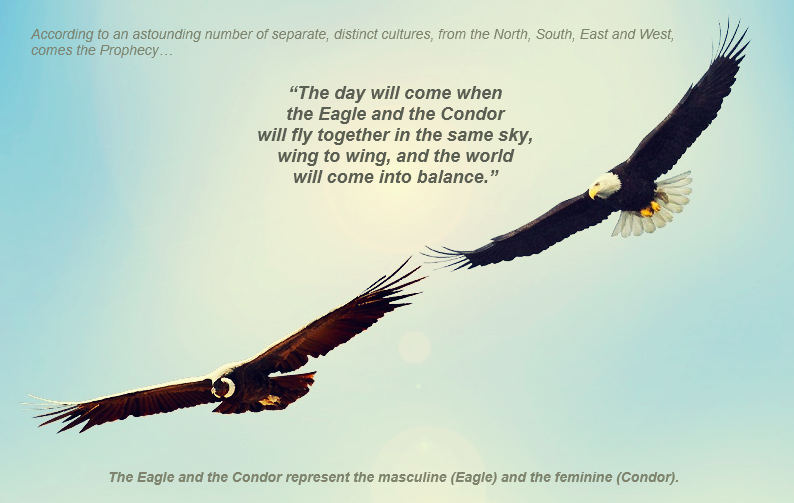 “We have been waiting five hundred years. The Inca prophecies say that now, in this age, when the eagle of the North and the condor of the South fly together, the Earth will awaken. The eagles of the North cannot be free without the condors of the South. Now it’s happening. Now is the time. The Aquarian Age is an era of light, an age of awakening, an age of returning to natural ways. Our generation is here to help begin this age, to prepare through different schools to understand the message of the heart, intuition, and nature. Native people speak with the Earth. When consciousness awakens, we can fly high like the eagle, or like the condor.”– Willaru.

As the shift moves on within all levels I can just say that the energies are more than insane atm. I know this is connected to the current places of the planets and the Sun in our Galaxy as well as other things. Remember everything is connected.

In our outer waking reality I noticed things moving both on personal level as well as on Global levels. It’s like zooming in and out. The perspective is of course different for each and everyone but let’s take a look at some things.

The US is loosing badly in Syria so are the Saudis in Yemen who are also thrown under the bus by the US! Israel is fairly quiet atm but something is cooking over there since Daesh all of a sudden are aiming at them?? Isn’t very strange that Daesh has been avoiding confrontation with the greatest “enemy” of the muslim world the Israelis up to this point? Not a word in Mains Stream Controlled Media of course.

The US is also currently ramping up it’s alleged bad boy game towards Russia and China by provoking them both i.e. Russia vs Nato and it’s exspansion with the new missile defence in Romania “aimed” to counter Iran or Daesh???? Yeah, right.. how stupid do you think people are?

A Turkish MP has put forth tons of documents stating the wareabouts of Daesh people in Turkey without the Turks doing anything about it.

So the Middle East take over of 7 countries in a couple of years is failing badly for the US so again lets divert the attention else where shall we?

China is provoked in the South China Sea by some disputed Islands contended by the US. The US is also stirring up turmoil in Brazil by removing Dilma Rousseff and putting in a former central Banker in immediate power (Henrique Meirelles) amongst other things while also stirring up things in South Africa. 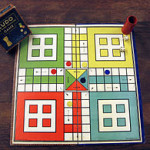 Something I’ve learned these years is to look at the timing of events no matter if they are on a personal or on a global level.

You can bet your horse there is something fishy going on here, we also have the unrest in Venezuela that has been going on ever since Huge Chavez died in cancer. You just can’t make this stuff up.

In the midst of this we have wild fires raging in Canada and in Sweden. Talk about cleansing.

On a personal note the cleansing is ongoing and vibratory frequencies are shifting with old programs being released, it almost seems like it will never stop and in constant move. There are things coming though that will ease up things though.

Sometimes life feels like a game of LUDO, your standing with you token at the door to the nest but your kicked right back to the start and have to run the course all over again, always comming back the the “surrender” square!

Getting small pieces of insights everytime thinking “hey where is the bloody shortcut”?

There is an old Indian prophesy talking about the Eagle and the Condor uniting, where the Eagle represents the masculine brute force and power and the Condor the gentle feminine compassion. You see the quote above. The times for this union are actually here right now this is why we see so many whistleblowers and “stupid” moves by the alleged power elite. It is for all to see how screwed up things are! Just see the Hillary Clinton E-mail scandal along with her doings with the Bengazi debacle.

Also see the TTIP deal together with the chaos around the world and you understand that these things just has to be exposed.

The Eagle power house almost destroyed everything with it’s industrial complex baby, it has to meet the more gentle Condor though in order to unite. LIGHT is information and with the internet we have information overload.

So hang in there folks be kind gentle and love your fellow human as much as you can and we’ll finally will experience Heaven on Earth.

3 Comments to “ The Eagle and the Condor are uniting…”