The Djinn (Jinn) and Their Connection to the Shadow People

The Djinn (Jinn) and Their Connection to the Shadow People 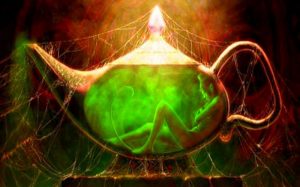 In early Arabian and Islamic mythology and theology, Djinn (Jinn) are supernatural creatures. According to the Quran and certain ancient records, the Djinn were created from smokeless and scorching fire. An individual member of the Jinn is known as a jinni, djinni or genie. In the Western world, Djinn are sometimes referred to as demons. According to Rosemary Guiley, author of The Djinn Connection, one of the many forms of the Djinn is the Shadow People.

I personally had experienced encounters with the Shadow People, a group of humanoid beings that like to hide in the shadow and often appear as shadow figures. When I was a child, they would often appeared in my bedroom and harassed me when I was in the process of falling asleep. It was not until my late 20s that they stopped appearing in my bedroom. I felt that one of the reasons why they stopped harassing me was because I did not fear them anymore. Furthermore, I became more aware of how to exercise my natural rights and spiritual powers.

Based on my experience, the Shadow People had very negative vibration. Sometimes, their vibration was so negative that when they appeared beside my bed, their energy paralyzed me, making it hard for me to stay calm and breathe.

My experience with the Shadow People helped me to discover some effective methods for preventing negative entities, such as Djinn and demons from harassing me. One method is to not fear them. An even more effective method is to not be afraid to exercise your natural rights. One of your most powerful natural rights is free will. When negative entities harass you, tell them to stop or face the consequences of violating your free will. The Universe has its own law system, so do not be afraid to use the law system of the Universe to enforce the power of Natural Law.

If you have a hard time believing that Djinn, demons and supernatural creatures exist, read my shocking article titled Demon Magicians: Are Most Great Magicians Possessed by Demons?

The following videos have a lot of interesting information about the Djinn. Intuitively, I sense that there is a good amount of truth to the information in the videos. However, is all of it true? Watch the videos and decide for yourself.