The Darkness On Earth Is Lifting 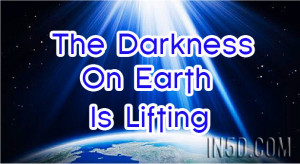 The Darkness On Earth Is Lifting

Ever since the civilizations of Atlantis and Lemuria were destroyed and consciousness fell, darkness has continued to take over this beautiful planet of Gaia and has kept humanity “asleep” and enslaved for eons of time. The Darkside has several names such as: Archons, Illuminati, Cabal, Draconians, Reptilians. They are indeed lower-level dimensional energy beings who chose to turn away from the light and the divine so long ago. As a result of their decision, they were cut off from receiving vital life force energy from Source, in the hopes that without the important infusion of life sustaining energy gifted by our divine creator, their existence would surely “fizzle” out and they would have no choice but to return to the light and surrender.

However, the darkside figured out how to maintain their life force and were able to exist for eons of time, walking amongst humanity. Through the instillation of fear, anger, aggression, sadness, and grief to those inhabiting Earth, they were able to receive life sustaining energy off of their hosts that they attacked energetically. They became very good at manipulating others and introduced several means to keep this trend going. They kept all of “us” under thumb by making sure we would never remember our soul divinity and purpose. The human race never stood a chance to elevate in awareness and consciousness as long as these dark beings created illusions for them to believe in. While the battle with the “Light VS. dark” continued on other realms in higher dimensions, over time, the Earth souls became more and more lost with each incarnation and continued to weaken.

With the “Cosmic Law of Free Will” in place, the outside Light forces were unable to directly interfere in order to protect Earth and humanity. Although we are being told that “the Light” had won the battle in the higher dimensions, it was necessary for Lightworkers to incarnate at this time to fight the energetic battle in the lower dimensions, here on Gaia. We are here to help uplift humanity and assist in elevating the collective consciousness, so you can become a free soul once more and recognize your divinity as the magnificent soul essence that you are, but have long-since forgotten.

The darkness is beginning to lift its long term grips here, and we are able to see the sun’s light piercing through the dense cloud covering. It gives us all hope and determination to keep fighting and moving forward in this energetic battle. Please be aware that as you release the old patterns and belief systems from your field, things may seem painful and chaotic with this heavy purge from your heart. It is necessary to release everything that contained you in the lower frequency and vibration. The more you let go, the lighter you become, and will begin to elevate. Do not fear the darkness. Just remember that you are strong and can triumph over anything and everything placed in your path. Be aware and conscious of holding onto negativity. Go with the flow as best as you can.

Make sure to visualize “white light” around you daily. Ask God and the Angels for protection.

We are picking up speed and strength now as the last remnants are being healed from our battle-worn bodies. We don’t intend to fail, we are here to prevail!

About the author: Adeana M. Slater is an Empath and Lightworker who enjoys to write spiritual and inspirational articles in her free time. She is a single mother of four children and full time Registered Nurse.