The Corporatization Of Your Media – Dan Rather Speaks Out 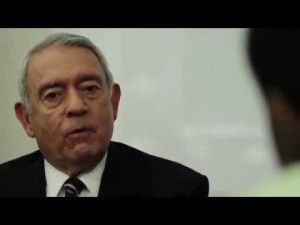 The Corporatization Of Your Media – Dan Rather Speaks Out

Taped Aug 24 2012: Dan Rather speaks out in a candid, one-on-one interview with The Guardian’s Gary Younge in which he reveals the disturbing truth about the corporatization of mainstream news media, the corruption, how deep it runs, how it is signaling the demise of true investigative journalism, and WHY YOU SHOULD CARE.

DR: “What’s changed is that.. any reference to public interest has just about disappeared. And that’s a signal change. That’s a big change.”

GY: “Do you consider that a violation of the public trust?”

DR: “I do. I do consider it a violation of the public trust.”

DR: “What’s happened in the banking industry, in the insurance industry, the health care and hospital industry.. has also infected the news industry. Which is today, having said, that any talk of operating a news operation as a public trust has all but disappeared.

That.. and I’m pausing only because.. I apologize, for this language is necessary.. VERY BIG business is in BED with BIG power in Washington.. for ‘their’ mutual interest, not in the ‘public’ interest.. in ‘their’ interest. The large conglomerates who operate on a worldwide basis and for whom news is only a very small part of their overall business. Consolidation of media in this country has reached the point where, no more than six.. my count is four, of these conglomerates control something more than 80% of the true national distribution of news in this country.

Now that’s important because the leaders of these very large corporations, they have business that they want out of the powers that be in Washington.. whether Washington be led at any given time by Republicans or Democrats. And of course, those in power in Washington want things from the leaders of the corporations. They’d like to have sweetheart coverage, at the very least they don’t want reporters mucking around, digging deep and exposing malfeasance, if not something worse.

So, that’s the point we’ve reached today and, yes i do think this is a violation of the public trust, and i do think it’s important not just for journalists and journalism, but for the public at large to understand what has happened, why it has happened and why they should care about it.

…an example would be, that in the case one of the large American networks was until very recently, owned by a company that did a lot of the defense contracting business. A huge part of their overall corporate business. They were competing for contracts. They certainly did not want any deep digging into how contracts were awarded.. and you saw very little coverage of that. In fact, almost none.”