The Chair of Saint Peter:’There Isn’t a Bankruptcy’ in Detroit Because All Global Debts Have Been Erased 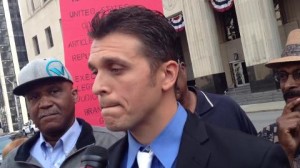 There was a mixture of retirees, Detroit residents and community activists objecting to the city’s bankruptcy filing Thursday.

Then there was Robert Marques.

In the most unusual argument presented during the U.S. Bankruptcy Court hearing, Marques testified that he was there as a representative of “the Chair of St. Peter” — as in the Vatican.

Marques of Ohio said all of Detroit’s debts were wiped out on June 30 as part of “global debt forgiveness.”

He acknowledged that his legal arguments are unique, but insisted that they are based in fact. He also warned that anyone who doesn’t follow the orders from the Chair of St. Peter could be held accountable for war crimes.

“The City of Detroit, which is a legal fiction, is basically saying there is a bankruptcy,” Marques said shortly after he testified during the bankruptcy hearing. “The problem that most Americans don’t realize is there isn’t a bankruptcy. For one reason: All the world came out of global debt on July 1, 2013, when Iraq sanctions were lifted.”

Marques, dressed in a dark suit and a white tie, was among about 50 people who spoke during the hearing because they filed objections to Detroit’s bankruptcy by Aug. 19. U.S. Bankruptcy Judge Steven Rhodes held the hearing to give retirees and concerned residents a chance to speak.

The Chair of St. Peter is an actual chair that is housed at the Vatican in Rome and is believed to be a chair that was actually used by Peter, a disciple of Christ.

Marques, or his organization, filed a 21-page document with U.S. Bankruptcy Court on Aug. 19 and mailed the same document to a number of local Catholic parishes.

The document arrived in a large envelope with a picture of the city skyline emblazoned on it, said Ned McGrath, director of communications for the Archdiocese of Detroit.

McGrath sent out an advisory to all of the Detroit parishes to alert them to the document.

“To overstate the obvious, I would not encourage any contact with this individual and/or his website,” McGrath said in his advisory to the Catholic parishes.

Marques said he came to Detroit to inform the judge and Detroit residents that the city should not be in bankruptcy.

“We are not here to argue these points. We are here to state them in fact,” Marques said.

In court, Rhodes nearly had Marques removed for reading directly from the document he had filed and for going over the three-minute time limit.

Afterword, flanked by about a dozen followers, Marques declined to say where he lives or how many people belong to his organization.

He also repeated his warning that if the orders of the Chair of St. Peter are ignored, there could be consequences.

“If they do not respect that decision they will not fall under the authority of Roman Curia as public officials as will be held for war crimes and crimes against humanity,” Marques said.

20 Comments to “ The Chair of Saint Peter:’There Isn’t a Bankruptcy’ in Detroit Because All Global Debts Have Been Erased”