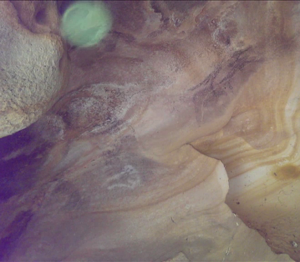 As I noted in an earlier Wake Up World article, a huge and rather tragic bushfire in the Blue Mountains region of NSW recently created easier passage through, and access to, all manner of archaeology in the area. As the silver-lining to otherwise dreadful circumstances, this opportunity allowed my team and I to seek out two of the many sites referred to us by Austrian archaeologist Klaus Dona.

The first site showed every indication it was exactly as Klaus described, and for now what we discovered is a work in motion and needs to be kept under consideration and in secret. But not so the second site; it demands a public ear.

With map in hand, it wasn’t difficult to find this cave of immense power and great importance. As we approached with Wake Up World founder Ryan Mullins at the helm, he was the first to sight a brown owl flying out of the far left hand recess of the cave. Years ago, such a presence might not have peaked my interest, but our ongoing work with the Original people and the sacred lands of Australia has taught me; when we go onto country in search of ancient archaeology, we are often witnessed and guided by nature and the spirits – just as we were guided by eight hawks at the Elders’ behest when we visited the site known as “Australia’s Stonehenge” a few short months ago:

Initially, three hawks came as summoned. But as appreciative as the Elder was, he called for more. A fourth, then a fifth bird joined the procession… He asked for six… then seven… eight… and finally, eight hawks circled above their heads. There is no question – the omen from above was Heaven-sent.

On this occasion, as auspicious an omen as the appearance of the owl was, it was multiplied ten-fold when team member Evan Strong picked up the feather the owl gifted us as it departed. 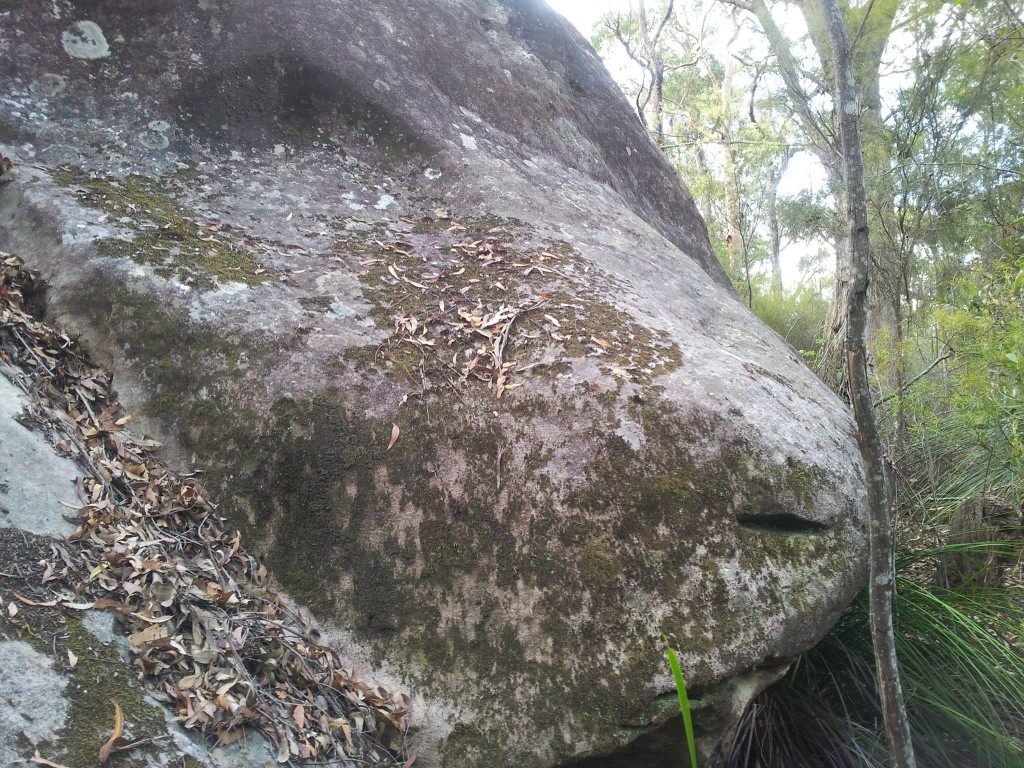 The entrance to the cave is shielded by a rather intriguing and somewhat familiar rock formation that resembles a dog face, and a little further on are indications of a rock formation that bears hints of an artificial wall. On the protruding ledge are four Dialanthuns (Dreaming Track markers) which accentuates the significance of what was, and still is, within this shallow cave.

To begin with, neither of the two hand stencils painted on the back wall made complete sense. The smaller hand outline was created by blowing ochre through the mouth and is the size of a child’s hand with one exceptionally thin finger. The second larger white ochre stencil is even more problematic, in that it wasn’t so much a hand stencil but more an elbow-to-finger stencil. If its creation was a solo effort, this would be a very difficult assignment, and the result unlike nearly all other Original hand stencils which highlight just the hand.

Close to where the owl was roosting are two sets of faded paintings; both seem to show five red ochred rays radiating out of what appears to be heads. All around are the remains of white ochre, which was probably all part of an original painting that included both heads. Just above the owl’s roosting place are two black charcoal figures of the same form. Both have two legs, possibly a penis, and one body has two arms raised above the head. To the right is a very unusual engraved curved line surrounded by another charcoal figure that is difficult to identify, beyond tentatively suggesting it could be an animal.

There is also evidence of pecking (an Original method of stone carving) and in one location it appears a large section of rock could have been pecked, abraded and removed. What appears to be a series of parallel chisel marks can be found above the line of peckings. Then there is also what appears to be an odd type of blue-lime algae coating some rocks on the far left edge of the cave.

We had spent an hour or two in research and deep respect, and there didn’t seem to be any reason to return. This cave, bearing Original artwork and engravings, is certainly very sacred and special. But for our purposes we found no archaeology outside the norm and nothing that really pushed our barriers of understanding.

A hundred metres downhill we paused to eat and, more importantly, relieve myself of the leech which (inevitably) had attached itself to my ankle. During that quick break Evan took the chance to check what he had photographed at the site. Throughout our investigations Evan had remained on task, taking still photographs of the ochre, charcoal, walls and surrounds…. or so he thought.

To his complete surprise – and apparently due to either a wonderful accident or divine intervention, or both – Evan had on one occasion pressed the ‘video’ button instead of the ‘camera’ button on his recording device. This error occurred at the same place the owl flew from when we first appeared on this scene, and where owl droppings still remained.

What we saw was beyond any expectations: a pair of orb-like white lights flying diagonally across the screen.

Any plans we had to look elsewhere that day immediately vanished. No discussion was needed, and we were back on site and in the cave within a minute of our first viewing. What we had seen just doesn’t belong to any conventional theory of the ‘here and now’. And it was certainly worth further investigation.

It didn’t take long, barely seconds after Evan began filming again, before we first saw a ball of light flash across the screen. For the next two minutes, the intensity and number of lights ebbed and flowed, but from the very beginning we noticed one stark difference in the flight path from what we had seen in the first video: they went everywhere! These light objects moved in every possible orbit, straight, diagonal, horizontal, curved, and in one case a J- shape. The speed and intensity of lights ran the full gamut, as did the range of colours of these energy balls. Some change speed or direction mid-flight. There was no uniformity to their motion, and thus no single force propelling them.

Had we just captured flying Orbs on video?

Amongst all these apparently supernatural apparitions, one very brief participant stands out. It bobbed down into the top of the frame and made the briefest of appearances, totalling three frames, but without doubt it was the largest of all the light forms filmed in Evan’s record of this parade of energy and light.

Throughout this filming however, all three of us saw nothing with our own eyes. If it weren’t for what we saw on the screen, we would have had no idea of such goings on around us. Evan was focusing the camera on one location deep within the cave. The sun’s rays had not reached the ledge of the cave let alone penetrated the cave itself, there was no dust or insects visible, and no ‘rational’ explanation available that could dismiss this hidden state of ethereal affairs – which appeared vividly and unmistakably on camera.

As graphic and verifiable as Evan’s video appeared, we knew more was needed to satisfy the critics and cynics both in and outside our team. So four hours after we left the cave, Evan returned with team members Sonya Vangelder (researcher/historian) and Sean Vandenberg (intuitive/documentary producer). This time, with two different cameras – one held by Sean who is a professional and extremely gifted film-maker – filming at a different time of day, the team chronicled more of the same light energy at play. There were moments when the screens were awash with dozens of light forms dancing at varying speeds, intensity and orbits.

Amongst all the wonder of these signs from the Gods was what we believe to be a defining point; from that moment on it became apparent we were dealing with entities of intelligence, quick reactions and conscious thought. Sean had crept closer to the source than where Sonya was standing or where Evan previously filmed from — perhaps even a little too close for the light ‘beings’ present. In one segment of film, Sonya focused around Sean’s arm and one orb, apparently destined to collide with his wrist, changed course within an instant, veering 90 degrees then running up and alongside his arm in an action that appears solely to avoid making ‘contact’.

This interaction spans many levels. Whatever these lights are, when you get too close to one of their kind they seem to employ a cognitive process to predict and react to your physical presence. In this case, the light selected an alternative path to avoid the flesh and blood of Sean’s arm. And yet none of us had the eyes to see any of this.

Of course, in the empirical world many cling to, or are forced to reside, it is not enough to trust the words of others. As they say, “seeing is believing”. So to accommodate the “what you see is all there is” sensibilities of our world, Sean has compiled a short documentary of our experiences inside this special cave.