BZ: all is not as it seems… look at this without “political passions” for a moment and at the absolute data… Could you walk 75 miles a day, with no fresh food or water, stay clean and well groomed, and rosy cheeked for the camera? This is what they are walking to travel the 2, 500 plus miles to get to the US border before the mid terms. Bob’s slant on his article may be a little crass for some, but its a really good logistics question… and when you stop to ponder on that a whole lot more questions bubble up and you see very quickly a picture may be worth a thousand words, but those words are clearly describing something very different than is being portrayed. 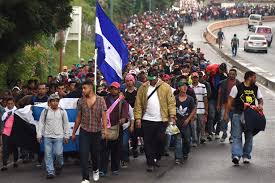 Where do they shit?

The Hondurans in the caravan, the 7,000 people walking north to America, where do they go to the bathroom?

And eat and sleep and store their clothes?

And how is it that after a week on the road they are clean and their hair and clothes are well kept?

How is any of this possible?

And why do these people, supposedly fleeing intolerable conditions in their homeland, carry little flags from their homeland and break into its national anthem when the TV cameras show up?

And speaking of which, for oppressed people, they all seem to be pretty well fed, well groomed and well dressed. Their hair is neat and newly cut, their clothes are clean and in good repair, and they are built like people who have had ample nutrition all their lives, being well developed and, many of them, overweight.

And none of them look dirty or unkempt, like they had been sleeping on the ground for the last week.

There’s just nothing in any of this that makes sense.

Supposedly, these several thousand people spontaneously decided to leave Honduras, walking north in a group, hoping to trek the length of gang-plagued Mexico and present themselves as refugees and prospective Democrats at the American border.

Which, again, makes no sense whatsoever.

And leaves a lot of big questions unanswered, and ignored by the press. Such as, who organized this? Who is paying for it? How have they covered 500 miles in a week?

Seriously. Any number of American “reporters” have walked beside a sympathetic walker and talked about how this particular woman and her children had trekked half a thousand miles over the last week or so.

The best soldiers through history have been able to march 25 miles a day.

How have 7,000 people been fed and watered? And how have they gone to the bathroom? If the average person across the world produces about a pound of solid waste a day, that means that these folks are somehow disposing of more than three tons of feces each day.

That’s a heck of a lot of crap, even for a Central American roadway.

Provisioning such an army of people – the equivalent of 10 combat battalions in most of the world’s militaries – is a large task. Transporting and distributing the food and water necessary to keep those people moving is a massive chore which the press says nothing about.

The entire enterprise, as a spontaneous ad hoc event, is implausible.

As an orchestrated international attempt to influence an American election, it starts to make sense.

And ought to alarm us.

Unless it’s only Russians we don’t want screwing with our democracy.

Unfortunately, none of this has made the evening news. It’s almost as if the press, in whatever scheme is afoot, gladly accepts its role as propagandists to the American people.

Every story is sympathetic, as if an attempt to enlist viewers and readers in this caravan and the politics it symbolizes.

And so the story is not about an orchestrated attempt to manipulate electoral opinion and violate the borders and laws of the United States, it is about compassion and Trump and xenophobia and racism. It is the October surprise, it is the Blue Wave.

And it is all nonsense.

Because all of these people, if legitimate, have the ability to apply for American asylum in their own country – as do the residents of most nations of the world. We have consulates and embassies for a reason, and this is one of those reasons.

We also have laws and an oath of office for a reason.

Breaking the law is denying you the vote. Your vote elects representatives – lets you pick the country’s direction – and the representatives write the law. If that law is ignored, your representation becomes meaningless.

And the oath of office?

Members of Congress – even Democrats – swear an oath to “bear true faith and allegiance” to the Constitution, which establishes our system of laws and specifically charges the Congress with making the rules of naturalization and immigration.

Who comes across the border and under what conditions they can stay is a constitutional responsibility of the Congress. That is to be determined by a congressional vote, not by a Honduran mob.

Failure to insist on that – even for Democrats – is a violation of your congressman’s oath of office.

So there is not a Democrat or Republican response to this travelling army of invaders – there is only an American response.

And that is: Turn around and go home.

Because the law of the United States does not allow a mass entry like this. The law does not declare the borders open.

If Democrats and progressives don’t like that, they can try to change the law. If America’s progressives want open borders and believe all the world’s people have a right to live in the United States – as they say they do – then they should adjust immigration law accordingly.

But until then, if they are to keep their oaths of office, they must stand for the law and the border.

And they must tell their surrogates to turn around and go home.

Because this caravan is nothing more than a bunch of political shit.