The bomb that went off yesterday that you probably didn’t hear.

This is a silent war. Silent but deadly. With real threats and real casualties. And sometimes, you can see the traces of the deflagrations:

Q158 Silent war (some gets out). The Great Awakening. Iron Eagle. Godfather III. The Hunt for Red October. Q

If you want to know what is going on the battlefield, you need to learn the comms and pay attention:

For many reasons, the Maestro and Q cannot share the truth with us in a direct way, they have to code the news from the battlefield:

Q2712 Why must we communicate this way? Think NAT SEC laws. Q

As you may know by now, Q is extremely nuanced. This “NAT SEC laws” has a double meaning. Besides the regulatory perspective, there are also the laws governing social peace and preventing us from experiencing a mass panic.

Q22 Biggest drop to ever be provided on Pol. Study and prepare. The masses tend to panic in such situations. No war. No civil unrest. Clean and swift.

This drop is proof the Maestro and his troops are going to take out the Cabal silently, elegantly, and mercilessly. Popcorn for those who can see.

To know what happened yesterday, you need to take a close look at the Maestro’s tweets. He posted 5 tweets, distributed in 6 drops and finished the day with one re-tweet from FLOTUS. I will list the tweets for you in the following image. Img1 Read them very carefully, then think about what you read for a minute and take a step back to try to see the big picture. Will you be able to crack the code and see which bomb exploded?

Let’s apply the usual method I showed you to extract the Maestro’s hidden message: we will first decode each tweet by finding the coded message corresponding to the gematria value of the capital letters. To do that, we will use the Q drop identified through the tweet DC military timestamp to find the context and narrow the list of possibilities. Then, we will gather the pieces of the puzzle and extract the general coded message.

Piece of the Puzzle 1A

Img2 The timestamp is 8:55, we go to Q855 and the first lines read 1 of 5, then 2 of 5 and are separated by a number. Coincidence? The Maestro is saying he is going to post 5 tweets and this one and the next one, put together, should be considered as the first tweet. Hence the suspension points. Then, going to the nitty-gritty, there is a clear reference to America being sold out by their treasonous political leaders and that HRC’s victory would have been the nail in the coffin. In the simple Gematria system, the capital letters add up to IGGUSIAT=93=CYMATICS video. The principle behind cymatics is to alter matter geometrical shapes through frequencies. If you apply this at the biological cellular level, imagine all the things you may be able to do… Peruvian Coffee for those who noticed that we should consider the Jewish Gematria value of 558! This number is the timestamp 8:55 read from right to left which is exactly how Hebrew is read. With this clue, we are told we should use the Jewish Gematria system. We find: IGGUSIAT=558 (in English Gematria)=THEY FAILED (in Jewish Gematria). We can now extract the decoded message for this particular piece. Read very carefully.

Piece of the Puzzle 1B

Img3 The timestamp is 8:59, we go to Q859. The weak spec steel import model is confirmed with the Kobe Steel scandal but there is more: do you see this ‘people’ broken by numbers adding up to 34=32+2? This symbolizes the programming and control of people by secret societies like Skull and Bones through the use of frequencies as confirmed in Q772. The capital letters add up to IUSW=72=DISCORD. You got it, we are talking about mass zombification of America, persisting division and social unrest. Read the decoded message.

Piece of the Puzzle 2

As you can see, the picture shown about 5G is pretty somber right? Then why would the Maestro tweet he wants 5G and even 6G as soon as possible? Answer: because the wall is being built!!! America is now ready! Do you see it?! He tweeted about the wall R=18 minutes after talking about 5G. Why? Because it’s Related! BOOM! The bomb has just exploded: the wall is also about protecting America from the harm of 5G! So you thought the largest Military Spending Bill of our history was only about building a physical wall at the southern border? You thought everything we know and talk about regarding 5G and how it can harm humans was going to be overlooked by POTUS?

The wall is about protecting us from ALL TYPES OF WEAPONS AND ARMIES FROM ALL DIMENSIONNS that were gathered by our former treasonous political leaders in order to weaken us, enslave us and invade us.

Q1009 The WALL means more than you know. The FIGHT for the WALL is for so much more. Q

How do you protect the American People from a tangible threat without causing a mass panic? Regulation? You don’t have time:

Since Trump’s election, hundreds of billions of dollars have been quietly invested in R&D in the most advanced fields in biology, technology and military warfare to protect America and correct its course. Under the Maestro’s command, our most brilliant minds have been working behind the scenes to build an integrated set of protections to shield us from the various types of threats that were identified. This integrated set of protections is what the Maestro generically called: THE WALL.

If you think about what I have just said, you will see the wall for the Fake News is QANON!

Now that I have revealed this amazing secret to you, the rest of the decoding becomes almost trivial. Let’s finish it. Try to get ahead of me this time.

Img4 The timestamp brings in Q917 where, projected in this decoding context, a parent is worrying about the safety and health issues related to 5G networks. The answer is in the capital letters adding up to 456. A big load of Peruvian Coffee for those who noticed 456 is a multiple of 6 and is therefore eligible to the English Gematria system and that we should consider it. Why? Because this is why the Maestro said “and even 6G” in the first tweet: since G=7, 6G can be written 67. Take its mirror (76) and multiply it by 6. What do you get? Yes, 456. What does it mean? It means the Maestro is answering to this parent with 6 different matches for 76. Here they are: HIDDEN AGENDA, PAIN REAL, THE PLAN, LIBERATED, SAFETY, HEAL AMERICA. Notice the length of the wall construction video in the tweet: 23 seconds. This is the Trump/Q dynamics I told you about in previous posts and confirmed by the “revealed” password in Q1415. The Maestro puts it here to show the 322/32 Skull and Bones dynamics we saw in the previous message is reversed by THE WALL and neutralized.

Img5 The first tweet refers to the recent Jussie Smollett scandal. The capital letters of the first tweet add up to 73=BIPOLAR, which is confirmed by the capital letters of the second tweet adding up to 293 and equaling THE ACTOR IS LOST IN HIS ROLE=293. The timestamps bring in Q1109 and Q1510 where we learn this mass confusion illustrated by the Smollet example is engineered by the Dems and their puppet masters through technology, evil and corruption. We get the confirmation California/Hollywood is their HQ and experimenting platform. This allows us to extract the decoded message.

Piece of the Puzzle 5

Img6 The timestamp is 7:27PM, which is 19:27 military time. We go to Q1927 where we find the lines about subversion and National Emergency. The capital letters add up to 124, value for REVERSE FATE. Read the decoded message.

Piece of the Puzzle 6

Img7 Amazing re-tweet by POTUS. He re-tweets a tweet from FLOTUS. Look at the timestamp: 8:55PM. It therefore points to Q2055 which brings the general idea of outstanding expertise and competence that I told you about in piece of the puzzle 2. You thought everything I told you about our brightest minds quietly working to build THE WALL was me guessing? No. I took it from this re-tweet. But there is more. Remember, POTUS tweeted his first 5G tweet of the day at 08:55 AM. FLOTUS tweeted this uplifting message at 08:55PM. Coincidence? Do you see the Cosmic Dance I am seeing? Close your eyes… Expand your thinking… video. The Maestro is essentially saying: “the darkness they wanted to plunge America into has been reversed. With 5G, the Enemies of America wanted to kill us with our children but I put our brightest minds to work. I have built THE WALL and we are now safe. You wanted 5G? HAVE FUN!”

Do you now see THE WALL?

And for our digital warriors out there, here is the complete decoded message: Img8 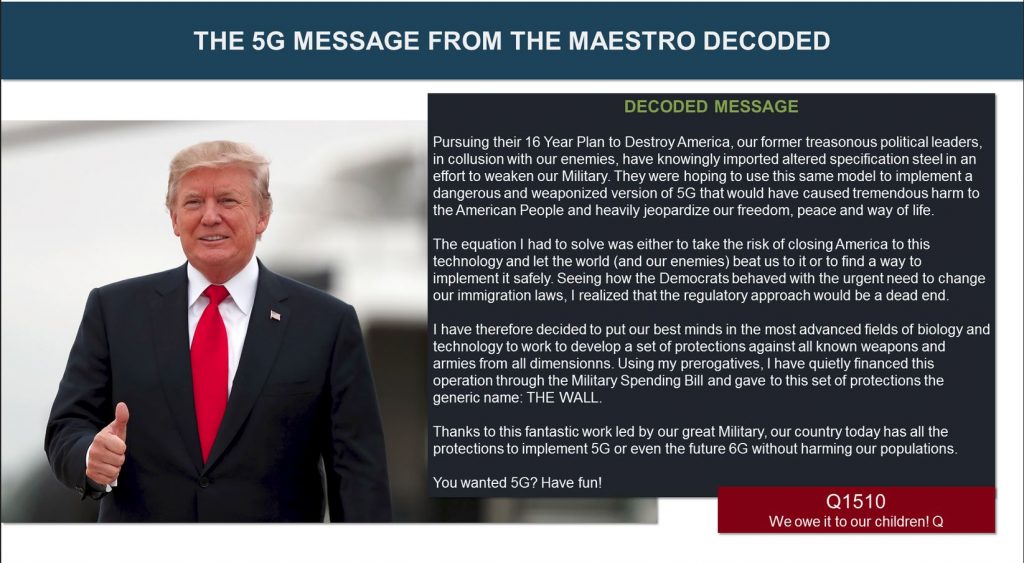